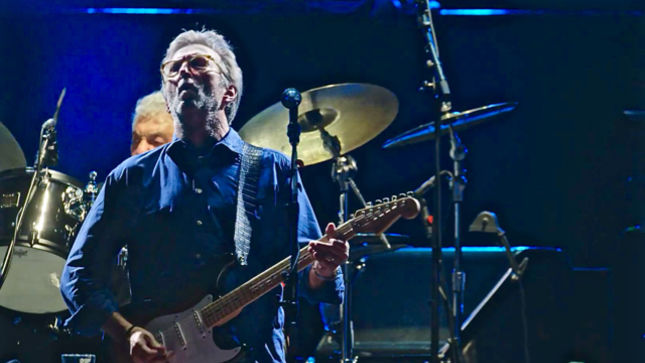 On November 13th, Eagle Rock Entertainment will release Slowhand At 70 - Live At The Royal Albert Hall simultaneously on DVD+2CD, Blu-ray+2CD, and in a Deluxe Edition. This landmark release captures a very special Eric Clapton performance celebrating his 70th birthday at his favourite venue and includes career defining tracks like “Cocaine”, “I Shot The Sheriff”, “Layla”, “Wonderful Tonight”, “Crossroads”, “Tears In Heaven”, “Hoochie Coochie Man” and more.

The fantastic Deluxe Edition contains the DVD and 2CDs of the 2015 show plus a bonus DVD of Eric Clapton performances at the Royal Albert Hall across the years. The Cream Farewell Tour from 1968, the Journeyman tour from 1990, a UN Benefit Concert performance with Zucchero from 2004, the Cream Reunion shows from 2005 and a Prince’s Trust Benefit performance from 2010 are all included and packaged with a 12”x12” 60 page hardback photobook.

2015 was a year of landmark events for Eric Clapton. Following his 70th birthday in March, he performed his 200th concert at London’s famous Royal Albert Hall in May, fifty years after his first performance there with The Yardbirds. Clapton’s 7-night run at the venue was acclaimed by critics and adored by the fans. The setlist blended vintage blues tracks and Eric Clapton classics from across his astonishing career.

As a bonus on DVD / Blu-ray formats, there’s an extra live track “Little Queen Of Spades”.

Eric Clapton has become synonymous with the Royal Albert Hall and this concert is the perfect combination of artist and venue creating a truly magical night for Clapton fans everywhere.