GENE SIMMONS Learns About His Mother's Experiences In Nazi Germany Through BILD Investigation, Sees Documetation For The First Time (Interview) 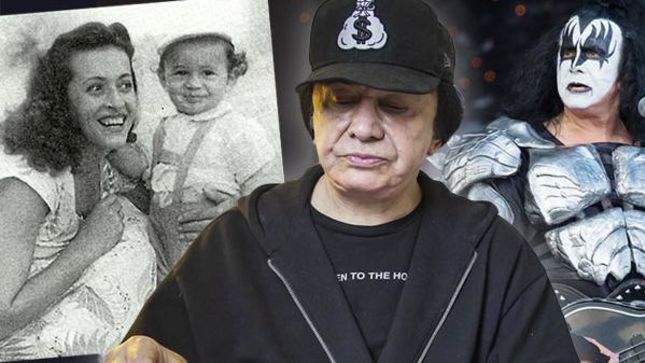 KISS icon Gene Simmons has checked in with the following update:

"Germany’s largest newspaper, BILD did an exhaustive investigation into the horrors of Nazi Germany’s concentration camps of World War II. My mother, Flora Klein, was 14 years old when she was taken into the camps along with the rest of our family. Only my Mother survived.

Never forget. There were 2 million Catholics, 2 million Romani, 6 million Jews and countless political dissidents, and other non-Aryan victims. All taken to the gas chambers, or were shot or simply died from malnutrition and slow starvation.

Following is an excerpt from the moving, in-depth interview, which is a must-read:

Gene Simmons browses the folder that was compiled for him. It contains approximately 100 pages. The musician carefully reads every single one of them. Sometimes he sighs, with a brief “Yep”.

BILD am Sonntag searched for files about Flora Klein in several archives. With the rock star’s permission, we also read a file of the former Restitution Office in Koblenz. This discovery is a touching historical document. The file is written in sober words, addressed to a German government agency. After the war, Flora Klein (later married, surname Witz), applied for financial compensation for the suffering she experienced under the NS dictatorship. “Prior to the beginning of the persecutions, I was living in Budapest, at no. 5 Kemeny-Zsigmond-Gasse. As of March 1944, I – like all Jews in Budapest – had to wear a yellow Jewish badge on my chest at the behest of the German authorities. I was not allowed to leave my apartment without this badge for Jews. I had to abide by the prescribed curfew and was not allowed to leave the city. Violating these provisions was severely punished. In May 1944, I was assigned to the ‘Yellow House’ in Sziget-Strasse and had to continue to wear the badge for Jews.”

The tough rock star has to fight back tears. His finger points at a different name. “That’s my grandmother, Ester Blau. My mother told me that they drove the old people into the gas chambers first. My mother spoke of her last conversation with her mother. They touched each other’s hand, and then – gas chamber.”

The singer remains silent. Then he continues: “My mother told me why she had survived. When she was a 12-year old girl, she came to a hairdresser and learned how to cut hair. The SS commander’s wife needed someone to do her hair. She asked several girls: ‘Do you speak German?’ The girls raised their hands and said ‘Yes’. Whoever raised their hand was sent to the gas chamber”. The KISS band leader (100 million records sold) recounts: “My mother spoke a little German, but she didn’t say so. That was the reason for why she was chosen. When she was doing the hair, the commander’s wife thought she wouldn’t understand anything. But she did.”

Is he worried about recent developments? Simmons: “It can happen again and again. That’s why you have to talk about everything. When Jews are advised to no longer wear the kippa on the streets. At least this is being addressed. The same applies to the Muslims. As long as you talk about things, there is a chance. When you see cockroaches in the kitchen, you must point the light at them so you can see them clearly. And you must drive them out of the light.”

Below is the link to the translation from the original German. A news segment is available below in German; Simmons is subtitled in the piece.