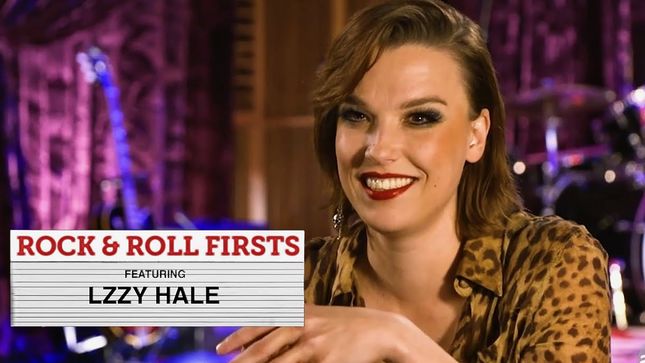 AXS TV recently released the video below, along with the following message:

"We're pleased to announce that Lzzy Hale is the newest member of the AXS TV Family! Get to know the host of A Year In Music and lead singer of heavy metal band Halestorm on At Home And Social!"

AXS TV's A Year In Music is back with 12 all-new episodes featuring in-depth profiles of the music and culture that defined 2001, 1998, 2008, 1986, with Halestorm’s own Lzzy Hale making her TV hosting debut.

Starting on Sunday, October 4, A Year In Music provides a unique and informative exploration of some of music’s most definitive years. Each episode puts the spotlight on a different era of music, viewing the year’s hottest bands, biggest albums, surprising breakups and monumental breakthroughs through the lens of the political and social happenings of the time to provide a fascinating look at how they impacted and influenced each other.

Season three highlights include in-depth profiles detailing how the music world came together in 2001 following the terrorist attacks on September 11th; the landmark music scene of 1998, which saw the release of the breakthrough album The Miseducation Of Lauryn Hill and the rise of MTV’s hit TRL series, which helped launch the careers of pop superstars such as Britney Spears, *NSYNC and Christina Aguilera; and the pop renaissance of 2008, which saw the emergence of current powerhouse performers such as Lady Gaga, Adele, Katy Perry, Rihanna and Beyoncé, and the election of Barack Obama; as well as the inspiring world anthems of 1986, fueled by hits such as “We Are The World” and “True Colors,” and the Hands Across America movement; and the bitter East Coast vs. West Coast rap rivalries of 1996 which came to a head following the death of hip-hop trailblazer Tupac Shakur.

In the words of our AYIM host herself, “Music is a true passion of mine, and I have always been intrigued by how it so perfectly reflects the social and historical happenings of the time in which it is created,” Hale said. “Hosting A Year In Music is a dream come true for me, as it allows me to both discuss and learn about music’s impact on history and then share that knowledge with music lovers across the world. I am grateful to AXS TV for this incredible opportunity and I cannot wait for it to air!”