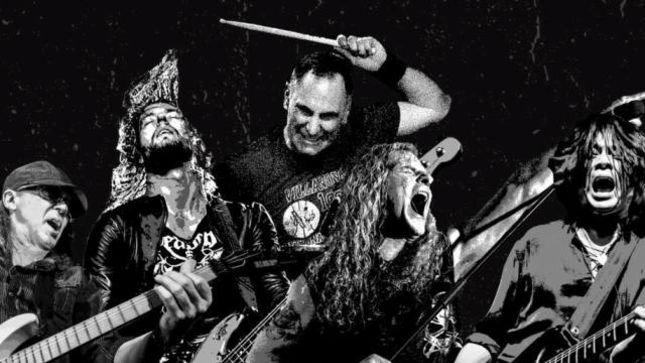 In the latest episode of the 80’s Glam Metalcast, Heavens Edge vocalist Mark Evans discusses the band's appearance at the most recent Monsters of Rock Cruise, and he revisits their 1990 debut album

How the Monsters of Rock 2020 Cruise went

Evans: "It was amazing. We got it in just under the wire before everything shut down. For us, getting to do the things we have over the past 7 years since we reunited have blown as away. To be a part of it and seeing our name on a T-Shirt with Extreme, Night Ranger, KIX and all those bands is just awesome."

Evans: "We will definitely do more shows. We’re keeping our fingers crossed that M3 still happens. Once they open things up, I’m hoping to book something locally in Philly in the fall. Reggie and I are writing. It’s a much slower process than it used to be. We’re not as prolific as we used to be back in the day. We really like the stuff we’re writing and hopefully we’ll be able to get together with the rest of the guys soon. If it’s not a full record, than maybe just an EP. "

On the debut Heavens Edge album

Evans: "I’m still really proud of it. I think producer Neil Kernon did a great job. I think a lot of the albums from that era have a dated sound, but I think ours still sounds fresh. I love getting out there now and still performing those songs live."

Evans: "No, we wanted 'Find Another Way' to be the first single. The record companies plan was to get one of the heavier songs out there first to get it on Hard Rock radio and build it that way. Then we would come back with the 'Find Another Way' as the second single and that would be the icing on the cake. We thought we should do the icing on the cake thing first and make your best impression. I didn’t agree with that, but did ok for ok for us. Unfortunately, when your dealing with the president of the label, you don’t have a lot of say. The 'Find Another Way' video was halfway done when we ended up having issues with Columbia Records. We’ve tried to get the footage of what they filmed, but no luck on that."

Evans: "The president of the label told us he just signed this band called Alice In Chains. This is the future and you guys are the past. They shut it down. That was the end of it and the record was actually doing well. They just decided that grunge was the future and that’s what they were going with. I was the first to say I couldn’t do it anymore. We just didn’t mesh with what was out there at that point. I still needed to make money, so I ended up starting a local cover band. I did that for a few years and then I just walked away, I was done."