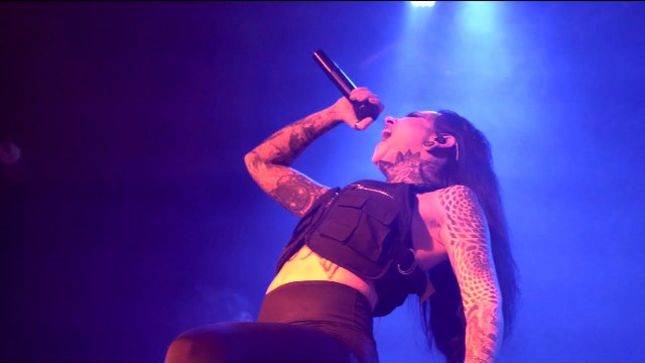 Ukraine's progressive groove metal frontrunners Jinjer finally released their very first official live album, Alive In Melbourne, on November 20th via Napalm Records. The album shows Jinjer at what they do best: smashing crowds to bits like very few bands can. Recorded on March 5th, 2020 on the Australian leg of their highly successful Macro World Tour, the show was one of the last performances for Jinjer, as well as the rest if the world due to the Covid-19 pandemic. Alive In Melbourne features 17 of Jinjer's heaviest hitting tracks including "I Speak Astronomy", "Noah", "Pit of Consciousness", "Words of Wisdom" and their breakthrough single, "Pisces".

As an added bonus and a surprise to their fans, Jinjer premiered the complete Alive In Melbourne concert video on Youtube for free. Check it out below in its entirety.

Alive In Melbourne is not only a live album but a very personal project of Jinjer's enigmatic and outspoken bassist Eugene: “When this idea first came about, never could I imagine that it would grow into the project that it has become. First it was supposed to be a single video or maybe 1 or 2 more, then it was meant to be an online concert video for Knotfest.com …. and now, after 6 months of planning, reacting and fighting to get this little piece of heavy metal history out to our fans and friends: Alive In Melbourne is out! From picking the cover artist Gabriel Nicoletti, to writing the very intense and personal band history in the linear notes … this album was not only something that I felt that our fans deserved in these strange times but it also helped me get through some of my own darkest times during the first Covid-19 lockdown. This was a moment in time that none of us will forget anytime soon.”

Alive In Melbourne and subsequent videos were filmed on March 5 this year during their debut Australian tour with the pandemic hot on the heels of their Macro World Tour, which would sadly, along with the rest of the musical landscape come to a screeching halt a week after the Melbourne set was captured for on film. Still, with Jinjer's sheer will, drive, determination and never give up attitude they were able to turn the madness of this year into a positive.

Bassist Eugene Abdukhanov comments: "It‘s still pretty incredible that 4 Ukrainians travelled 14,770 km just to sing in their native language... to the welcoming ears, eyes and open arms of Melbourne. This night will forever be burned in our hearts and the beat of "Retrospection" fit that night like never before. Shows like this should happen each time we perform and we cannot wait to get back on tour to make sure that happens every night. Until then just enjoy this moment in time called Alive In Melbourne."

Alive In Melbourne is now available for here in various lavish editions.

Intro
"Teacher, Teacher!"
"Sit Stay Roll Over"
"Ape"
"Judgement & Punishment"
"I Speak Astronomy"
"Who Is Gonna Be The One"
"Noah"
"Retrospection"
"Perennial"
"On The Top"
"Pit Of Consciousness"
"Home Back"
"Words Of Wisdom"
"Pisces"
"Captain Clock"
Outro