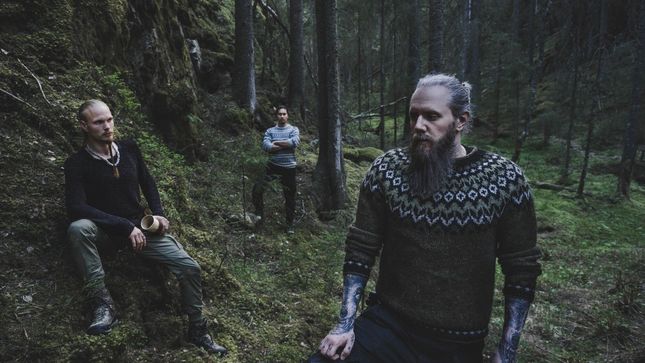 Swedish experimental black-metal band, Ofdrykkja, has returned from the bleak abyss to release their third full-length album, Gryningsvisor, on November 29 via AOP Records. The band has debuted the record’s latest offering, “Swallowed By The Night”. A lyric video can be seen below.

Commenting on the song, Pessimisten (vocals, horns) says, “The lyrics of 'Swallowed By The Night' is written in short sequences, like nightmares a sub conscience would create, based on the current state of mind. Stories made out of unprocessed emotions. It is truly a dark song, as dark as the night - but even the longest of nights will have its dawn, and while this song tells the stories of a long struggle, it is in fact about those first, warm sun rays piercing through the trees, after a very long and cold night.”

Formed eight years ago out of necessity to cope with agonizing depression, debilitating addiction and endless pain, Ofdrykkja has seen the light amongst the darkness for their latest record, which translates to “Ballads At Dawn.” After years of self-inflicted turmoil and suffering, the trio has found solace in healing and self-reflection which is heard on their latest evolution, Gryningsvisor.

Pre-order the new album in Europe, or North America.

Eight years ago, three darkness consumed men seeked to ventilate their seemingly endless struggle through addiction and mental illness conjured their first album "A life worth losing". Drabbad was gunned down by police and spent a three year prison sentence, with most of the songs on their second album written from within the prison walls. Having hit rock bottom, the band sought a way out of that dark wilderness, releasing "Irrfärd" (which translates to 'Aimless journey'). Following the release the band went their separate ways to pursue personal journeys that eventually led them to find peace in sobriety and awakening purpose, and ultimately to their forthcoming record, Gryningsvisor.

Drabbad adds, “Ofdrykkja has always been an instrument of therapy for us, and therapy exists to help one evolve. It would serve us no purpose to walk in old footsteps, and neither would it be authentic to force it. We hope you appreciate our evolution, both personal and musical.”

This album was recorded in Studio Cave by Pontus Ekwall and in home studio between January 2018 and August 2019. Mixed & Mastered by Ahlström. All artworks included were painted by Alessia Brusco and digitally edited by Drabbad.