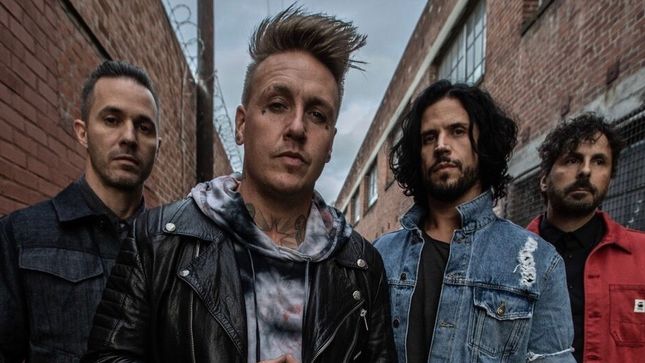 Papa Roach have released an official music video for "Come Around", a song from their 10th studio album, Who Do You Trust?, out now via Eleven Seven Music. Order the album here, and watch the new clip below.

The video features footage from their August 11 performance in New York, NY, featuring longtime fan Mark Moreno, who has followed the band since 2000. It begins with Jacoby saying, “This music gives me a connection to something bigger than myself. This music connects me with people. This music gives me purpose.”

Director Bryson Roatch visually tells the story of both the band and Mark, in their journey to do what they love most, sharing emotional moments on the way. One particularly touching moment is Mark visiting the gravesite of his sister, Elizabeth Santana Mercado, whom he lost to colon cancer in 2016. "She was my control switch. She could change my mood real quickly," he explains. The video’s caption notes that thanks to music and a good support system (Mark is shown with family and friends), you can overcome anything. At Mark’s 57th Papa Roach concert, Jacoby presented him with a gift - a platinum Papa Roach plaque in honor of Elizabeth - and thanked him for his support by giving him two golden Papa Roach “Por Vida” (“For Life”) passes, good for tickets to any Papa Roach show, anywhere in the world, for free, for life.

“We knew ‘Come Around’ was one of those special songs when we got done with it. We walked away from the track and kept humming the melody to it, and it’s just one of those things that gets stuck in your head. Lyrically, this track’s about sticking with your friend through thick and thin, or your loved one, as they’re spiraling out.” - vocalist Jacoby Shaddix

The 12-track anthemic album Who Do You Trust? features heavy rhythmic guitars and catchy hooks on “Who Do You Trust?” and “Renegade Music” with melodic tunes on “Not The Only One” and emotionally-charged lyrics throughout the album. The album is produced by Nick “Ras” Furlong and Colin Cunningham. The track “Top Of The World” is produced by Jason Evigan.

“Our goal for our 10th album was to push ourselves even further into genres that inspire us most. We have reached the place where we always wanted to be, creating new and exciting music.” - bassist Tobin Esperance

“Papa Roach’s new album showcases the band’s eclectic tastes, while maintaining their true identity as a now legendary act. The themes on this album is to take risk. When you’re tired of ‘fitting in’, the band stands out. “Not The Only One” is one song that stands out as a new wave anthem in the pool of Active Rock.” - Producer, Nick "Ras" on the album, Who Do You Trust?

"The Ending"
"Renegade Music"
"Not The Only One"
"Who Do You Trust?"
"Elevate"
"Come Around"
"Feel Like Home"
"Problems"
"Top Of The World"
"I Suffer Well"
"Maniac"
"Better Than Life"

"Not The Only One" video: