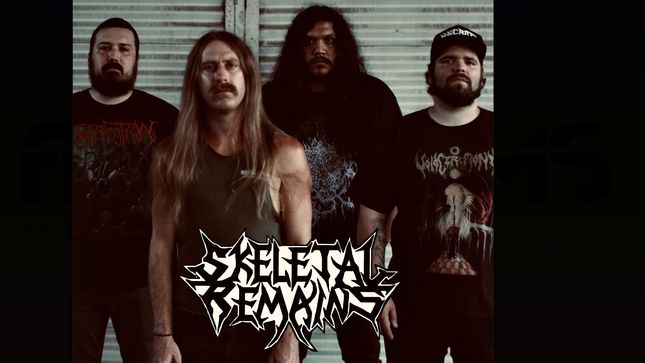 The band comments: “We’d like to announce that we now have a complete line up again, please help us give a warm welcoming to our new drummer Pierce Williams (Ænigmatum, Torture Rack). We are all very excited to get out there and play this new material for you as soon this pandemic is all over! We would like to send a big thanks to our good friend Charlie Koryn who helped us out in the last couple of months with the new album.”

Footage of Skeletal Remains blasting through "Congregation Of Flesh", "Dissectasy" and "Beyond Cremation" with Pierce on drums has been captured by Allen Falcon at Birdcage Studios, and can be viewed below:

Furthermore, the band’s back catalogue, originally released through FDA Rekotz, is back up on digital platforms and will be reissued in 2021 physically through Century Media Records.

Says the band: “We’ve been working on represses for our first two albums Beyond The Flesh and Condemned To Misery and those will come sometime next year! Both records have been remastered by Lasse Lammert (www.LSD-Studio.de) from Germany and you can already check them out on all streaming services, so go give them a spin!”

Order The Entombment Of Chaos here.