STRYPER Frontman MICHAEL SWEET - "I Never Got Into This For The Money; It Was Always About The Love Of Music" 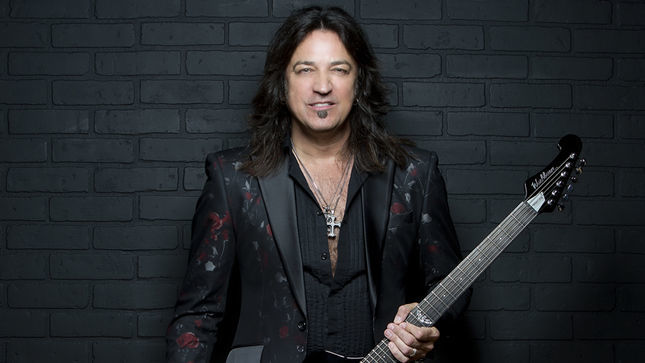 Building upon the success of his 2016 release One Sided War, Stryper frontman Michael Sweet returns with his tenth solo studio release, aptly titled Ten. He recently released a lyric video for the song "Better Part Of Me" - found below - and has posted the following message:

"So far the response for 'Better Part of Me' has been amazing! Most everyone seems to be enjoying the 'heavier' mode that I’m in lately. For every 100 positive comments, there’s been a few that have stated that this sounds like Stryper. When I read or hear things like that my first thought is and always will be - 'Well, I do sing, play, write and produce for Stryper.' Since 1983.

I have many opportunities beyond Stryper. I pass on a lot of them but I also follow through with some of them. Since this is my 10th solo album, you know that I’ve always taken chances and thought outside the box when it comes to solo albums. This time around I decided to stay closer to home in regard to making an old school metal album. Damn if you do, damn if you don’t right?

I don’t do it for the money. There’s just not enough to be made to even think about that. I put about 2 solid months of time (spread out over 3 months) into each album. I walk away with about 7-10k (depending upon whether it’s an MS album or a Stryper album) yet I invest my entire life into it. I make a little in royalties/mechanicals on the back end but at the end of the day it’s not a real money maker, especially these days. The music 'business' has for the most part dried up.

I never got into this for the money. It was always about the love of it. Music is in my DNA, in my blood literally. I’m made of music and always will be. That’s why I do so much. If I could I would record 3-4 albums a year. I enjoy the process more than anything else. It’s what I do and who I am. I’m constantly trying to juggle between the on time of Stryper and the down time of Stryper. Stryper is my priority but we also have a lot of time home. I won’t sit around with a remote in my hand. After a tour the first thing I think of is 'what’s next?' I guess I am a workaholic to some degree. I also have a never ending flow of songs in my head and I need to create and get them out so I can wipe the slate and do it again. That’s just me.

I know I don’t owe anyone an explanation or an apology for fulfilling my life and my calling, but occasionally I want to respond to nonsense like this (see below). I make music because I can and I’m eternally grateful for it. I do whatever is on my heart at the time. To all the naysayers out there - stop because you won’t win!

One last thing, wait till you hear the rest! The next song coming is called 'Shine' featuring Ethan Brosh and as Paul McNamara (Spirithouse) put it: 'Its probably my favorite song that you’ve ever done.' It’s one of mine too! It’ll be here on 9/3 and it’s a doozie.

I never want to forget about the positive folks and comments (which far outweigh the negative ones) - Thank you! You keep me going and inspire me to do better. And I will! Much more to come...."

The new album is scheduled for release in North America on October 11 via Rat Pak Records and will also be available in Europe via Frontiers Music Srl. Pre-order here, and watch a lyric video for the song "Better Part Of Me", featuring Arch Enemy guitarist Jeff Loomis, below.

On the subject of guest musicians Michael comments: “There is a different player appearing on every song. It started out where I was just going to have a couple of guest appearances on it, then I decided that it would be really interesting to bring in different players for every song. I started putting names out there and reaching out to people, and they started agreeing to do it. And then I had guys reaching out to me."