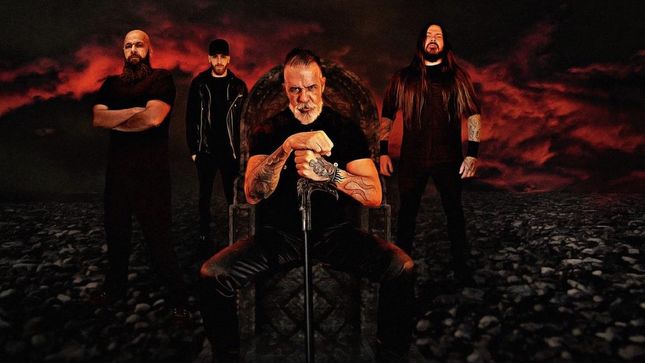 The Rise Of Heresy, the pummeling new EP frpm Brazilian death metal unit The Troops Of Doom, will be released Friday, October 9th via Nuclear Blast's digital subsidiary, Blood Blast Distribution. You can stream all 22 minutes of the EP now, ahead of street date.

The Troops Of Doom features guitarist Jairo "Tormentor" Guedz, a current member of The Mist as well as a former member of Sepultura's original lineup, playing author and co-author to the band's classic albums Bestial Devastation and Morbid Visions. He also collaborated on some of the compositions that appear on Schizophrenia. Joining Guedz is bassist/vocalist Alex Kafer (Enterro, Explicit Hate, Necromancer), drummer Alexandre Oliveira (Southern Blacklist, Raising Conviction), and guitarist Marcelo Vasco (Patria, Mysteriis, acclaimed graphic artist for the legendary likes of Slayer, Kreator, Machine Head, Soulfly, and Hatebreed). The Troops Of Doom's goal is to revisit the essence of '80s style death metal, exploring a more primitive sound that takes listeners back to that era, while remaining fresh and genuine.

Comments Guedz, "I don't speak only for myself, but on behalf of the band, when I say that this moment of this first EP release is one of the most anticipated of our lives. It's something really special for us and the result of a lot of dedication and sweat, especially when it comes to this critical and unusual moment for the entire world, when The Troops Of Doom was born. It was something I've dreamed to do for many years and now, and the project is finally a reality, concrete and wonderful, where I can dedicate myself entirely. We hope everyone enjoys the record and I can say that this debut EP is just a small sample of what is to come. We are incredibly excited about this work and all the awesome feedback we got, even beyond of what we excepted, with thousands of great reviews and support, that gave us a killer boost. We are already working on new songs for the full-length album, scheduled for the second half of next year 2021. Stay tuned! For now, listen the EP loud and I hope we can see on the road soon!"

The Rise Of Heresy, which features four original songs and two cover versions of Sepultura classics, "Bestial Devastation" and "Troops Of Doom," was mastered by Øystein G. Brun (Borknagar) at Crosound Studio in Norway.

The Rise Of Heresy will be released digitally. For pre-orders, head here.

The Rise Of Heresy tracklisting:

"Between The Devil And The Deep Blue Sea" lyric video:

The Troops Of Doom lineup: