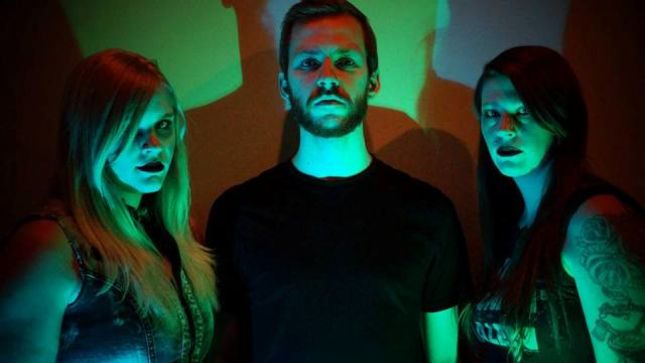 Kittie drummer Mercedes Lander has launched a new band called The White Swan, which sees her singing as well as playing drums. The band has posted new behind-the-scenes video which can be viewed below.

"This is a new one called 'North Carolina' introducing our live drummer Sam Charles aka Samhole."

Death By Metal STL recently spoke with Mercedes and bassist Kira Longeuay about forming the band and their plans for the future. An excerpt is available below.

On the band name:

Mercedes - "The White Swan was oddly enough named after a T-Rex song.  I’m a huge fan and went on a T-Rex binge and thought 'Wow, that would make a great band name.' I think Marc Bolan has a really special part in Rock'n'roll history."

Mercedes - "As of right now I write everything but  if Kira and Shane want to bring songs to the table, I’m always open to that.  So Far out of the eight songs that we do have, with the exception of jet, I’ve done all of the heavy lifting on them and everyone is okay with that.  We’re a team first and foremost.

Kira - "Mercedes so far, I'm a song-writer by trade as well so I'm sure as we progress both Shane and I will bring in ideas. We work so well together that whenever Mercedes brings in a new idea it clicks right away."

Mercedes - "Lots of life events and beer helped to shape The White Swan. We basically are a band created out of necessity. I had all these songs that I couldn’t use for any other band I was in at the time so I just decided to go forward with making some demos. Both bands I'm in are kind of inactive right now and I start to get really antsy if I don’t write music for long periods of time."

Kira - "I've always had a love for doom, metal and punk rock but I'd never found anyone who had the same passions for music that I did until I met Mercedes. I've been writing songs since I came out of the womb pretty much so I've always needed an outlet to write and play and the first time Mercedes showed me the riffs for Blood I knew right away that this was a project that we needed to seriously pursue. We both weren't doing much in the realms of music or band wise so it really just made sense to get together and start something new and heavy."

The White Swan's has confirmed a string of shows for December and January. Their schedule is as follows:

Stream the songs from Anubis below, click on the player or go to this location to purchase the EP.

"'Illuminate'  is more or less about the feeling of profound loss, says Lander. "I felt like I wanted to ask all of the questions you would want to ask, or things you would want to tell someone if you've been separate from  each other for a long period of time. 'Blood' originally started as a song I wrote for a friend for her solo album. Gradually I changed the key and wanted to keep it for myself.  The song is about all of the different emotions you cycle through with any relationship, platonic or not."

"In March 2016 we started compiling riffs, songs, and demoing ideas. One night I was driving home from the yoga studio I teach at and 'Jet' came on the radio. Instantly I was like 'Damn, this song is heavy' and asked Kira and Shane if they would be cool with a cover version of the song. From there we started working on a version that would fit The White Swan."