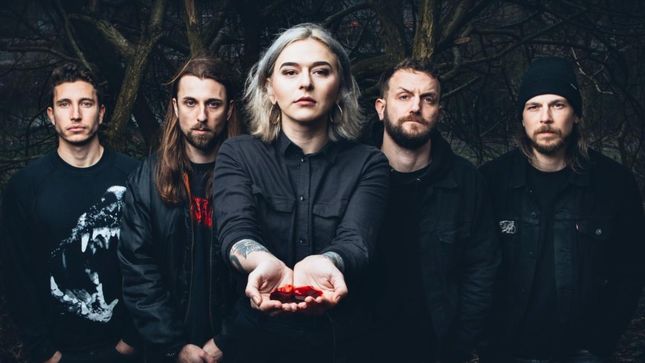 “Slayer Of Holofernes” is included on new album Primeval, released today via Prosthetic Records, which combines re-recordings of two early EPs, Defy The Tyrant and The Primal Chaos, plus two new tracks.

The band elaborate, "Primeval is a collage of different releases that are interwoven with a reinterpretation of religious imagery and criticism. ‘Slayer Of Holofernes’ follows that theme. The scene from the book of Judith, follows the protagonist’s character and actions as a challenge to the dominant patriarchal narrative within religious writings.

“We wanted to create a connection between this powerful tale and the art that Eliran Kantor has created for 'Primeval' through the use of water, depicting Larissa in an ethereal way and through inflicting pain via various methods of water torture on the male character."

The 11-track album will feature re-recordings of tracks from their early EPs, Defy The Tyrant and Primal Chaos, as well as two brand new tracks. The first track from Primeval is a re-working of "Defy The Tyrant", which is streaming everywhere now, and features an accompanying video which can be viewed below.

Since 2016, Venom Prison have gone from strength to strength; debut full length Animus catapulted them into the consciousness and record collections of discerning death metal fans the world over. Their follow up release, Samsara, solidified them as a serious force to be reckoned with in the world of metal, paving the way for a string of high profile shows and festival slots around the globe. On Primeval, Venom Prison revisit the earliest days of the band, capturing the same intensity and visceral energy they possessed from day one and adding an additional layer of sophistication to their sound by re-recording, re-mixing, and re-mastering those old favourites with producer Tom Dring in late 2019. Artwork is once again handled masterfully by Eliran Kantor.

Of their decision to revisit their earliest tracks, the band explain, “Primeval is a snapshot of the earlier days of Venom Prison, simpler times where we locked ourselves in a room for days on end to create the early incarnation of what would be our first collection of songs.  Our first release/demo Defy The Tyrant was subsequently born, and we never thought this would lead onto being picked up by Prosthetic Records or touring the world. This became a starting gun for touring and festivals in between the studio to write, including what would become The Primal Chaos.  Given the current climate and the global pandemic situation we felt it was appropriate to package together our early material so that it is presented in a form of how it was always intended. This is what you hear now. Our previous EP’s plus two new tracks to give you an idea of what is to come in future.  Our new chapter awaits, the grind must continue.”