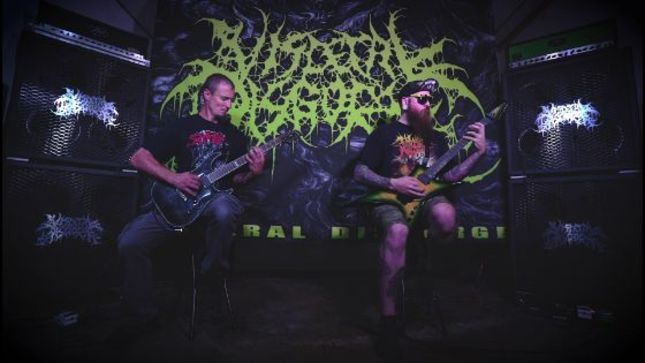 American death metallers Visceral Disgorge have posted a guitar playthrough video for their latest single "Necrotic Biogenesis". The song is taken from the upcoming album Slithering Evisceration, out September 13th on Agonia Records. Watch guitarists Steve Miles and Charlie Marvel as they perform the track.

Vocalist Travis Werner commented on the new release: ""We had a lot of bumps in the road over the years that we had to overcome, but I think that essentially it made the band stronger and more ferocious over time.This album is much faster and more aggressive than our last album, with lyrical themes inspired more by Science Fiction and Cosmic Horror as opposed to the old hack and slash. V.D. is back... the beast has awaken from its ancient slumber ready to obliterate all who stand in its way!".

Pre-order your copy now at this location.

Catch Visceral Disgorge on tour at the following shows: