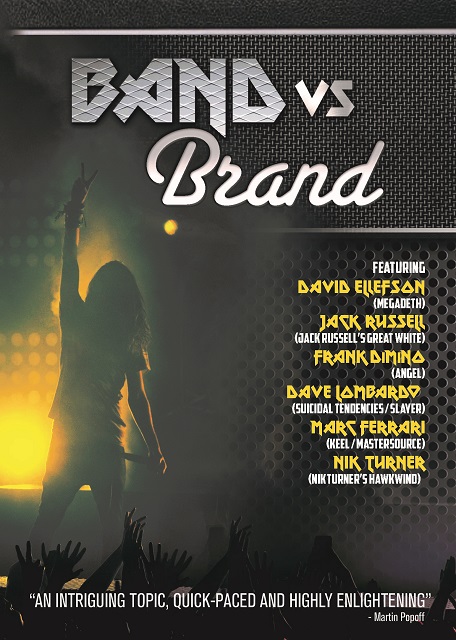 “It’s a touchy subject,” says drummer Dave Lombardo (Suicidal Tendencies, Slayer) talking about the issue of a rock group’s brand wielding more power than the musicians themselves. This 90-minute documentary, directed and produced by Bob Nalbandian (Inside Metal), features interviews with Jack Russell (Great White), Frank Dimino (Angel), Marc Ferrari (Keel), Gus G (Firewind, Ozzy Osbourne), and David Ellefson (Megadeth) amongst other artists. Various managers and label reps also offer their thoughts on the importance of name recognition. KISS are the undisputed masters of branding, and justifiably discussed; yet none of the members, past or present, appear on camera.

Not in the same league as any of Sam Dunn’s films, the dialogue within Band Vs Brand wavers into groups changing singers (Queen, Journey, Black Sabbath), tribute bands, band disputes and litigation (Venom, Bad Company), song publishing, technology and the changing industry, all the while putting the emphasis on the business side of music. Wrapping up with the controversial new practice of holograms (Ronnie James Dio), Band Vs Brand would have benefited from a few more A-listers digging a little deeper and getting more specific, rather than broadly summarizing. And the side box devoted to band-branded wine and beer (Geoff Tate, Iron Maiden) that appears while the credits are rolling seems like an afterthought, as alcohol has become a significant money maker for musicians, yet it was almost left out of the film.