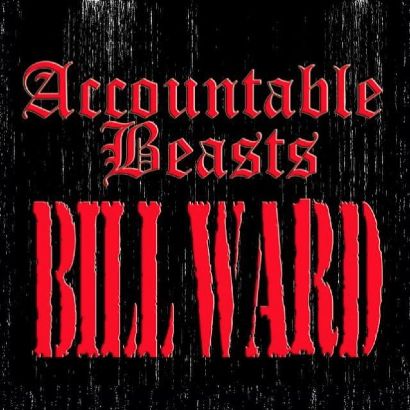 Was a little worried when I saw the sketchy album cover, and when folks were calling it Bill Ward Band (hate that), but alas, we can all call this Bill Ward, because that’s what the cover says. Once inside the album and the flood of emotional opinion I had when I heard 13 was confirmed—Bill should have been in that band and written the whole thing, and it wouldn’t have turned out to be the safe record for Halloween it was. Now, I’m saying that assuming that all of the courageous, pioneering, harrowing, progressive, future-forward doom metal writing all over this masterpiece is from the pen of Bill. Not knowing for sure, I nonetheless have no reason to doubt it, because Accountable Beasts is fortunately an extension, a bold step forward, from When the Bough Breaks, which, incredibly, represented the same highly intellectual beeline of thought from Ward One: Along the Way.

Words fail me, but I’ll try. Fact is, I’ve never heard music constructed, arranged, played, recorded—nor lyrics like this—anywhere else, other than maybe Sleepytime Gorilla Museum. The most feverishly creative bits of When the Bough Breaks hint at it, as does the masterful Queen-meets-John Cale “Straws” single (mercifully included on the album), but almost all of Accountable Beasts is face against that hot glass. So I necessarily must repeat what I’ve said before: Bill is the Roger Waters of heavy music. But to add to that, his incredible and empathetic voice, with age, he’s now added evocations of Jack Bruce to his few parts Roger Waters and lotsa parts Bill Ward, who surely has got to be heralded as a great vocalist by now. Addressing the doom, it’s creepy and complex of dimension.

It starts with the contours of the finest goth rock, it picks up with the vibes of Animals and The Final Cut, but then Keith Lynch’s guitars... they are used often for colour, not so often in a lead sense, but riffs separated by lots of space. And when he plays, he dents yer head and leaves a toxic impression. It’s as if a little is enough, because large doses might darken your whole life philosophy toward Magazine, who I’ve called the Pink Floyd of post-punk, but yes, very, very dark. I dunno, and I’m pretty sure I said this before too, but Bill as a solo artist is like Pete Townsend at his courageous and lest predictable, namely circa The Endless Wire, which is a fascinating blowing up of The Who.

A point on the production: it’s not as plush as When the Bough Breaks. While retaining a bit of that record’s expertly used overdrive, often, this record sounds simply rawer, which is both good and bad. There’s something about some of the cymbals that sounds cheap, and the feel is of open architecture and separation between instruments, too much at times, because there are a lot of weird sounds on here, and the writing is challenging—see “Leaf Killers” for example. But it’s also almost brilliantly Zep IV-esque at times, as we can hear on the paranoiac assault that is the title track, where cymbals and trashy snare dominate, and yet it’s so odd and so fresh, it sounds like a wily and deliberate move. I said post-punk, didn’t I? And the more I listen to songs like “D.O.T.H.,” I am indeed reminded of those richly depressive acts moved on from punk but just as fatalistic—Chameleons UK, Joy Division and The Cure—but again, with vaulted hard rock and prog ambitions.

You know, me an’ the buds talk a lot lately about Never Say Die, and how that record is getting a re-evaluation. Well, Accountable Beasts is very much in the vein of “Air Dance,” “Breakout” and “Swinging the Chain,” and even “Johnny Blade,” except thinking about Ozzy singing is 100,000 miles away from this record jarringly back into the real world. Bill sounds like an aristocrat in his massive Morgan library, in 1908, with brandy snifter, pondering life at a level too many layers removed from the ordinary. And it never lets up.

Late in the sequence, “Ashes”... I can almost picture Bill bringing a stack of blueprints to the band for each and every track, testing their patience with his mad cackling genius. I kid you not, this one song alone must have ten or a dozen nuanced bits of production genius that would have Steven Wilson or Kevin Moore scratching their heads. And the crazy part, is that somehow all of these near impossible to describe songs, cohere. In other words, all the points an’ pointers of the inarticulate description above, incredibly, they apply to every song on the album, as if The Final Cut could be Hadron collided down to four or five minutes, in nine novel, provocative ways, and then mainlined to yer mind.