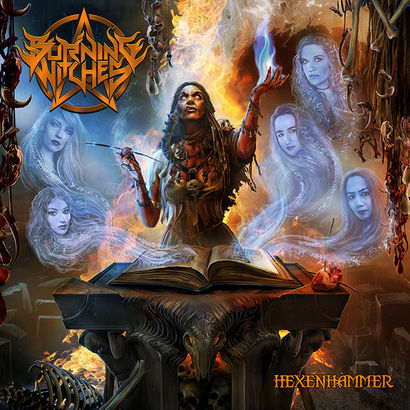 Fast rising Swiss misses issue their sophomore effort, albeit the first specifically for a major label. Once more abetted in the control room by Destruction bassist/mastermind Schmier, the ladies return with nine originals ("The Witch Circle" opener is merely a 1:38 table setting) and a closing cover of Dio's "Holy Diver" (impressive live rendition heard last summer @ Bang Your Head). Lyrics surround the 1486 book Malleus Maleficarum (aka The Hammer Of The Witches, or, in German: Hexenhammer), which legitimized the hunting of witches. although modernized to recount tales of oppression, violence on the weak and manipulation of the truth. Timely, eh?

Don't let Seraina Telli's slight frame fool you, the woman can offer up both wicked cackling crone vocals, as on the opening "Executed"speedster, as easily as the forceful, but more tuneful, voice, heard elsewhere, especially the atypical, acoustic tinged, 4 Non-Blondes style ballad "Don't Cry My Tears". When she unleashes a trilling high pitched wail, as at the start of "Open Your Mind", it recalls Battle Beast frontwoman Noora Louhimo. The heavy stomper "Maiden Of Steel" is one of the standouts. In fact, the later half of the disc offers the strongest material, somewhere between old school Chastain and Crystal Viper. A prerecorded dungeon torture sequence precedes "Dead Ender", while gritty title track (which comes up on the digital playback as being entitled "Burning Of The Witches", even though promo literature clearly identifies it as "Hexenhammer", a lyric repeated throughout the song) features some of the best guitarwork herein. Chunky riffs on the corny, cannibalistic lyric "Maneater": "Stay for dinner, we know it's going to be a tasteful get-together"

Make no mistake, this is metal, not some tarted up all-female 80s project. However, since it's the first thing a majority of the metalhead community will hear, could have done with a bit more speed/aggression (like "Possession"), as it rarely gets above mid-tempo.