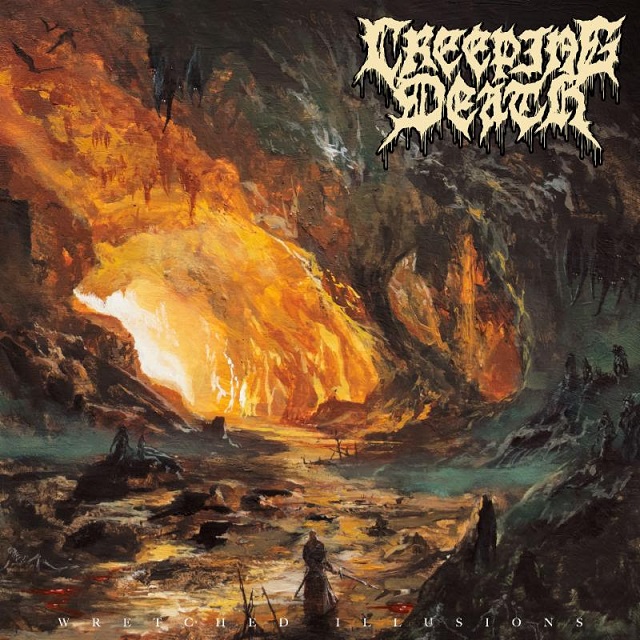 It’s so hard—it’s impossible—to hear that name and not think this band is some young-pup thrash crew, even after listening—even while listening!—to the knuckle-dragging DM Creeping Death lays down on debut Wretched Illusions. So, in short, bad choice for a band name, but good death metal being played, so, fine, we’re even.

This Texas four-piece lay down a very sturdy and no-surprises take on death that at times is so authentically Florida ’91 it’s almost alarming (see the excellent Obituary stomp and churn of “Captivity”; hear the open-space claustrophobia of “Bloodlust Contamination”, watch the members of Cannibal Corpse weep themselves to sleep over snoozing on that song title), Creeping Death nailing the vibe, the sonics, the playing just perfectly. When they get slow and sludgy, as on “Corroded From Within”, it’s with much success, although they can’t resist picking up to a polka two-step in that same song that would do any number of Swedish old-school bands proud. File next to Outer Heaven and Gatecreeper in the “upcoming DM” category, as Creeping Death prove on this great debut they love the genre and aren’t interested in progressing it, but are interested in keeping it alive. There’s just heart and soul for miles on this enthusiastic record, something that death metal fans know when they hear, meaning this one will be enjoyed by more or less every deathster who seeks it out.