FALCONER - From A Dying Ember 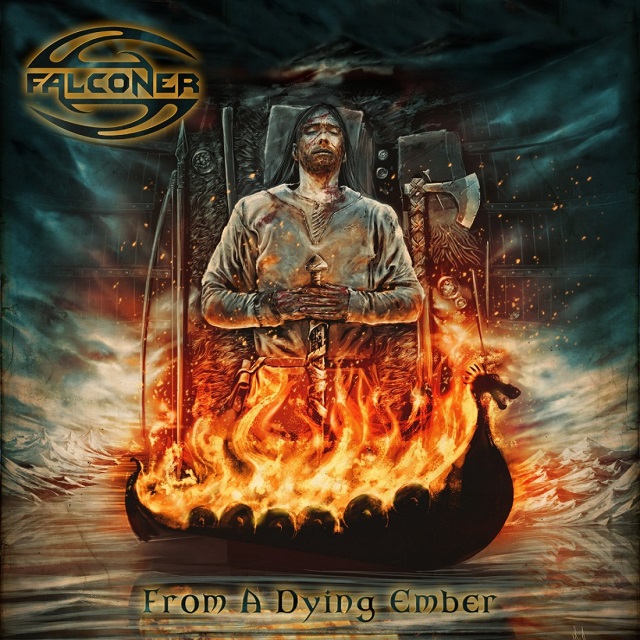 Been six years since the Swedes (who no longer play live) released a studio effort. In the meantime, mastermind/guitarist Stefan Weinerhall wrote and scrapped almost a full album worth of music before settling on a more diverse sound (even for Falconer). Two decades ago, when they burst onto a scene dominated by death and black metal, it was a breath of fresh air (well, at least to these journalistic ears). Since then, the folk/Viking sub-genre has multiplied exponentially, but the element that has always separated this lot from the others is vocalist Mathias Blad, a stage actor who moonlights as a metal singer. In the more melodic end of metal, a top notch singer is a must and Blad fits tighter than OJ's glove at trial. Moreso than ever, these eleven tracks, in total, feels more like a soundtrack to a Broadway play, ala Les Misérables, than a "metal' album.

Fret not, there are still a couple of galloping numbers, but they are ensconced amongst melodic (often minimalist) fife, bagpipes and fiddle. There's even swarm and some Hammond organ on the plodding stomp of "Thrust The Dagger Deep". The journey begins with mid-tempo "Kings And Queens", the guitars buzz like murder hornets invading a hive, but the pace is retrained, especially leading off. There's a hint of organ here, albeit nowhere near as dominate as the aforementioned. It's easily recognizable as Falconer, even before the acoustic guitar ending. Double bass drum driven "Desert Dreams" follow-up is more metallic, although as it blazes away, there's an undercurrent of high pitched fife, in the final third. "Redeem And Repent" is broken by recurrent, subtle lute/lyre/acoustic guitar minstrel section, come the chorus. Paradoxically, between the tambourine and fife, it boasts the longest electric guitar solo spotlight of the record. Lone bass introduces pedestrian, native tongue voiced "Bland Sump Och Dy", accompanied by fiddle. Piano and an otherwise a cappella Blad kick off "Fool's Crusade", with a medieval vibe courtesy of the barely audible instrumentation hiding buried in the mix. The piano and solo voice sections create the theatrical feel mentioned earlier.

Swarms bleat, acoustic strings and tambourine herald the short, instrumental "Garnets And A Gilded Rose" intermezzo, before bouncy "In Regal Attire" picks up speedy, riffing guitars. Pick of the litter for headbanging metal, but not devoid of essential Falconer hallmarks. Falsetto, piano and orchestral strings on the non-electric ballad "Rejoice The Adorned" should be in some Broadway production. "Testify" is the antithesis, another rapid played rocker, like a madrigal on speed. Fiddle commences the closing "Rapture" and remains an underpinning throughout, as the pacing quickens, tying a nice bow (pun intended) on the whole package. While the album title might hit the spot in terms of velocity as opposed to earlier platters that were ablaze), hope it's not a veiled reference to their chosen career path. That would be a shame!