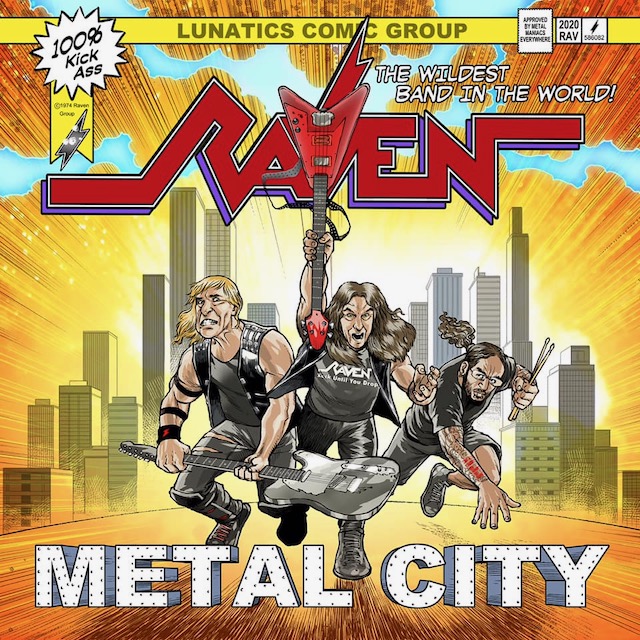 Given that there's a generation listening to The Beatles, Zeppelin and The Dead, even though their parents weren't born when those acts started, could definitely envision still listening to Raven (when I first started, 40 years ago), but would have been hard pressed to foresee the brothers Gallagher (Mark & John, not Noel & Liam) being a going concern: recording & touring. That said, Metal City (cool comic book graphic cover art) retains a closer lineage to those early Neat/Megaforce ‘80s discs than most of the catalog that's came afterward. No easy feat for guys in their 60s.

John yips and yelps across the speedy numbers, beginning with "The Power" lead-off. All kinds of whiz, bang, wallop effects (on bass AND guitar) for this one. Follow-up, "Top Of The Mountain" is like-minded, although the intensity has been heightened, slightly (from 8 to 9) as Mark goes off, on guitar. Repetitive, easy sing-along titular chorus, can see this one being a big crowd pleaser. While cautionary tale "Human Race" begins like a house afire, it also features the most sedate section of the ten inclusions. The title cut is mid-tempo, almost bluesy and autobiographic. More explosions of ear candy, from both stringed instruments. With opening yell and old school intonations, "Battlescarred" might be the Gallagher bros' mantra. All rather tame, until John says "Go!" as the guitar takes a cosmic journey and backing vocals echo "oh, oh.”

Mark's picking starts "Cybertron", the one I don't really get, so on to the next one... Guess who was the impetus for double bass drum delivered "Motorheadin"? Otherwise pedestrian "Not So Easy" features high pitched wailing and some lyrics seemingly directed at US politics: "Everyone loves it when the circus comes to town. You say you are the ring leader, but maybe you're the clown! Say you play the game to win, but you don't know where to begin. Had the trump card in your hand, but you never understand." High energy "Break" is readily identifiable as Raven, before "When Worlds Collide" closes things out, the antithesis of what that title portends. Strong album, a few new ones to add to the rotating set of onstage classics...once we can all get back into venues!