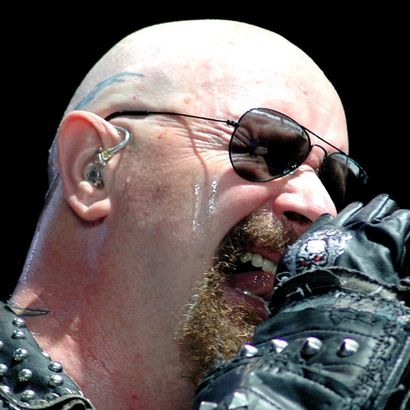 An unflinching tell-all tale: secret identity, repressed sexual urges, OD/suicide attempt, hepatitis, drunk driving conviction, addiction, rehab, arrested for lewdness in public restroom (ala George Michael).. true to the title, Judas Priest frontman Rob Halford outs himself, in more ways than one. Long a fan of his music, I stuck with the narrative, despite some uncomfortable moments. Felt his tragic psychological story deserved as much.

Shows that in the pre-Internet (everyone has a cellphone camera) era, despite Rock Hudson, Joan Crawford and Judy Garland, the fans had no idea what lurked behind the carefully molded public persona of those in the entertainment field. Unable to enjoy the benefits of their 80s success, Halford sadly lived a solitary existence, often drunk (and alone) either in a hotel room/bar or (typically unsuccessful) cruising for action. No wonder he's relishing a second bite of the apple (even if longtime pals Glenn Tipton and KK Downing are no longer around). Make no mistake, this is HIS story, not a band history. We learn more about the nuts (& bolts) of gay truck stop hook-ups than the details of Priest songs/recordings. After the early years, Halford can remember little specifics, either absent or mind-altered induced forgetfulness.

The first half of the book deals with Halford's life before the band, up until the mid-Eighties. An alcoholic prior to any musical career, with MTV's help/success, Rob adds coke-head to his CV. Momentous events like Live Aid and the US Festival garner little column space, although the former found the singer a boy-toy lover who ultimately took his own life. The PMRC is mentioned in passing, as is the longstanding rift between the two Priest guitarists (would have enjoyed Halford's take, especially now that both are out of the band and KK had his say, in his autobiography). Also sort of surprised there's nothing about AIDS: a gay man in the 80s? Especially after Freddie Mercury's death (one of his idols) and the fact Halford, earlier, contracted hepatitis from a sexual liaison.

He claims the announcement of a solo career led to the erroneous assumption he was quitting Priest (magnified by a misleading fax to management, hiring a new manager and while seeking a record contract for Fight, sending a letter to Columbia, as was required, disassociating him from JP). The final 70 of the roughly 350 pages deal with, in rapid fire succession, the Halford band, reuniting with Judas Priest, filling in for Ozzy (a show Brave Words honcho, Metal Tim and I witnessed, in Camden, NJ), Dimebag's murder, meeting the Queen, each successive album/tour, KK's departure/Richie Faulkner's discovery, Dio's death, firing/getting sued by former solo manager, the deteriorating health (and eventual death) of both Rob's parents.

The final chapter kicks off w/ Tipton's Parkinson's diagnosis (a disease which shortened the life of Rob's Mom), the band knowing as early as 2013. There's Firepower, the recruitment of Andy Sneap and the last time he saw Lemmy. The epilogue was written (added?) during the pandemic, offering a few hints to what the next tour might look like, admitting (that despite turning 70, next year), wants to continue Priest as long as he can. Good news for us fans! Rob admits to praying daily (although no real belief in a deity, just an afterlife) and is happily involved with the same man, for 25 years.

Sadly, this pandemic/year off cost fans' the 50th anniversary tour and, my words, not Halford's, possible appearances by former members (but Downing now has KK's Priest, with Tim "Ripper" Owens and time is the one thing Tipton's affliction doesn't allow). Hopefully 2021 will be a good year, for all.