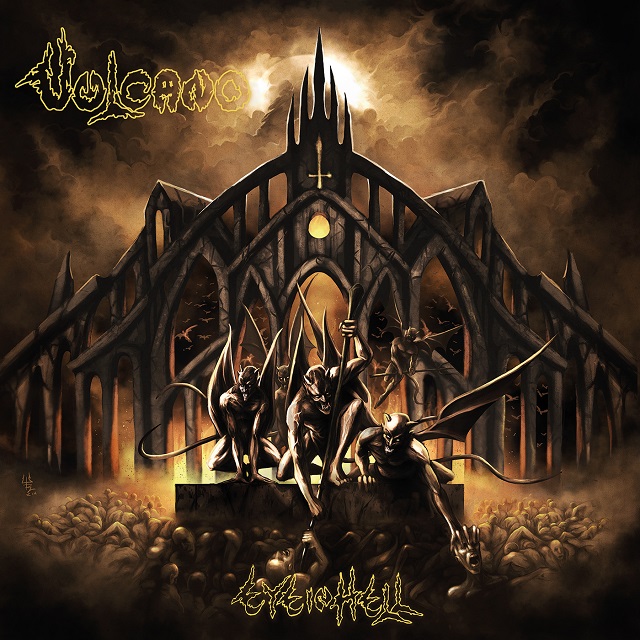 It seems to be the unfortunate natural order of things that when a lot of the early, legendary extreme bands put out an album today it’s overproduced, too long, and just generally no fun to listen to. Brazil’s Vulcano have actually been putting out a pretty consistent spree of albums that you probably haven’t heard, and Eye In Hell is the most recent; I’m happy to report they manage to sidestep at least some of the old-dog problems mentioned above on this one. The production is clean and modern, yes; part of what gave bands like Vulcano their charm back in the mid to late ’80s was the total trash-can production sound. Here, things sound about as raw as the new Possessed, which is to say this is alarmingly crisp and clean. That can work against bands like this pretty easily, but here the production is hitting the spot, allowing the band to shine without sounding too processed.

At 43 minutes, it’s not too long, although I would have been more excited at a concise 33 minutes. And is it fun to listen to? Sure, as tunes like the blasting “Evil Empire” and opening rager “Bride Of Satan” prove. I’m reminded of new-millenium Venom, who managed to leave their youthful tricks—crap production, crap playing—behind and come out strong as a whole new beast. Here, the beast is blackened thrash played with heft, Vulcano—consisting of one original member, of course, but what are ya gonna do?—here proving themselves totally worthy of playing side by side with the aforementioned Possessed in 2020, which is pretty victorious. And the chaos is still there: check out the manic and grinding “Sinister Road” or “When The Day Falls”, the thing’s barely held together at the seams, pure 2020 blackthrash doled out by some of the originators.