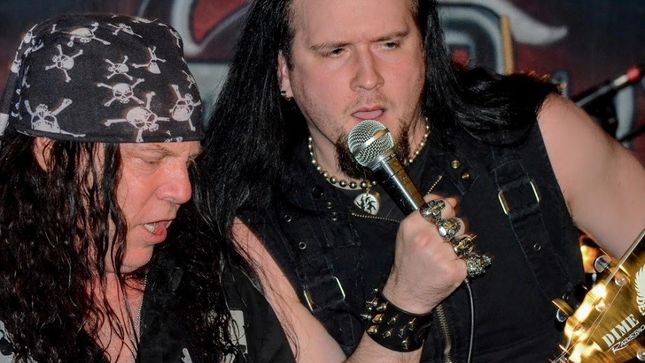 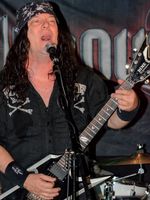 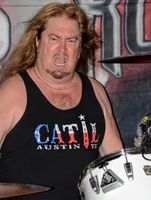 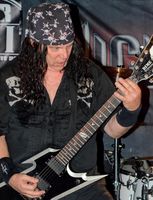 Eight months ago, as part of the initial leg in North America, celebrating their 40th anniversary, Geoff Thorpe, Larry Howe and the current incarnation of Vicious Rumors stopped by Bar XIII, in Wilmington, Delaware, the eastern and northern most point of that tour. Now concentrating on locales above the Mason Dixon Line, we were fortunate enough to have some overlap, hence a return to the scene of the crime. Yes!

Between Memorial Day and Labor Day, weekends on the East Coast are typically characterized by a mass exodus to the beach. Thus any club show is a dubious prospect, at best. Upon arrival, found the Vicious guys sitting around the bar, engaged in small talk with early arrivals and downing a beverage or two. Sights are set on completing the current run and getting down to the business of a new studio album. By the time it's available, it will have been four years since Concussion Protocol. "I just signed a two album deal," says Thorpe, as we toast the continued longevity, remaining with SPV. "(They've) been the lone constant, the last ten years," apart from himself. "We did 180 days of touring in the last year, which kind of got in the way," says the guitarist of recording plans. "We've been working on ideas for the last year and a half." Howe, the affable drummer, adds, "Unless we get a call saying 'So & so canceled, get your butt overseas', this will be the last (tour) for a while. We're in the home stretch... got to get home and sort out ideas for the new album." At 10:30, he confides, "I have no idea what we're playing tonight. Geoff will call 'em out. Do you have any requests?"

The band enters to an intro tape, all members with backs to the crowd, encircling Howe's drum kit. Lanky singer, American Idol veteran, Nick Courtney looks like a younger, leaner Schmier (Destruction), with an equally impressive collection of hardware, on his fingers. "Abandoned" opens, the energy hindered by the minuscule stage. Following up with "On The Edge" makes a potent 1-2 old school introduction. While not specifically touring in support of Digital Dictator, this time around, said disc still comprises a healthy portion of the setlist. "Worlds And Machines" sees Thorpe tackling backing vocals, as Gunnar DeGrey handles the guitar leads. Nice to see "World Church" back in the line-up, always an easy sing-along for the crowd. When it comes time for "Digital Dictator", Thorpe goes sick, on guitar. Courtney thrusts the mic into the guitarist's face, so Geoff can help out on the titular chorus. During "Minute To Kill" (more backing vocals, courtesy of Thorpe), the two guitarists meet center stage for a twin lead session. When completed, they fist bump and return to neutral corners.

"The last two were off Digital Dictator," explained Courtney, before continuing. "Last time here, we played the whole album. This one is also off that album." Cue "The Crest", which has Thorpe stepping forward, to showcase his fleet fingers, as Howe twirls his drumsticks. The guitar tandem both add their voices on this one. It ends with a Howe drum fill, seguing into "Six Stepsisters". Thorpe, semi-hunched, leaning forward as he grinds out this speedster. The concluding trio of songs has remained fairly consistent, although tonight there would be one addition, sandwiched between. "Down To The Temple" is a mid-tempo change of pace, punctuated by Howe's percussion. Both guitarists end up stage right. When not shouting out the title phrase (come the chorus) Thorpe pounds the edge of his asymmetric guitar, for emphasis. Paradoxically, it concludes with all guitars and bass raised UP, vertically. The fast, thrashy "Hellraiser" follows, with operatic (near falsetto) voice from Courtney. Once again, there's a twin lead exhibition, center stage, but when they depart, they trade leads: first a wickedly nasty display by Thorpe, then DuGrey. Geoff thanks the fans, then announces "Soldiers Of The Night". The two stringbenders on backing vocals, but the crowd also adds to the titular chorus. Before it ends, it breaks into three part vocal harmonies, minus any guitar, just Howe's drums. As a final send-off, Geoff asks the audience for "Five minutes of heavy metal, to last a lifetime", then launches into "Don't Wait For Me". As the clock passes 1AM, those who remain thrash about, seemingly wanting to create a mosh pit, yet still unfamiliar with the concept. Great night!

Children, can you hear it? Raise your hand if you want another dose of electric punishment! See you soon.