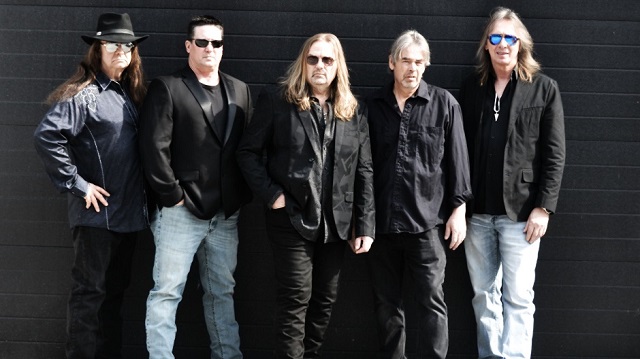 A major reason for the enormous success of REO Speedwagon was because of the guitar work of the late/great Gary Richrath. Case in point, his extraordinary and memorable solos in such classic tunes as “Keep On Loving You,” “Roll With The Changes,” and “Riding The Storm Out.” After exiting REO in 1989, Richrath eventually crossed paths with a group of musicians based in California, and wrote and demoed tunes with them. After the guitarist’s passing in 2015 (at the age of 65), many fans figured they would never hear any more new music recorded by Richrath. But now with the arrival of the group Richrath 3:13 and the album L.A. Is Mine, fans will get to hear the musical results of his collaboration with singer/guitarist Michael Jahnz. Jahnz recently spoke with BraveWords correspondent Greg Prato about Richrath 3:13, their music, and his sadly now-deceased friend.

BraveWords: How and when did you first meet Gary Richrath?

Michael Jahnz: “Well, it was a chance meeting in 1988 that changed my life forever. I was living in California after moving there with my band from the Midwest a couple years earlier. My drummer was at a convenience store when he ran right into Gary Richrath. Gary looked at him and his long hair and asked if he happened to be in a band, and of course he said yes. Gary proceeded to say we should jam together sometime, but none of us actually expected such a cool thing to happen. Sure enough though, Gary ended up coming over to our studio.”

BraveWords: How did Richrath Project 3:13 originally come together?

Michael Jahnz: “The record company that released our Richrath: Only the Strong Survive CD came to me with the idea of releasing a second CD containing some of the never before heard tracks that Gary and I had worked on during our time together as the Richrath Band. At that time, my band Project 3:13 agreed to add “Richrath” back on to the name and forge ahead with the concept of this new project.”

BraveWords: Story behind the band’s name?

Michael Jahnz: “This incarnation of the band is a continuation of the original Richrath Band and my solo project, Project 3:13. The ‘3:13’ was mine and Gary’s ‘thing’ from way back. It was the phenomena of continually seeing ‘3:13’ everywhere and also refers to all the nights staying in the studio until 3:13 am. I was actually a bass player when Gary and I met. After hearing my vocals, he decided he was going to make me his frontman and teach me to play guitar and proceeded to make me practice and go over and over and over things many times until 3:13 in the morning.”

BraveWords: Please discuss the new album, L.A. Is Mine.

Michael Jahnz: “This album is a perfect mix of songs. I’m so happy to be able to give Richrath fans something that they could’ve only dreamed of since his passing, and that is new Richrath music. There are three never before heard tunes that Gary wrote, we worked on together and we recorded demos of back in the early 90’s. My sound engineer was able to pull Gary’s actual guitar tracks off these demos and my current band played along with them in the studio. The results of which I’m so proud of. It really sounds like Gary is actually in the studio right there with us. Richrath fans will definitely notice the undeniable sound of Gary’s guitar. We also re-recorded two songs Gary had written for REO. Our versions of ‘Son of a Poor Man’ and ‘Ridin’ the Storm Out’ have gotten rave reviews so far. The rest of the album is rounded out with songs I have written throughout the years. My current guitar player Dennis Pockets came up with an awesome guitar riff that fit perfectly with my lyrics for ‘Heard It On The Radio,’ which resulted in a song that’s just dynamite. Perfect for driving in a fast car on a beautiful summer day. We’re excited for our fans to hear the great combination of tunes on this new album!”

BraveWords: What was the lyrical inspiration behind the song, “Help Me Save Me From Myself”?

Michael Jahnz: “Gary wrote this song and brought it to me during the many years we spent together. We worked on it on and off, but it didn’t make it on the Only the Strong Survive CD back then. All these years later, I pulled it out and dusted it off and found it to be appropriate for the times we’re living in today. Gary never really told me about the meaning behind the lyrics. One can only speculate on what Gary was saying with his powerful words, but I feel that with so many people in the world struggling with so many issues, it really hits home. We all have things we struggle with, demons, skeletons in the closet, being caught up in our own thoughts and emotions. I think this song speaks to everyone who is reaching out for help, and they just need to be held and loved.”

Michael Jahnz: “I love the fact that we were able to show the three generations of my family in the video. It shows hope and love. We were able to find some cool outdoor scenes to shoot in and around. The video starts off a little dark and angry but with the concept of asking for help and reaching out for someone, there is a light at the end of the tunnel. The shots of the band on the bleachers proved to be fun to shoot although there were a lot of takes! All in all, it was a great experience. We already have most of the next music video in the can. Can’t wait to reveal it to all our fans soon!”

BraveWords: I feel that Gary was a great guitarist yet underrated. What would you say were his best solos in REO?

Michael Jahnz: “My number one pick would have to be ‘Golden Country’.”

BraveWords: What are the future plans for Richrath Project 3:13?

Michael Jahnz: “Like I mentioned, we already have much of the next music video shot and we’re expecting the release to be soon. We also have several songs ready to go for the next Richrath Project 3:13 album, so look for that in the future. In the meantime, we plan on touring the country like crazy to perform for all our fans and to make many, many new ones!”

BraveWords: How would you like Gary to be remembered?

Michael Jahnz: “Gary was the nicest guy you’d ever want to meet. He was one of the best guitarists ever. He was private, but absolutely loved his fans and always took time for them. He was an amazing song writer. He was my mentor and my friend.”