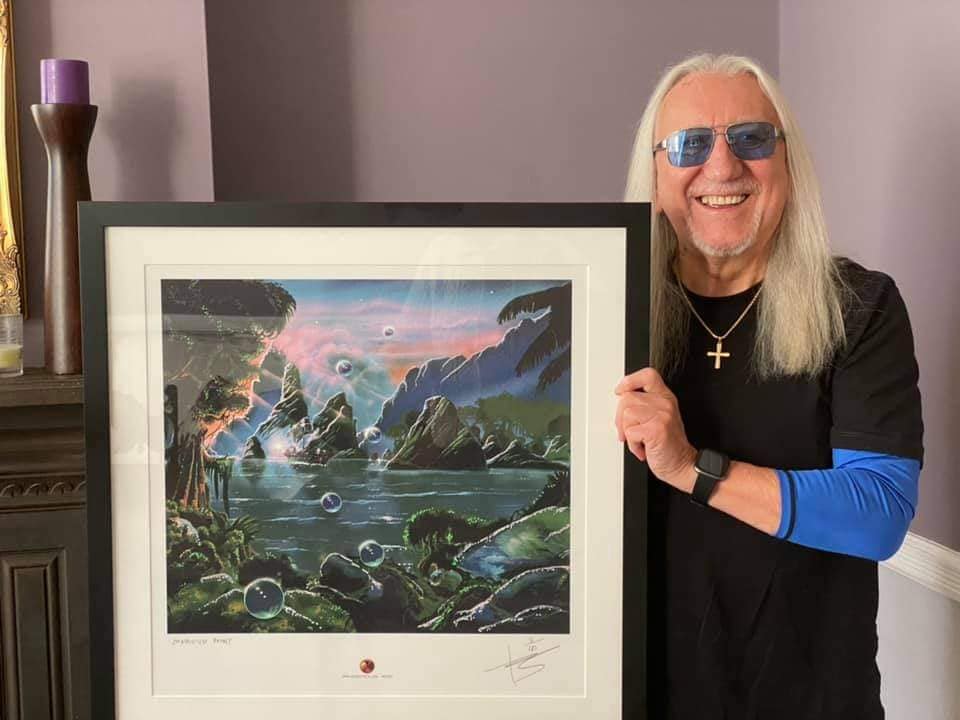 The late Trevor Bolder was the bass player in Ziggy Stardust And The Spiders From Mars, Wishbone Ash and Uriah Heep. His posthumous album, Sail The Rivers, has been completed by his friends and is fully endorsed by his family. The tracks are all new recordings of solo tracks and some songs that also became Uriah Heep songs. The album features guest appearances from his Uriah Heep bandmates Mick Box and Lee Kerslake and his Wishbone Ash bandmate Laurie Wisefield. The artwork was done by Ioannis, who created the cover art for some of the Uriah Heep albums Bolder played on. The album has been a passion project for everyone involved and is a fitting tribute to the memory of one of rock's greatest bass players.

BraveWords is giving away an Ioannis signed print of the album art (pictured above) of Bolder’s new record. The print is a very limited edition hand-retouched and hand-signed by Ioannis on archival paper with archival inks. It’s like owning a Ioannis original!

Trevor’s widow Shelly Bolder shared these personal comments about the album: “Trevor would have been so proud. It was his dream to produce a solo album which he spent endless hours working so very hard on. Sadly, he did not get to complete this dream. With the magic of friends and family we can all enjoy his beautiful music which can now live on forever. If Trevor were with us, I believe he would have dedicated this to Lee Kerslake who brought so much fun into all our lives.”

The lead vocals on the album are shared between Trevor Bolder and Derk Gallagher who added: “When I heard how far Trevor had got with the album, I knew it had to be finished. His vision for the songs was there, so much was laid out, it just needed his friends and family to help complete it. Trev was with us in every recording session in spirit and this album is part of his legacy.”

The album contains previously unheard titles and Trevor’s own interpretations of tracks he’d given to Uriah Heep to record.

Entering the contest is not simple! Not only do you have to sign up below to enter, if chosen you must answer this question:

What was the last track (not including bonus tracks) written by Trevor Bolder to appear on a new studio album by Uriah Heep?