IRON KINGDOM – We Come From The Land Of Ice And Snow 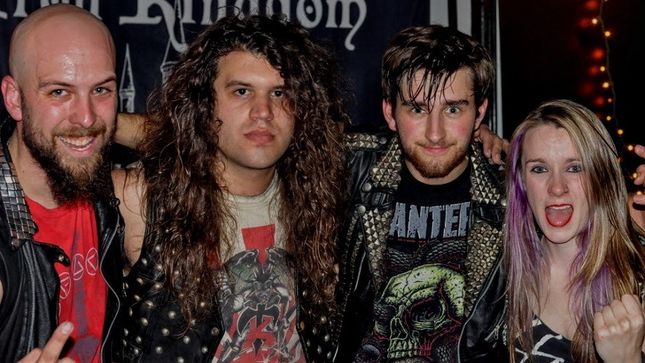 Couple of days ago, it was nearly 70 degrees (albeit unnatural, for fall), yet the western (BC) based Canucks blew into Philly with freezing temperatures and the first dusting of snow! Speedy, traditional metal, with a hint of Iron Maiden, will warm even the iciest heart. A glorified house party, the band set up on the floor, and a three inch drum riser (with borrowed kit). Most of the attendees were friends of the opening bands. No matter, Iron Kingdom were still all in, decked out in bullet belts, Tokyo Blade t-shirt, studs, spandex and cowboy boots (guitarist Megan Merrick). Almost a month into their American trek, they're out of 2x and 3x shirts (guess who has been coming to the shows?), but still quite a variety of patches, badges, pins and CDs.

"Road Warriors" (they truly are!) comes across as an early rager, the band constantly moving around, especially bassist Leighton Holmes, who lurks in the background, more often playing his four-string vertically, than horizontally. He pumps his first, shouts to the crowd and frequently switches sides of the "stage" with Merrick. She appears stymied, not having a real drum riser, from which to leap. While Chris Osterman (he of the red/black striped pants) also plays a mean guitar, he contributes higher pitched vocals. All three headbang, sometimes offer synchronized stage movements (swaying side-by-side, in duos, and occasionally, all together) and appear to be having a great time, plenty of energy. It resonates with the crowd. "Paragon" is one of the On The Hunt cuts, but nearly the entire disc is performed, interspersed with older favorites.

Chris Sonea gets an old fashion drum solo and coming out of the percussive showcase, it's a trio across the front of the "stage", headstocks aimed at the audience. "Sign Of The Gods" is a tasty slice of speed metal. "At Home In The Dark" lays down a blazing guitar pattern. Twin leads begun "White Wolf" adopts a galloping, Maiden riffage, all three stringed instrumentalists adding vocals, come the titular chorus.

No encore tonight, even for a mercifully early, mid-week club show. About the only disappointment in an otherwise stellar evening. Iron Kingdom already has some overseas festival appearances lined up for 2020. Here's hoping it ain't too long before they commence another trans-continental run, here at home!