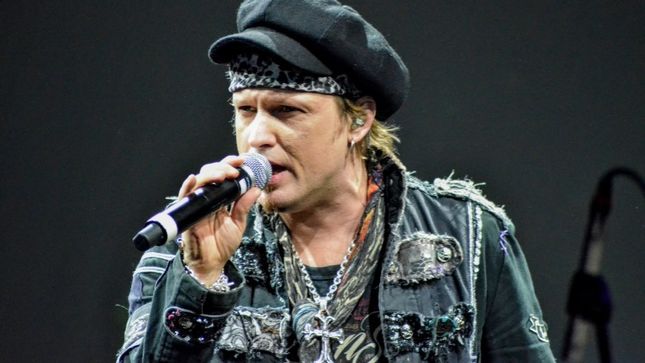 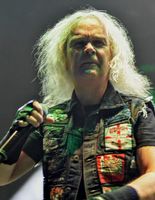 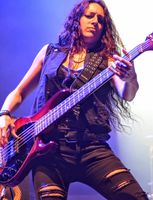 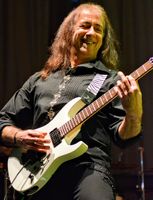 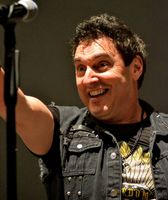 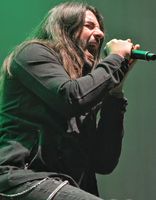 This marked the ninth time traveling to Germany, in December; post-birthday, pre-holidays, to celebrate with friends and see/hear some metal music. The one day Knockout Festival is sort of a personal reward, a year end Alvin gift ("It's a present, from me to me," the mischievous Chipmunk said, on a Xmas single, more than half a century ago). Even with all the overseas festivals, at least half of the 2019 line-up was comprised of bands not yet witnessed. The wooden floored Schwarzwaldhalle (Black Forest Hall) was once again sold out: a plush setting for rock, typically housing orchestral performances and/or Broadway style theater. One set of mobile bleachers (for those that prepaid) is the only seating, in the main room, a large dining area (well away from the music), also has chairs. New this year was a digital beer station (only in Germany!). A technical marvel linked to your credit card and/or mobile phone, it dispenses a cup, then a tube fills the glass (slowly retracting, as the liquid rises, as to not produce foam), all behind a protective, Plexiglas screen. What will they think of next? Even the seemingly safe employment of a Deutsche beer vendor is now in jeopardy!

Doors open at 3:30, but the first act didn't hit the stage until 5 PM. That honor went to The Unity, the band formed by Henjo Richter (guitar) and Michael Ehré (drums) while Gamma Ray are relatively inactive, what with mainman Kai Hansen's return to Helloween. Not sure the last time these guys played live, as they were hampered by technical issues, early on. By the end of prophetically entitled "Last Betrayal", Gianba Manenti had scraped his in-ear monitor, the singer fidgeting with it throughout the opening number. Richter was alone, stage right, while six-string partner Stef E struggled with his instrument cutting out, intermittently, during "No Hero", bathed in green/blue, with streaks of yellow. Chugging, orange lit "No More Lies" adopted a grittier, mid-tempo, hard rock sound, as opposed to its power metal surrounding. The Ray's "Send Me A Sign" got a big response, before ending their 30 minutes onstage with one of their own compositions.

Despite Johnny Gioeli fronting Axel Rudi Pell for close to 20 years, had never seen, let alone had the opportunity, to check out the early ‘90s American band that started it all, for him and his brother, Hardline. The singer remains the only original member, but there's been numerous renowned players (Schon, Sarzo, Castronovo, Rock, Tafolla, Terrana, etc.) who have been on record, or performed live, as part of Hardline, especially in the grunge era, when radio friendly hard rock anthems scattered hair metal heaven to the winds. A single guitar quintet, Gioeli is the star of the show, providing comic relief as he gallops from one end of the stage to the other, karate kicks alongside bassist Anna Portalupi, even laying, belly down, hanging into the photo pit, on "Takin' Me Down". If his vocals weren't so killer, it might be distracting. Couple of times, he mentioned "glad to be home in Germany." A red lit "Life's A Bitch" got the crowd to sing the titular chorus, with the thumping bass prominent in the mix. For much of the show, keyboardist Alessandro Del Vecchio (done some work w/ Mat Sinner) kept his foot atop one of the wedge monitors that surround his rack of keys. He was spotlighted, to begin the extended "Hands Of Time". Have to believe that the guys in patch-adorned battle jackets/vests had a hard time with the ballad. The big hooks of "Hot Cherie" (their big claim to fame) gets back to Sunset Strip/MTV glory. Red, with chartreuse lights, "Fever Dreams" sees the audience clap along to the keyboard notes. Have to say, 40 minutes was probably too short for Hardline, especially with lengthy intro (why not start playing it BEFORE you're set to take the stage? Even the promoter agreed!) and the aforementioned slow one. Maybe next time... 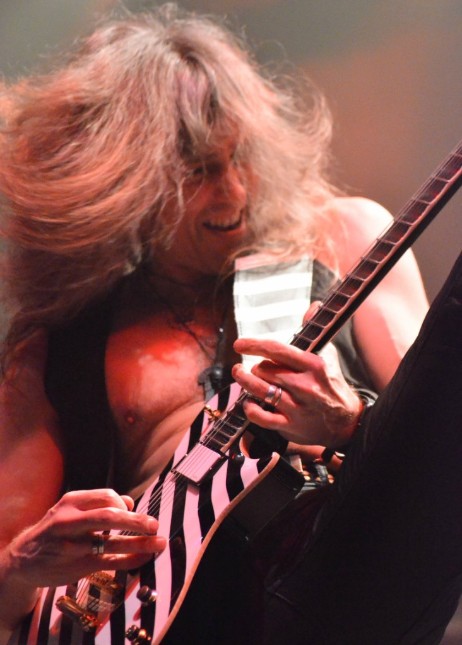 Odd, seeing a venerable Teutonic institution like Grave Digger, so low on the totem pole, but politics aside, it's always a fun time. In Axel Ritt, mainman Chris Boltendahl finally has someone who can help carry the show. On the opposite side of the stage is longtime bassist Jens Becker, nailing down the bottom end. That leaves plenty of space for the gregarious, silver haired frontman (outfitted with fingerless gloves and patched battle vest) to roam the stage, exhort the crowd (and occasional deride their lack of effort, even if all his stage raps were in his native tongue) and generally have a good time. A blistering "Healed By Metal" got things started, Ritt splay legged, getting ever closer to the ground. Must be a flexible limbo player, as more than once he was on his knees, back flat against the stage, still riffing away! His black and white striped canvas high top sneakers (custom Chuck Taylor's?) match the paint job on his guitar. "The Clans Will Rise Again" sees Boltendahl maniacally stalking the stage, side-to-side. A yellow/green hued "Highland Farewell" has the poseable action figure of a guitarist again contorted in unnatural angles, at the stage edge. Situated at the far reaches of the stage, Boltendahl air guitars to "The Dark Of The Sun", as four plumes of fog erupt. The crowd adds their collective voice, to the chorus. Another explosion of smoky mushroom clouds greets the song's conclusion. The vocalist introduces the red-lit staple "Excalibur" by only the first two syllable, the crowd completing the chant. Pronounced Ex-Cali-Bore. Ritt's gritty tone makes this clickety-clack German metal at its finest. A dozen spots train on the guitarist, during his solo, as Ritt wails away, headstock pointed to the sky. Double bass drumming propels "Ballad Of A Hangman", while the staccato picking, to an otherwise a cappella start to "Rebellion", features more crowd singing. Closing, as always, with ‘80s classic, "Heavy Metal Breakdown". Sure the lyrics are ridiculously simple, but for a foreign language (English) to be universally accepted, it must be so. Crowds don't sing along to Dream Theater! Once more, Ritt demonstrates his Spiderman-like plasticity. During the final crescendo, the guitarist is atop the drum riser, playing backwards, behind his head as the last cloudy eruptions signal the end of the set.

As long as I can remember Axxis frontman Bernhard Weiss (the lone original left) has served as master of ceremonies at Knockout, introducing each act. True again tonight, even with his band on the bill. They last graced this Karlsruhe event back in '15, albeit not at such a lofty position in the running order (guess all that MC work has added benefits!). Tonight, Chris Boltendahl called Axxis to the stage, a band celebrating 30 years since their debut. After cursory examination, during which Weiss demoed his sped up, hurky-jerky, side-to-side thrashing "dance" move, our group headed to grab some long overdue food. Onsite, the choices were BBQ and the omnipresent pizza. A small, almost flatbread crust pie, with slices of salami was 7.50 Euros and half a liter of hefeweizen (wheat beer) was 4.50 Euros, plus an additional two, for deposit on the cup/mug (repaid when you return the vessel). Prices are not excessive, especially for a live concert, at least by USA comparisons. Snuck back in the hall, late in Axxis' set. It was still packed and those in attendance were singing along, seemingly a success, for all involved. 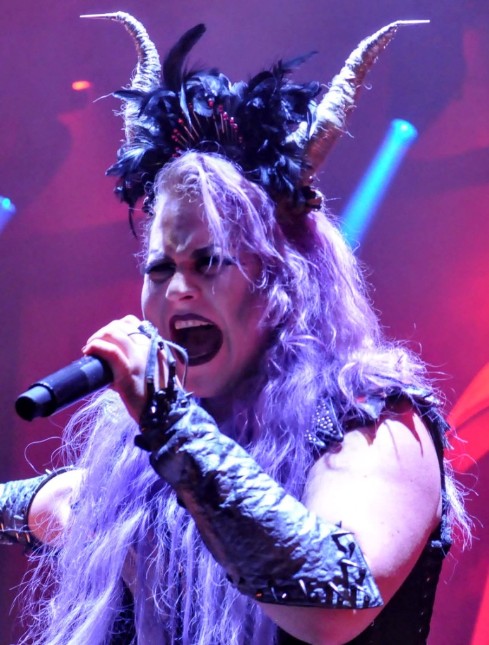 Battle Beast frontwoman Noora Louhimo is a visual spectacle (with her twin horn headdress) and as such, attracts most of the photographers' attention. Unlike previous visits, noticed she made early efforts (the initial trio of songs, when cameras are still in the pit) to include her bandmates in the activities, frequently being seen alongside them. Alone, she punched, kicked and did a solo aerobic routine, all while extolling the crowd. Her trilling voice highlights the pomp of tunes like the opening "Unbroken" and "Straight To The Heart". After a few volatile numbers, they dialed it back with "Black Ninja", but not devoid of exploding plumes of smoke. A mix of Eurovision song contest and Survivor, it was aqua searchlights for "The Golden Horde". As Louhimo did an impromptu disco/dance routine, twin leads took center stage. Although employing the most Finnish of all instruments, the keytar, that wasn't enough. After announcing gin & tonics all around and the band having a drink, in masse, they unveiled a bizarre, wheeled contraption that had keyboards (one guy pushed it around in circles, as the keyboardist vainly attempted to keep pace, without getting dizzy) and four toms that light up in different colors, when struck! Louhimo even made a costume change, ditching the Valkyrie digs, and shorts, for a shimmering blue lame top/jacket, for pink lit Survivor sounding "The Hero". Later, the guitarist did push-ups, while the song continued (cue visions of Rocky..."Eye Of The Tiger"). When the singer asked, "Do we have any Vikings in the hall," the band launched into a snippet of Amon Amarth's "The Pursuit Of Vikings", nice touch! It was actually an intro to their "Bastard Son Of Odin", icy blue lights aimed at the crowd. Over-the-top, all the way! 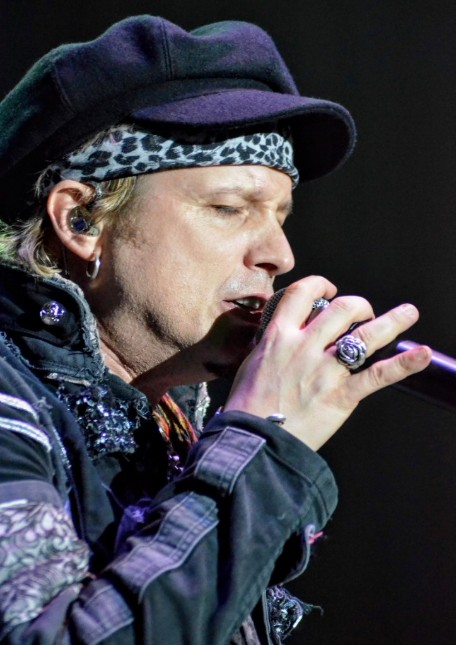 Was a fan of the original, two-part The Metal Opera concept by Avantasia, the project of Edguy singer Tobias Sammet. Over time, it has become less traditional/power metal and more prog rock. That said, it is enormously successful (with a revolving cavalcade of participants, both onstage and in the studio), but am I the only one yearning for a (last?) loose, fun loving Edguy effort? Guess Eggi & Co. would agree, but I digress. With a trio of backing singers (two female, one male) onstage throughout the two hour performance, a series of established artists make guest slots, singing in conjunction with Sammet, one another and/or as the stand alone voice. His band includes guitarist/producer Sascha Paeth, who not only helped Sammet in the studio, but once had his own outfit, Heaven’s Gate. This marks the third time I've seen the band, in the last six months, so an early exit was almost guaranteed, on my part. After handling the opening "Ghost In The Moon" by himself, Tobi referenced the absence of Ronnie Atkins (Pretty Maids, battling cancer). Instead, Herbie Langhans, a regular member of the back-ups, was chosen to sing "Book Of Shallows" (which Ronnie typically handles) squaring off against Adrienne Cowan, the black-haired fem-metaller. Up early and returning often, longtime Norwegian collaborator Jorn Lande gets the most time onstage, as Sammet sat on one of the twin staircases, which lead up to a gated riser, who then fetches himself a drink ("which is not gluhwein"). The two would join forces for the rather rocking "Scarecrow". The stage looks designed by Tim Burton, circa Nightmare Before Christmas.

Geoff Tate (ex-Queensryche), who brought his Operation Mindcrime to Knockout, back in '15, is part of the current Avantasia extravaganza. Throughout the show, a video backdrop displayed the various album artworks. Incidentally, the artist was in the dining area, with an exhibit, selling prints of his handiwork. An old school follow spot, operated by a single person, focused a beam of light, from the back of the hall, when necessary. "Promised Land", a solo showcase for Mr. Big singer Eric Martin, who earlier took on "Dying For An Angel", with the trio of backing singers relocating, now spread out atop the wrought iron gated riser. He's also handled the kitschy cover of "Maniac" (from the Flashdance movie), while Magnum frontman Bob Catley generally opts for the slower/ballad material. Wasn't around for the "Sign Of The Cross/Seven Angels" grand finale, which sees all the actors onstage at the same time, which is quite a visual. Avantasia will perform select 20th anniversary gigs, next summer. In the meantime, maybe Tobias will reconnect with the Edguy guys? A man can hope, right?