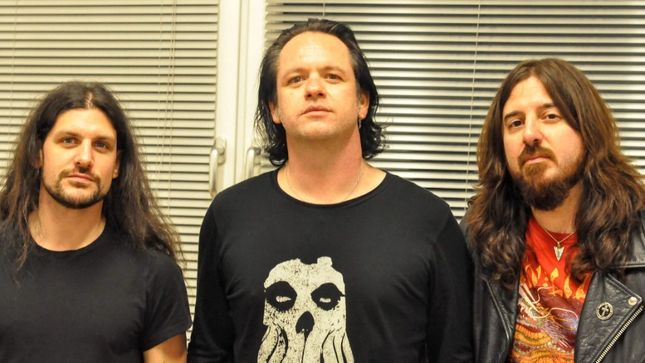 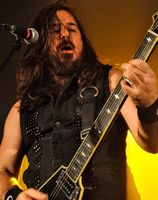 With their skeletal mascot "Rocky", onstage and adorning merch, the Ventura, California based trio fit perfectly into the Friday the 13th motif. A little club, in Karlsruhe, Germany, built on the sight of the town's former slaughterhouse, is even more apt! The next-to-last night of an extensive European run, with Sacred Reich, original plans called for the band perform not one, but two shows, including a free, impromptu gig, across the street from Substage, in a neighborhood bar, but letting the Reich guys borrow the Demon equipment (for the entire tour!) put the ca-bosh on any such plans. A noticeable dip in attendance, once Night Demon left the stage, there were plenty of people hanging with the boys afterwards, gobbling up merch, getting autographs and/or selfies, as well as talking with their (in many cases, newly discovered) heroes.

Hall is packed when the trio take the stage, kicking off with a high octane "Ritual", accented by a thick layer of fog. Jarvis Leatherby (bass/vocal) and Armand John Anthony crisscross the stage, but always make it back to the microphone on cue. Occasionally they visit Dusty Squires, atop his drum riser, overseeing all. "Full Speed Ahead" is as advertised, the lighting guy finally discovering the whites. Leatherby never stops headbanging. If Megadeth didn't already have a Vic Rattlehead, this bassist certainly lives up to the name. A few bars of Motörhead’s “Overkill", complete with opening double bass drum barrage, segues into "Dawn Rider". Upon its completion, the stage goes black and the pre-recorded intro to "The Howling Man" gives the guys a brief respite, a chance to catch their breath and/or a quick drink, following the insane pace unleashed. The taped storm was all the more appropriate on this rainy night.

Strobes break the red/yellow illumination of "Heavy Metal Heat", with the lyrics, "Friday night, Get your tickets to the show..." Life imitates art, with the crowd offering the titular chorus. Under green lights (Go!), Squires looks like his jogging-in-place, arms skyward, alternating the strike of the toms, as he launches into the mid-tempo "Curse Of The Damned". It becomes a beer hall sing-along, complete with "oh, oh" chorus. When finished, Jarvis stands there, in appreciation of the audience's effort. Then they repeatedly chant the band’s name. "Screams In The Night" shifts back into overdrive. Red lights greet "The Chalice", with an abbreviated version of the recorded intro. The band's skeletal mascot makes his appearance on this one, complete with said drinking vessel. The slower (ballad?) "Darkness Remains" (just the second song aired from their most recent studio effort, which also bears that title) closes the proper set. Several converts film the song on their cellphones, eager to capture a keepsake moment.

The lights go out onstage and it threatens to be the end, but you can't end this high energy evening on such an atypical note. Night Demon charge back on for their signature tunes, as an encore/finale, under copper lights and white strobes. The band plan to spend the first quarter of 2020 in the studio. A short string of US gigs pick back up after the Philly Beer & Metal fest (Jarvis promises a new single will be available at the April 3rd & 4th weekend, as well as their own brew!). Beware the Night Demon.