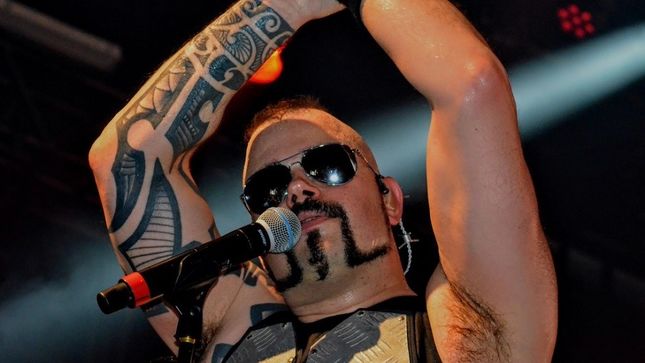 Black shirted hordes and internationally elite runners overtook the Big Apple the first weekend of November. Luckily, the two clans never intermingle, the metalheads raging until all hours of Sunday morning, before retiring, just as the marathoners warmed up for their 9 AM start. Needless to say, I was amongst the crowd at Playstation Theater (just off Times Square). Reportedly, this was the final metal show at the underground venue (previously known as either the Best Buy, or Nokia Theater), the prime real estate having been sold and it will cease operations by the end of the year. One less home for touring bands in the city. At 3 PM, a couple dozen kids are already in line as the HammerFall tour bus pulls, up, trailer in tow. Just minutes before a trio of Sabaton members waltz down 44th Street, unnoticed, in street clothes, until I stop them for a quick hello: Hannes, Chris and the Mohawk singer, incognito beneath a baseball cap. It all happens so quickly, fans are unable (or unwilling) to get out of line for a photo, autograph and/or present their heroes with gifts: two patches for Joakim, and wrestling, superhero trinkets for HammerFall guitarist Oscar Dronjak. To accommodate the sold out crowd, doors opened 30 minutes ahead of posted times, allowing the fans to scoop up $40/$50 t-shirts.

Relying heavily on the last few albums, and apart from the requisite "Ghost Division" kickoff, the so-called Sabaton classics are left to the encore. The Great War is one of the year's best releases, and as such, the Swedes perform four cuts off it (as well as "In Flanders Field", as a pre-recorded intro). Keeping with the WWI motif, "The Price Of A Mile" (concerning the bloody stalemate at Passchendaele) is resurrected, but no "Cliffs Of Gallipoli". When the lights go dark, there's a backdrop of digital flames, old news reels of soldiers marching off to war, newspaper headlines and biplane dogfights, until Hannes van Dahl mounts the drum kit (perched atop a twin barrel tank). Given this city's history (9/11 attack), the crowd was ravenously vocal for the ideas WWI manifested. Met with cheers, Joakim Brodén announces, "We are Sabaton and this is 'Ghost Division'," as the ubiquitous opener sees the band charge onstage, accompanied by video of a WWII era tank crawling across the screen. Bearded co-founder Pär Sundström, in uniform, looks like he stepped right out of early 1900s black & white war photos, as he lifts his bass overhead. When not racing from one end of the purple hued stage to the other, Brodén karate kicks, maniacally pumps his fist and takes part in all sorts of calisthenics. He merely needs to point the mic towards the fans, who add their voices to the well-loved tune. Same for the newest title track, the titular chorus phrasing of "The Great War" tailor made for audience participation, as the armor breast plated singer acts as part cheerleader, part orchestra conductor, under yellow lights. Rather than mere air guitar, the singer straps on an ESP, with camouflaged paint job, for "Resist And Bite". 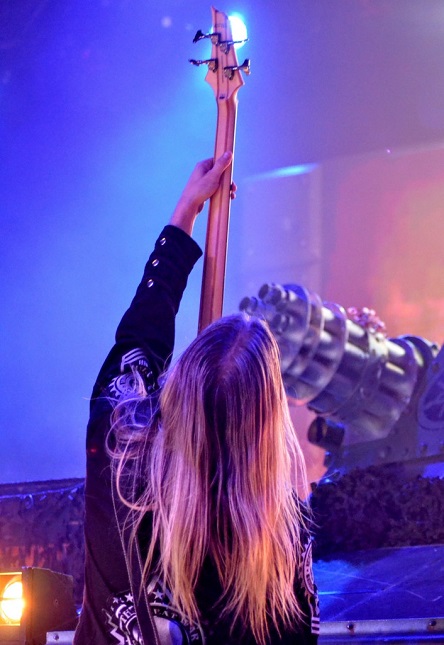 As they'll do throughout the night, green/yellow lit "Fields Of Verdun" sees Sundström and newboy/guitarist Tommy Johansson add backing vocals. Bouncy "Red Baron" (cloudy skies onscreen) is appropriately lit, as the crowd sings it entirely. Strange to hear a mournful song, about the Passchendaele tragedy, in such an energetic, fun concert setting, but somehow Sabaton (and their respectful fans) pull it off. Lots of punching the air, fists overhead, by both Brodén and the fans, during mid-tempo "Bismarck". After a short taped intermezzo, the pace enlivens again, for red-tinged "The Lion From The North". Center stage, Brodén stands feet widely splayed, as the video screen blazes digital flames. Heraldry and flags flash onscreen for "Carolus Rex", as Sundström rests his bass, vertically, on his thigh. Another good time, infectious tune, "Shiroyama" (lyric video onscreen behind the band) leads into aggressive "Night Witches" (about female Russian pilots in WWII). Bathed in red, warning sirens herald its arrival, with more video of cartoon bi-planes and bombs. The band likes to play tricks on one another, throughout the set, be it Joahnsson and Brodén trading kicks to the butt, or the singer fingering Chris Rörland's fretboard. The band leaves the stage, then taped narration (courtesy of Iced Earth's Jon Schaffer), aka "Diary Of An Unknown Soldier" introduces the last section of the proper set: "The Lost Battalion", "The Last Stand" and "82nd All The Way", the latter a rousing crowd favorite, already. 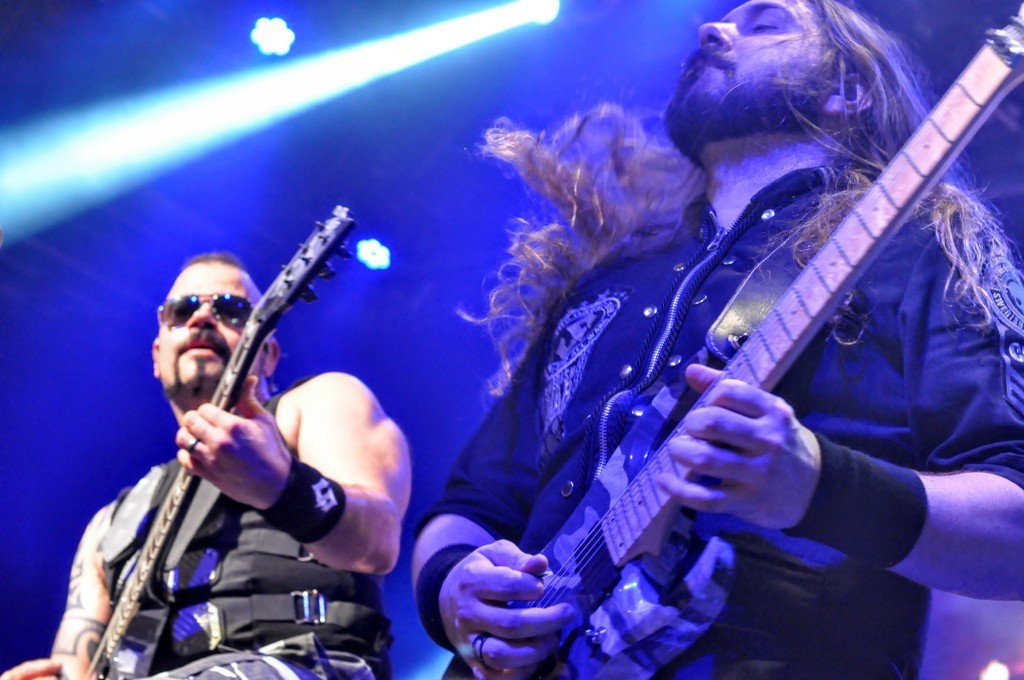 For the encore, "Primo Victoria" finds nearly everyone, band and fans alike, pogoing in place. By now, it's a well-known onstage antic, the singer's disdain for "Swedish Pagans", so when Johansson begins the telltale, sing-song rhythm, Brodén stands center stage with a stunned look on his face. The crowd picks up the challenges, clapping along to an a cappella rendition of the guitar harmonies. Brodén doesn't say anything in protest, but the towering guitarist comes over and playfully gives the sunglasses wearing frontman a hug. Before they go, the singer makes sure to acknowledge this occasion, saying, "We'll miss playing here, but should be able to find somewhere else." As usual, Brodén removes his shades for the finale, tonight, "To Hell And Back", witnessing a return of the pogo maneuver. Enjoyable evening, from one of the big, Next Generation outfits. Hurry back! 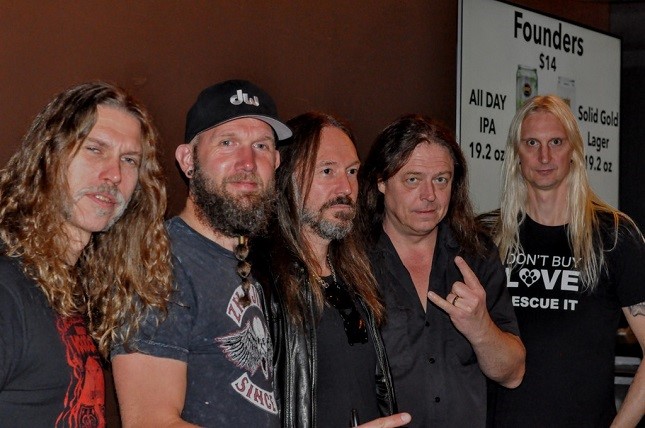 Opening the evening were countrymen HammerFall, led by lanky, Bud Lite loving, blond guitarist Oscar Dronjak and jovial singer Joacim Cans. Ominous intro music, the stage red, as band enters to "Never Forgive, Never Forget", plumes of smoke erupt at opposite ends of the stage. Four white searchlights sweep the stage. Midway through heads down "Renegade", the stage has been flipped, Oscar alone, stage right, as the tandem of Pontus Norgren (guitar) and Fredrik Larsson (bass) join the singer, on the left. Synchronized stage moves too. For "Blood Bound", Cans tells those assembled, "If this is the first time you've seen HammerFall, just sing anything." Lots of headbanging, or hair shaking, side-to-side, for yellow lit "Hector's Hymn", as it's four across the yellow lit stage. Pontus and Oscar offer backing vocals, come the chorus. "Let The Hammer Fall" is the lone inclusion from the momentous pair of initial recordings. Hopefully the headlining tour (a year from now, when Dominion will be less of a priority) will feature a few more "oldies." Purple lit "Hammer High" begins with all the guys singing the chorus, a cappella. They each stand with fist aloft, except Dronjak, who has his Thor's Hammer shaped guitar overhead. Pontus opts for a cream colored Strat (seems to the axe of choice for Swedes!). Later, Cans jokes that the merch table is selling underwear with his picture on it. Ode to the biggest metal festival in their homeland, "(We Make) Sweden Rock" and speedy "Hearts On Fire" round out a quick moving eleven song set. Entertaining, traditional metal, HammerFall always satisfy.