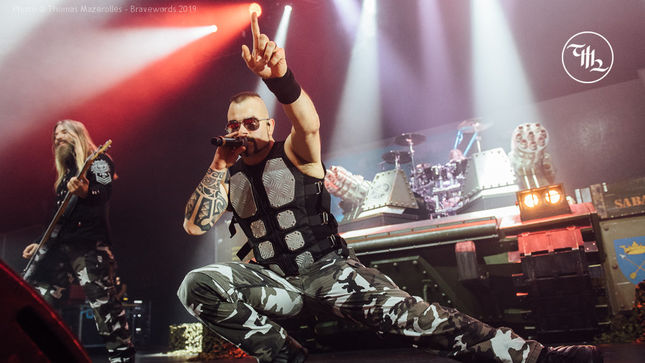 Sabaton is definitely one band that the fans in Montreal can’t seem to get enough of. Their crowd gets bigger at every concert, and it is not a surprise that their show with HammerFall at the MTelus is sold out.

Armed with a new album called Dominion, HammerFall starts this Swedish night with the songs “Never Forgive, Never Forget” and “One Against The World”, both from their recent album. We can easily see that the crowd is not there to see these Swedes tonight, but some fans are having a blast headbanging to the rhythm of their music. The musicians are very dynamic on stage, but they seem a little tired as this show is near the end of the tour. That does not impair the powerful voice of Joacim Cans and that does not stop him from interacting with the fans throughout their set. The crowd is more demonstrative when the band play their classic hits like “Renegade”, “Blood Bound” and “Any Means Necessary”. Considering how many times the band played in Montreal, it is very surprising to see that most fans were seeing them for the very first time. But the crowd got more involved as the band played and they sang the chorus of the songs “Hector's Hymn”, “Last Man Standing”, “Let The Hammer Fall” and “Hammer High”. Oscar Dronjak changed guitars a few times and the fans really liked his iconic hammer-shaped guitar. The band ended their set with the very melodic “(We Make) Sweden Rock”, a third song from their most recent album before playing “Hearts On Fire”, one of their biggest hits. By this time, every fan’s lungs were on fire as they were all singing loudly with Joacim. Even if the crowd was not on their side, the band gave everything they had on won many new fans with their catchy melodies.

Sabaton fans are in for a treat tonight as their show includes their tank drum riser named Audie as well as pyrotechnics, a first at the MTelus and a first on this North American tour. Fans yell the band’s name in order to get them on stage faster so it is only natural to see them go crazy when they hear the introduction to the song “Ghost Division”. After getting the attention of the fans with this old song, the band plays a series of new songs that included “Great War”, “Fields Of Verdun”, “The Attack Of The Dead Men” and “The Red Baron”. Even if there is a giant screen at the back of the stage that showed images related to each song as well as lyrics of newer songs, the fans can hardly see anything because it is hidden by the gigantic tank. As usual, Joakim Brodén interacts with the crowd constantly and takes special care of the young fans that are having the time of their lives, he even gave his sunglasses to one of them in the front row. Fans gave them a royal treatment as they screamed in between most of the songs and Joakim could barely talk, he simply said thank you as he savoured the moment. He later mentioned that this crowd was the best one of the whole tour. A funny moment happened during the song “Bismark” as a large portion of the crowd sat and paddled during that song, a thing that had only been seen during the shows of Amon Amarth. The succession of “The Lion Of The North” and “Carolus Rex” got the fans on fire and many crowd surfed or pushed each other with passion. With the crowd inching their way towards craziness, you could see the musicians savouring this moment and having a big smile as they played. The band came back for the encore with the classics “Primo Victoria”, “Swedish Pagan” and “To Hell And Back” and the fans still had enough energy to sing those along with Joakim.

Looking at the reaction of the musicians, it is easy to say that they really enjoyed their show in Montreal. It might also be the last time we see Sabaton in a small venue as they seem to have outgrown the MTelus. That being said, fans will have a blast at their show, no matter where they play.