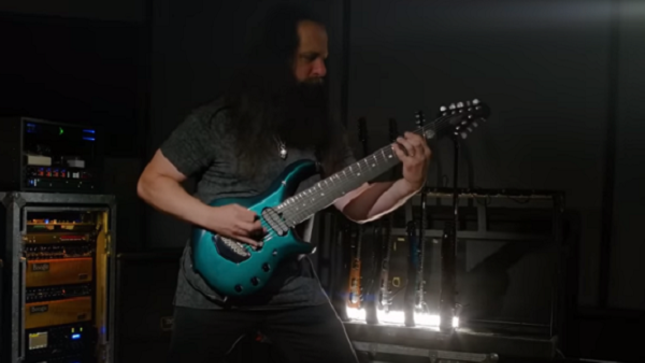 Guitar World caught up with Dream Theater's John Petrucci to discuss the band's new album, A View From The Top Of The World. Following is an excerpt from the in-depth interview.

Guitar World: "The Alien" is fast paced and has a lot of super-charged riffs, but also there are some beautiful moments of David Gilmour-esque lead lines. You like that contrast, don’t you?

Petrucci: "Sure. I love mixing the two approaches. You know, the guitar is such a beautiful and expressive instrument. It allows you to be the melody cat in so many ways. When you solo, you’re the vocalist in the band for those moments. In that way, I’ve always been influenced by guys like David Gilmour, Neal Schon and Gary Moore. They’re phenomenal at that kind of thing.  You hear it on the album.

If a song is really energetic and has a lot of riffs, I put in the contrast of a beautiful melodic section. That side comes out in 'The Alien' and 'Awaken the Master'. That juxtaposition has always been very important to me.

I’ll give you my own analogy: If we were in a speedboat going full bore for a while, sometimes it’s nice to slow down and just admire the water. We would look at the scenery, the mountains; we’d just take a moment to breathe. That’s what those melody sections do. I love how the guitar allows you to experience those contrasts."

Guitar World: "Sleeping Giant" has an extended solo section in which you and Jordan (Rudess / keyboards) really go at it. You shift moods and sounds, and there’s even a part where he plays a wild honky-tonk piano solo. How do you guys work that out? Do you reject as many ideas as you keep?

Petrucci: "A lot of it is improvisation. I think what we do is allow each other to shine. We love trading solos and playing unison lines, and we have fun trying new things sonically. The great thing about our style of music is, we have the freedom to do that to the fullest extent. We’re not confined by song length or stylistic preconceptions. We shred and solo and improvise.

We can kind of do whatever we want. It’s very stream-of-consciousness, but it’s also very mapped out. A lot of times, it’s like, 'You take the first solo. Then I’ll come in, and then you’ll come back. Then at the end, we’ll do a unison thing.' It’s great. Everybody gets involved and has a chance to shine. We do that with all the instruments: 'Mike, this is your part. You go for it. This is going to be a great drum moment.' It’s really just having fun with the music.”

Dream Theater have revealed the worldwide chart positions for their new album, A View From The Top Of The World, released on October 22nd.

"Thank you DT fans around the world for your amazing support of our latest album A View From The Top Of The World! It means a great deal to us." 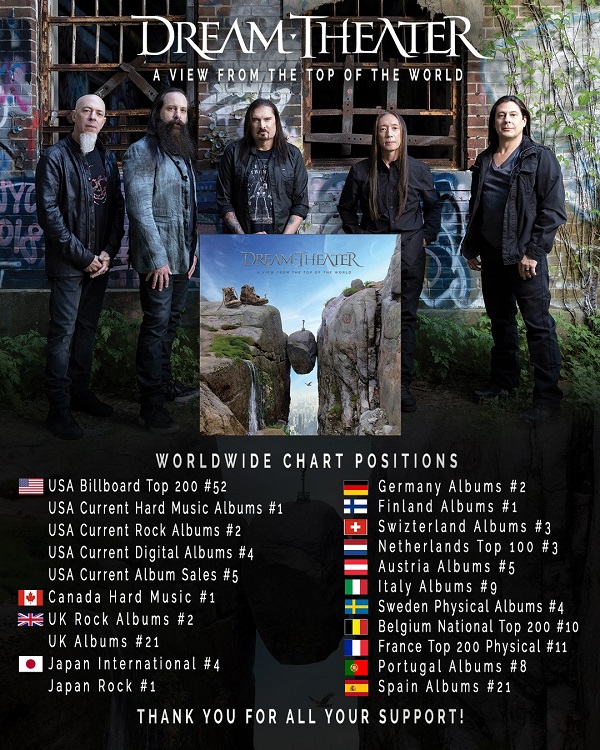 With the recent release of the band’s 15th studio album, Dream Theater have released another music video from A View From The Top Of The World. The video for “Awaken The Master” is a frenetic, high-definition CGI marvel from long-time collaborator Wayne Joyner.

Continuing to challenge themselves as musicians, “Awaken The Master” marks the first recorded use of an eight-string guitar by John Petrucci. The track was the last one recorded for the album and clocks in at an impressive 9:47 - making it the third longest song on A View From The Top Of The World. The video for “Awaken The Master” can be seen below.

“It’s the last song we wrote. It’s also the first time I’ve used my eight-string guitar, which was fun for me. Back in the day when we were writing Awake, I’d always wanted to play a seven-string. So, I ordered myself one. I wanted to be inspired again by the instrument without any pre-conception. I used it, and I wrote in my style on the eight-string. It was actually a prototype! ‘Awaken The Master’ purposefully starts with guitar only. John Myung wrote the lyrics. Recently, I heard him say, ‘The master was your heart’. He was referring to awakening your heart. It’s one of the heavier songs on the record due to the range of the instrument,” explains John Petrucci.

A View From The Top Of The World is now available everywhere music is sold and streamed and is also available for order here.