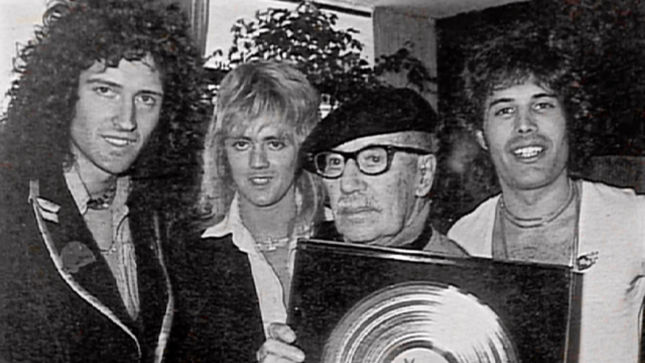 In the video below, Queen drummer Roger Taylor talks about how the band’s legendary album A Night At The Opera got it’s name, and recalls “performing” the album track “’39” for legendary American comedian and film/television star, Groucho Marx:

In the footage below, Queen guitarist Brian May performs a 12-string acoustic version of “’39” in the studio. The clip is taken from the A Night At The Opera 30th Anniversary DVD.

Queen’s A Night At The Odeon, Live At Hammersmith ’75, is out now on CD (Hollywood Records), and DVD & Blu-Ray (Eagle Rock Entertainment). This show was a culmination of the 26-date Queen Invite You To A Night At The Opera UK tour and the first tour that they had ever performed “Bohemian Rhapsody” on.

The CD, DVD & Blu-Ray package features the band’s full live show, complete with a never heard before ‘second encore’ of “Seven Seas Of Rhye” and “See What A Fool I've Been”. The DVD and SD Blu-Ray versions also contain two special bonus features – Looking Back At The Odeon, a brand new 22-minute documentary featuring a previously unseen interview with Brian May and Roger Taylor by Old Grey Whistle Test presenter Bob Harris about the 1975 Hammersmith Odeon show, plus the rarely seen Live At The Budokan – Japan 1975 footage, featuring three songs (“Now I'm Here”, “Killer Queen” and “In The Lap Of The Gods… Revisited”) recorded during their legendary tour of the Far East.

DVD and SD Blu-ray formats do not include “Seven Seas Of Rhye” or “See What A Fool I've Been”.