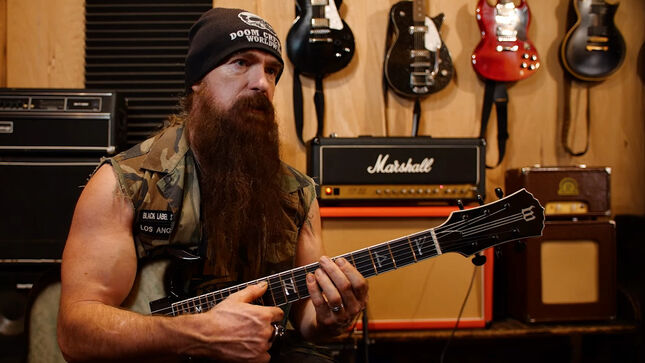 Speaking with Metal Hammer, guitar legend Zakk Wylde picked the 10 songs that best tell his story, from Ozzy Osbourne to Pride & Glory and Black Label Society. Following is an excerpt from the rundown.

Zakk: "If we’re talking about the 10 songs that tell my story, we’d have to start with 'Miracle Man' as that’s the first song I wrote with Oz. Hearing that on the radio the first time was pretty insane; I’d never made a record before that or even been in a studio of that magnitude.

That first album was a learning experience for me, working with Keith Olson on my guitar tone. I’d be playing Ronni Le Tekrø from TNT, '10,000 Lovers' and he’d go 'Cool, keep playing and we’ll get that sound from you too.' We were in England and every day we’d record, then go back to this pub called The Wheatsheaf, jamming and drinking from around 11 in the morning - things got pretty hilarious."

Zakk: "The framework of what Ozzy does was all set by Randy Rhoads on those first two Ozzy albums. That’s the template for how an Ozzy car is made, but you can make tweaks on that design to do something different – like what Jake (E. Lee, ex-Ozzy guitarist) did with Bark At The Moon. At the same time, that means something like the banjo intro to a song like 'Losin’ Your Mind' would never really fit into how an Ozzy record should look or sound. It’s too much of a southern rock flavouring, even if on a song like Mama I was putting a bit of a country spin on the guitars, bringing a bit of a Allman Brothers 'Melissa' type thing into it.

I ended up doing Pride & Glory up in Seattle with Rick Parashar, the three of us – me, James (LoMenzo, bass) and Brian (Tichy, drums) living in a house that he owned and using this rental car, so it was non-stop shenanigans the whole time we were there. It was fun doing so much we didn’t have room to do in Ozzy’s stuff, like using mandolin on 'Lovin’ Woman'. We didn’t double the guitars or anything either – it was a real power trio vibe, more like Cream approach as opposed to Ozzy where everything gets built from the ground up."

Zakk: "I called Oz and asked him to do the background vocals with me for 'Stillborn'. We did the video for it with Father Rob Zombie which was great fun too. I was just trying to write a song based off a riff and to use as few crayons as possible – if I give you only three ingredients and ask you to make a meal, I’m interested in seeing what you can put together.

When people go 'Oh man, imagine if The Beatles or Jimi Hendrix had Pro Tools, wouldn’t that be great?' and I’m just like… no. The reason they’re so great is because they had so little to work with, they had to use their imaginations to bounce tracks and create something that didn’t exist. If you’re there and can only use two strings, I wanna hear what you can write. 'Stillborn' was exactly that – it’s one note, F-sharp. That’s how I’ve always approached the Black Label stuff – how much can you do with as little as possible?"