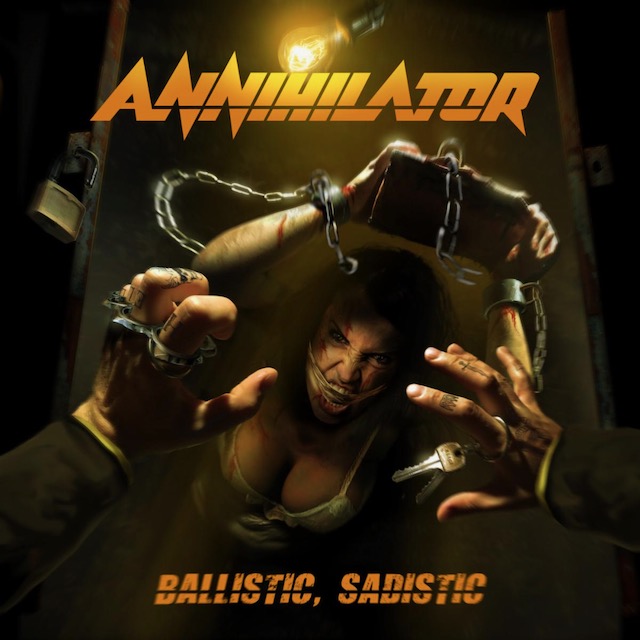 Annihilator frontman / founder Jeff Waters is notoriously critical of his own work. An album that he is 100% pleased with upon release can ultimately end up being dressed down a year or two later as "not my best work" or "a 6 out of 10" in the press. A surefire sign that the man is always trying to improve himself rather than resting and relying on past glories like Annihilator's first two untouchable classic records, Alice In Hell (1989) and Never, Neverland (1990). This dynamic duo is the benchmark for Annihilator fans everywhere, of course, and as a diehard follower that has found some worth in most (not all) of Waters' albums it's gotta be said that with Ballistic, Sadistic he has finally managed to bring Alice home.

Maybe it's the success Annihilator has had on the live front over the last few years, maybe it's the positive turns of Waters' personal life, maybe it was having drummer Fabio Alessandrini in the studio rather than relying on programmed drums - or all of the above - but Ballistic, Sadistic is by far the heaviest, fastest, best written / arranged Annihilator record since Refresh The Demon (1996). And by "heaviest" we're talking the full-on tasteful and tight guitar shred that made Annihilator famous with classics like "W.T.Y.D", "Human Insecticide", "Reduced To Ash" and "Alison Hell".

Lead-off track recalls the "Armed To The Teeth" recalls the Never, Neverland sound / execution in a big way, hitting like a freight train right out of the gate, loaded with the iron-handed guitar groove calling card that makes Annihilator's sound unique. The doom heavy intro "The Attitude" is a great fake- out, leading into high speed acrobatics that are a welcome theme for the album. In fact, after you get through the straight-ahead borderline rock of "Psycho Ward" and the Slayer-esque thrash "I Am Warfare" it's best to fasten your seatbelts. Seriously, if you've been following Annihilator over the last 20+ years, nothing prepares you for the 1-2-3-4 high speed assault of "Out With The Garbage", "Dressed Up For Evil", "Riot" and "One Wrong Move".  Haven't heard anything from the Watersound bunker on this level since Refresh The Demon, but not only that, they are instantly memorable songs. Extra points for the mid-song schizophrenia of "One Wrong Move"; love the way it goes from evil to not to back again.

The album winds down with "Lip Service", which is an obvious tip of the hat to an Annihilator favourite from Set The World On Fire; I'll go so far as to call it a cover of "Knight Jumps Queen" and admit that I love the idea. It ends with the speed thrash gold of "The End Of The Lie", a cap on what is without question the most potent Annihilator record I've experienced in 20+ years. And fucking hell, this is an experience.

It's definitely worth noting that Jeff Waters has come into his own as a vocalist on Ballistic, Sadistic. He's had no easy task of it (since 2015) going against a legacy written by the late Randy Rampage, Corburn Pharr, Aaron Randall, Joe Comeau and Dave Padden, but compared to his initial outing as a singer on King Of The Kill (1994) and being front and center on the last couple records (Suicide Society - 2015, For The Demented - 2017), Waters kills it this time out. Chalk it up to his live experience, but there is grit and growl in his voice that wasn't there before, adding a certain Rampage rage to the sound that negates the need for the high-end vocals that he can't pull off (yet).

Definitely wasn't expecting get knocked on my ass considering the last few Annihilator records, in the end, left me cold. A great way to start the year, and easily in my Top 5 Annihilator albums of all time.