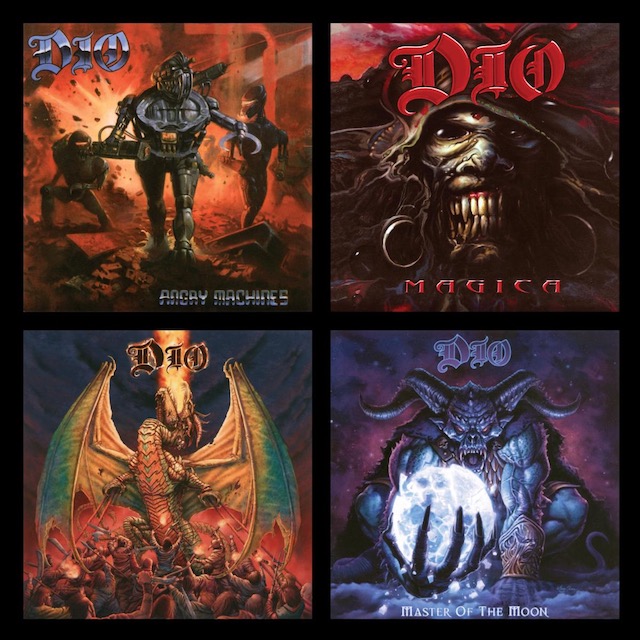 Out of print for many years, now remastered, Angry Machines, Magica, Killing The Dragon, and Master Of The Moon, 1996–2004, are now available as CD deluxe versions in mediabook packaging and includes a second disc featuring rare and unreleased bonus material. In addition to rare studio tracks “Electra” (included on Magica) and “Prisoner Of Paradise” (on Master Of The Moon), each bonus disc includes a selection of both rare or never before released live tracks from the accompanying tour for each studio release.

Angry Machines
Originally released in 1996, the lineup: Ronnie James Dio on vocals, guitarist Tracy G, Jeff Pilson on bass, Vinny Appice on drums, and keyboardist Scott Warren, must say Machines is an inferior follow-up to 1993’s Strange Highways, where this same lineup also appears. It’s a combination of things which makes this album miss the mark – the fuzzy guitar textures at times, awkward harmonics, too many slow tempos, the mix, irregular arrangements for a Dio album. From the first song “Institutional Man” you are brought down, “Don’t Tell The Kids” is better with more energy and chorus, but “Black” is a grungy stumble. “Hunter Of The Heart” is the best of the lot, more classic Dio and chorus section. The majority of this album is just really different from the Dio back catalogue, see “Stay Out Of My Mind” (although, the brief dark orchestral break is interesting) and “Big Sister” (those harmonics are awful) that suffer from a dingy rhythm section, gloomy lyrics and forgettable chorus. There is a better guitar and beat in “Double Monday”, still a lifeless chorus, “Golden Rules” and “Dying In America” are a little better but mediocre. “This Is Your Life” is just depressing.  An album surely a product of its time. The 12 live songs from 1997 are fine, Tracy stays true to the original arrangements for the most part, but changes too many of the solos. At least he sticks to the program during parts of “Last In Line” and “Mob Rules”.
Rating: 4

Magica
Ronnie Dio’s first try at a concept album (there was supposed to be two other parts), Magica is nine songs bookended with four intros/reprises. With guitarist Craig Goldy, Jimmy Bain (bass), and drummer Simon Wright back in the band restores ‘80s Dio storytelling, arrangements, sounds, tones, harmonies, and melodies from the album Dream Evil. Understandable not quite the first two albums, Bain’s songwriting, Goldy a different player from Vivian Campbell, the approach to riffs brought to Dio’s music more a Sabbath (see “Lord Of The Last Day”), and Rainbow/Blackmore composition, unlike Campbell’s traditional straight forward riffs or classical pieces. “Fever Dreams” and “Turn To Stone” riffs indicative of Goldy as it shuffles along, “Feed My Head” includes dramatic pause mid-way. Pacing fit for the Lock Up The Wolves album, seven minute “Eriel” has with a solid verse/bridge with accenting keys, yet no chorus? Odd. “Challis” is the album’s winner with a simple straight forward riff and arrangement that flows right into the chorus, which again doesn’t use the title. “As Long As It’s Not About Love” one of Dio’s most poetic ballads. Bonus disc includes some ruff live versions of the album’s songs, “Electra” intended for Magica II or III, and Ronnie reading the Magica story.
Rating: 7

Killing The Dragon
In 2002, guitarist Doug Aldrich (ex-Lion, Hurricane, House Of Lords) comes into the fold, with Jimmy Bain back, and Simon Wright returning. Of these four albums Dragon has the best production and mix, clean, sharp, and crunchy with bottom end. The title track opens the album in fine classic Holy Diver/Last In Line fashion with a big riff and fantasy chorus, “Along Comes A Spider” maintains the momentum, again, new guitarist so in the riffs you can hear Aldrich’s flair and phrasing in the solo. See also “Scream”, although the main riff in “Better In The Dark” may have been a Goldy/Bain leftover? Was never a fan of the generic chorus in “Rock And Roll”, or video track “Push”, the riff and delivery are fine but the chorus is not single worthy. Closing out second half of the album, “Guilty” could have worked on Dream Evil, “Throw Away the Children” is socially aware. Solid riff on “Before The Fall” and Rainbow keyboard solo, one of the stronger keepers. Disc two, six bonus live tracks are of average quality with a bit of a fuzzy mix.
Rating: 7.5

Master Of The Moon
Like the other albums from this era it’s a mixed bag, two, three, four songs you’ll go back to, rest are forgettable. Released in 2004, the line-up: of course Ronnie, Craig Goldy again, Jeff Pilson and Simon Wright back on rhythm. “One For The Road” kicks off the album with punch, complimenting riff and keyboard flow nicely into the title track’s chorus. “The End Of The World” is meh, but things rebound with the bass driven crunchy riffing on “Shivers” and slower Sabbathy moody talk box guitar on “The Eyes”. “The Man Who Would Be King”, somber, has a dramatic flair, “Living the Lie”, “Death By Love” rockers but not nearly on the level as those from the ‘80s. “I Am” and “In Dreams” are basically filler. Five bonus tracks, studio leftover “Prisoner Of Paradise” is average, best of the lot a great song that unfortunately got little love live, “Rock And Roll Children”.
Rating: 6