GOBLINS BLADE - Of Angels And Snakes 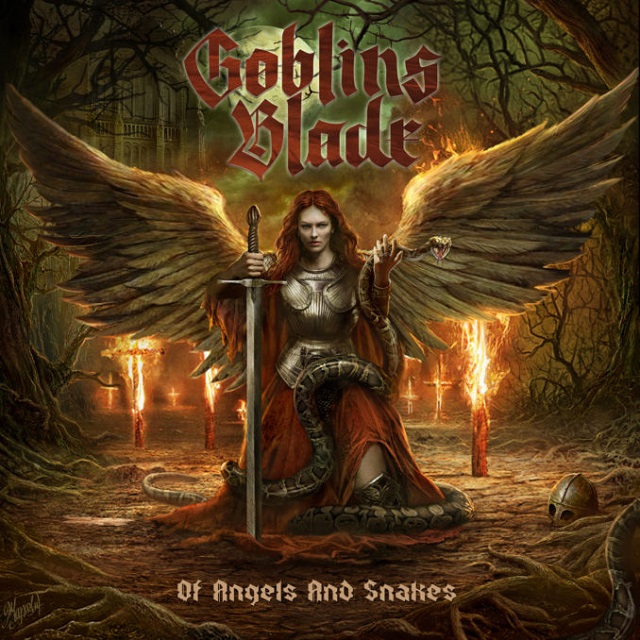 Lots of German scene veterans within the ranks of this debut, most notably former Sacred Steel guitarist Jörg M. Knittel. While he split from said band back in '06 (spending the intervening years in other projects), Goblins Blade (old Heathen song title) is a new entity, claiming inspiration from early proto thrash metallers like Metal Church, Savage Grace and (undoubtedly) the act from which they copped the moniker. That's old school US ‘80s metal (pre-Sunset Strip) for those too young to recall. Joining Knittel for this latest endeavor are singer Florian Reimann (ex-Destillery), Claudio Sisto on drums (ex-Mystic Prophecy) and former Chinchilla bassist Roberto Palacios.

In many ways, only makes sense for this kind of band to exist in Deutschland, a country that perennially reveres long dead bands/sounds, be it via boutique festivals (specializing in one-off reunions/resurrections), omnipresent metal bars, demo reissues and/or bands specializing in keeping the music alive. Exhibit A: fest favorite preservationists Roxxcalibur! The nine tunes offered are generally mid-tempo, sing-along (beer hall) chants, which is too bad, since the best material is of the speedier variety. "Snakes From Above" opener is a tasty appetizer, utilizing otherwise unheard gruff and higher register vocals. Pick of the litter is "Blink Of An Eye", built around a gritty, headbanging riff. While it might not live up to its title, "Utopia" is another fist thrusting mover. Can't get away from the chiming intro to "The Bell Is Broken" recalling a similar start to Metallica's "For Whom The Bell Tolls", down to the pregnant pause between each 'clang', prior to any guitar. Unlike the better known outfit, the tolling is recurrent throughout. "Call For Unity", with titular chorus, has the making of a live favorite, after all, that's the venue where Teutonic metal shines.