JUDICATOR - Let There Be Nothing 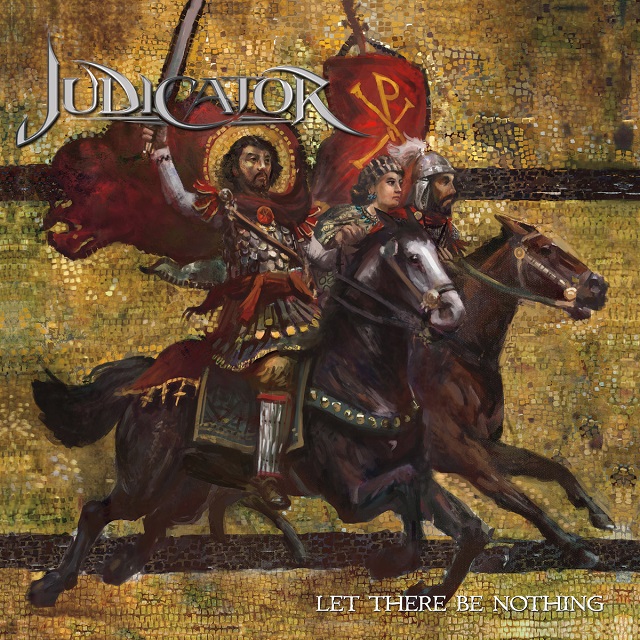 For their fifth album, US power metallers Judicator work their way up to Prosthetic, a label with international pull and (more importantly) distribution. Once again, it's a historical concept tale, this time following Flavius Belisarius, a Byzantine military commander, who recaptured much of the Mediterranean territory lost by the Roman Empire. More than just a war narrative, Judicator delve into political struggles and the leader's personal life, including an adulterous wife. In an authentic touch, the cover art looks like an ancient tile mosaic. The eight tracks (frequently spanning 8 or 9 minutes) avoid any hint of the disputed aftermath, where Belisarius may or may not (scholars disagree, although painters & artists have relished the subject) have been blinded, on orders from the Emperor Justinian. Now there's a story! Yeah, but does it rock?

Although it opens nearly a cappella, it's not long before "Let There Be Light" kicks into a majestic rollicking, widely changing dynamic ride that recalls prime Blind Guardian. Speaking of the Germans, John Yelland's higher register is oft a doppelganger for Hansi Kürsch (who guested on the last full-length), no small compliment! Follow-up "Tomorrow's Sun" is a heavier, (speedy) heads down metal composition, but then, seeking to show they're more than just "another power metal band", Judicator employ piano, during the slower, jangly introductory phase of otherwise mid-tempo "Strange To The World". Probably the most vanilla (played straight through, minimal embellishment) is the shortest tune, at 4:53, "Autumn Of Souls" and there's something to be said for just blazing through. Gritty, fuzzy riffs greet the female backed (courtesy of Mercedes Victoria) "Gloria". More acoustic guitar, to begin mammoth length "Amber Dusk", as well as accompanying the nearly a cappella "la, la, la" section, midway through "Way Of A Pilgrim". The final trio average nine minutes each and probably could have used a brief, full scale "rock out" intermezzo amongst all that grandeur.

Good to see a domestic label give power/traditional metal a chance.