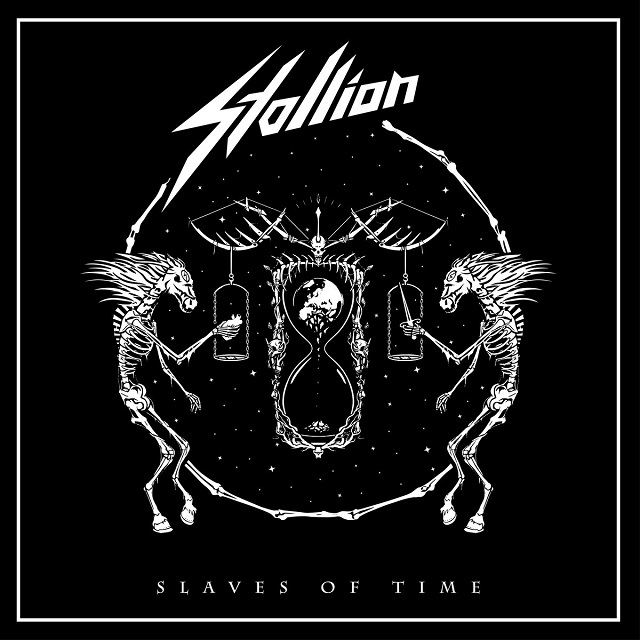 German traditional metal outfit returns with their third full-length (the first in three years). In the interim, Stallion has seen their international profile increase, thanks to numerous festival appearances, in and out of their homeland. Continuing with the high energy delivery and even more stratospheric vocals (courtesy of single-named singer Pauly, he of the studs and Japanese war flag printed spandex pants. Seriously!), "No Mercy" rivals old school speed metal. A look to yesteryear is definitely ingrained in the grooves (even if it's a digital download). Overall, the ten tracks feel heavier, including "Brain Dead", with a snippet of King Diamond style falsetto.

A ballad you'd more expect to hear on a GN’R or Bon Jovi platter, apart from Pauly's caustic, double-tracked voice, the 7:06 jangly/acoustic begun "Die With Me" is the lone number to crack the five minute barrier (in fact, several fail to last four minutes and Lemmy inspired "Dynamiter" is just 2:38). Not sure who thought his vocal shortcomings wouldn't be noticed. It's passable, in the mid-section, where the pace quickens (before ultimately ending the way it began). The lone stubbed toe on an otherwise well pedicured platter. The pre-release single/video "Kill The Beast" is in the same mold as the aforementioned speedsters, plus a nice little guitar shuffle pattern therein. The "Meltdown" finale is a fine slice of clickety-clack Teutonic metal: powerful, but with a sing-along sense of melody. Apparently so difficult to master, beyond German national boundaries. The fact the lyrics namecheck great metal bands is just an added bonus. See what all the overseas fuss is about.