AC/DC’s Brian Johnson Breaks Our Balls - “I Think You're A Rotten Swine For Asking! What A C*nt!”

On the 27th anniversary of AC/DC’s 13th studio album, Ballbreaker (released on September 26th, 1995), the legendary band united with producer guru Rick Rubin in the studio for the first time. Rubin had been longing to record them for ages. And with legendary Canuck Mike Fraser co-producing, AC/DC delivered a blues-soaked raucous follow-up to the massive, The Razors Edge, led by such memorable tunes as “Hard As A Rock”, “Cover You In Oil”, “Whiskey On The Rocks” and “The Furor” as some of BraveWords’ faves. Purists were pleased. Let’s reminisce as we unearth a classic Brian Johnson interview from back in the day! 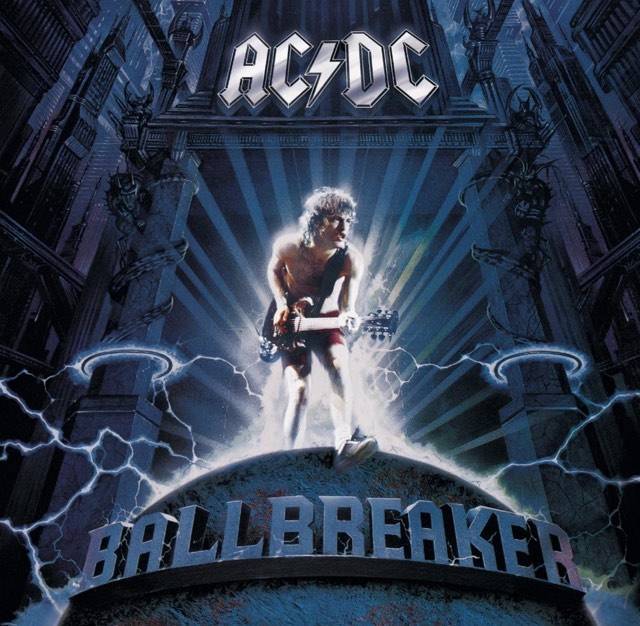 BraveWords: It’s been a long five years since The Razors Edge.

Johnson: “We've been real busy - we haven't just fucked around. I mean we did The Razors Edge tour for two years then we put out a live album. Straight after that we did Schwartzenneger's thing in Los Angeles. From August 'til July we had off. But even then Angus and Malcolm were working on songs and I was busy. Last August we got together and we've been working since then. We didn't want to be rushed on this album. And it was fun. We had the greatest time. I didn't want it to end.”

BraveWords: What were your first  impressions when you heard the finished results of Ballbreaker?

Johnson: “I’ll tell you what it is. It was the same way with me, when I got my first CD copy. I had my little rough tape from the studio, but when I got the disc, I put it on my good speakers at home and I went 'Fuck! Why do I like this. What's different?' Rick Rubin and Mike Fraser made it so dry that you almost think you're in the room with us. There's no bells and whistles. There's no embellishment. You can almost feel it pressed against your face. It's just as dry as dust. The songs are great as well - you've got to have great songs. But the enthusiasm that comes across is not instantly recognizable. It makes you feel that you're part of it.”

BraveWords: The album is raw, bluesy and bare bones, similar to Flick Of The Switch.

Johnson: “Unfortunately with that on me, it wasn't as big of a success as the previous two. We didn't have a corporate hit. Thankfully our fans classify it as one of our best rock albums. It wasn't as memorable as the other ones, 'cause we didn’t have a big single off of it. We just went in to do a good rock record and it deserved a lot more recognition than it got. Funnily enough, when we meet fans on the street, they'll always say that the record was one of their favorites. That makes us feel warm inside, 'cause we knew we were going to get shit-canned from the label.”

Johnson: “Malcolm and Angus wrote the lyrics on this record, 'cause I just fuckin' ran out of ideas. There comes a point when there's nothing left. When they did most of the stuff on The Razors Edge, I could see this great writing team coming up. It was fresh 'cause that hadn't seriously tapped into that before. It just came to fruition on this album. I had a ball, 'cause everything was layed out for me. Obviously I contributed to bits and pieces here and there, but basically the songs were structured by the boys in such a way that all I had to do is pick up the words and sing. There's this team-work, comaraderie that comes across the speakers.” 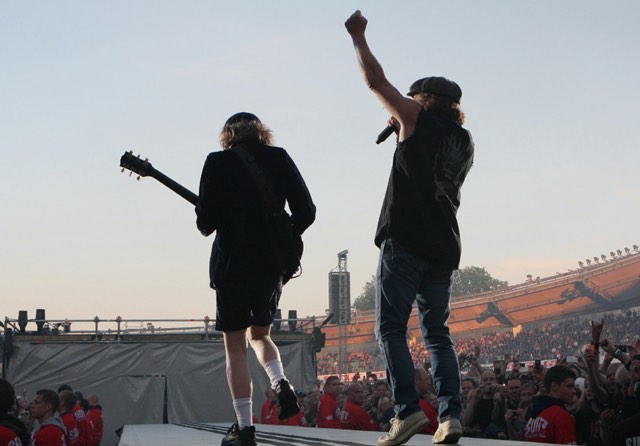 BraveWords: How did it feel to have drummer Phil Rudd return to the team?

Johnson: “Obviously that was part of it. We had Chris in the band - fabulous guy, great drummer, nobody's better. When we finished the last tour in New Zealand, Phil was there and we hadn't seen him for ten years apart from a postcard now and then from the lad. We didn't think he could survive staying on the road in '84. Last summer when we were in London, Malcolm called me up and said that the boys were getting together to have a bit of a jam and too see if there was anything there for an album. Phil was in London as well and he came down to see us and we said, there's a set of drums, why don't you have a bash. Basically, we started playing and this big smirk came over our faces. It was like sticking on your favorite pair of jeans. It just fit so good. It wasn't a competition of who the better drummer was. It was a case of styles. Of course, Phil had been with us many years before and was part of that groove. I think that the comeback of Phil cannot be stressed enough. That groove, slow-hand type of playing that just sits in there. He tends to know what Malcolm and Angus are going to do. As Malcolm says, when Phil plays the drums, he doesn't have to think about what he's doin'. Chris was sort of a hired hand and it was a shame 'cause he was such a good guy. It was one of those things that we had to be fair to the fans. We suppose to have a commitment and it's the fans that are going to be happy. Chris may be a little unhappy about it, but he's a big man and a professional and that's the way things go in this business.”

BraveWords: Essentially you are still the “new guy” in the group. How have you managed to fill Bon Scott’s shoes?

Johnson: “The total Bon freaks will never accept me and I admire them for that and I understand. Most people seem to like both eras. Obviously, I could never step into Bon's shoes. He was such a unique individual with a great style. He carved his own niche in rock 'n' roll history. I would never be able to take or would try to take anything from him. I'm just happy the boys picked me and I'm proud that they didn't want a clone. I'm happy they did, 'cause now I've got a gig! But with my voice sounding really low, I sound like a dirty old man. Well it's great, 'cause a few chicks who have heard have said 'That turns me on big boy!' We had a ball doing them. Myself, Malcolm and Mike Fraser in the control room. Of course when I sing, I'm not standing still. The boys were having a good laugh at that. The humour level was at a high. You can't really take those things seriously - it's all tongue-in-cheek. The only serious song on the whole album would be 'Burnin' Alive', which was a reference to the kids who died at Waco, Texas. It's about people in charge fuckin' up big-time.”

BraveWords: AC/DC have never had too much banter with the audience. Why?

Johnson: “We just don't talk. All the other bands have said it all. 'Hey Toronto, you're great, love your chicks. You guys are fuckin' crazy, you're wild.' It's been said. What the fuck do I have to say. The more I talk, the less songs I sing. But I'm always like that. I'm a bit shy on stage. I'm not a slick talker either. I could be dead wrong - they might like that. But it seems to me when someone says 'You guys are the greatest in the world', I have to ask myself, did you say that last night you piece of shit, two-bit swanker. When I'm on the phone, I have a great time. I'm just an instrument, which doesn't say that I have to talk. A lot of it's baloney. I just usually stand back and do me bit.”

BraveWords: Talk about the excesses of being in a rock n’ roll band.

Johnson: “We're not that daft. Cigarettes we can't deny. There were four cardboard boxes brought in and they're all gone. We enjoy our smokes. But the drinkin' - we never drank a thing in the studio. Water, coffee tea. We wanted this album to be good and we worked hard on it.”

BraveWords: Do you have any contact with your Geordie lads? A possible reunion?

Johnson: “Never in this fuckin' century! This century's almost over. I fuckin' very much doubt it and I think you're a rotten swine for asking! What a cunt!”

(Side note: this photo below is from an AC/DC meet n’ greet where I mention to Brian that I was the guy that he called a cunt! Very funny BraveWords moment!)


BraveWords: How does it feel to be one of the biggest bands on the planet?

Johnson: “We don't know. Being in AC/DC, we just surround ourselves with AC/DC. We're in our own little world and we don't listen to this jibberish around us. Sometimes it's quite a shock, when we hear these rumours. Usually we like to ignore them and they usually go away. This time they were a little bit more severe and we saw them in national newspapers in England. Of course they start using the word legendary, which makes it worse. I thought you had to be fuckin' dead to be a legend. We thought it might be the promoters saying 'The thunder returns to Toronto...for the last time!' That doesn't help us 'cause then we'd have people coming to the show sayin 'We'd better see these cats before they're fuckin' dead!' We'll probably be two years on the road, take a few months off then return to old nervous, rock 'n' roll addiction once again."

BraveWords: Any truth to the rumours that retirement is just around the corner?

Johnson: “We've heard that fuckin shit! It was the same before the last album and it's all bullshit. That's crap. I've never heard anything like that. Angus and I were talking after our first set of interviews and we got the shock of life. We can’t do anything else! We have no fucking skills, what the hell are we going to do with ourselves? If I got old and me voice didn't work and I refused to go on the road 'cause I didn't want to make a cunt out of myself in front of the fans, then they'll get another singer. AC/DC are too big. If Angus left, then that's a different story and the band is built around Angus' image. Even Malcolm left for two years and we brought his nephew (Stevie Young) in and he's the powerhouse behind the whole band. When that happened, I thought 'Wow, almost everybody is replaceable!' Don't worry, it's all crap.”

Johnson: “Every gig. Every fuckin' gig I swear. I'm not bullshitting. Every time we get on stage we get butterflies.” 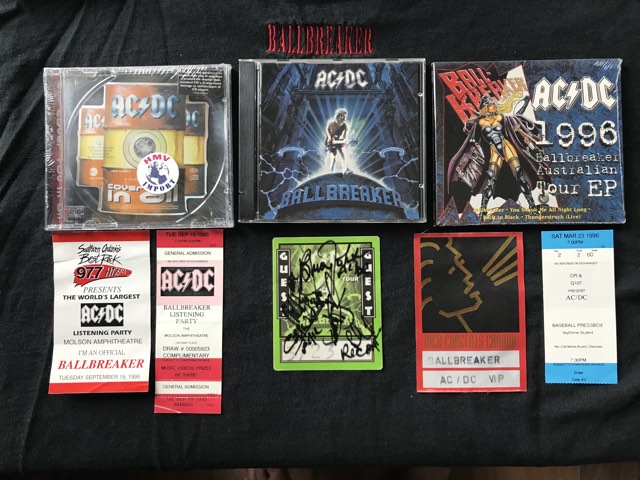