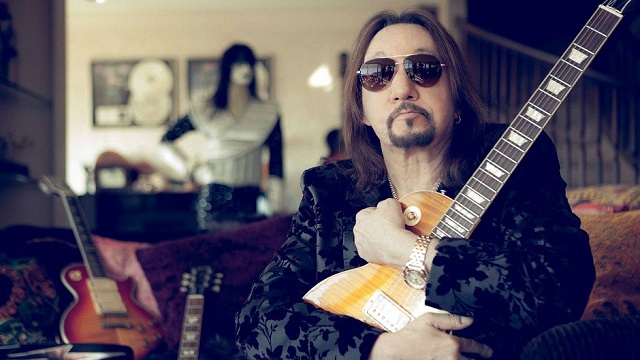 Space Ace is the possessor of one of four great voices to come out of a band you might have heard of called KISS. But what he does with it… well, his sort of punk rock singing style is a little to the wild side of what Gene, Paul and Peter brought to the band. But then again, Ace put the sass in KISS, and he’s still bringing it, hollering up a storm on a new covers album called Origins Vol. 2.

“Originally it wasn’t my idea,” begins the Spaceman. “It was eOne’s idea to do Origins Vol. 1, and it turned out so well, having guest stars and just putting my personal stamp on other people’s material—it was so much fun. So I was very much looking forward to doing Origins Vol. 2. And I think it comes across on the tracks once again that we were all having fun doing this record.”

Most of the songs Ace covers here are anchored by a legendary rock icon at the guitar position. Asked which of these guys scared him the most when he first heard him, Ace figures, “Jimmy Page. And obviously Eric Clapton. But I mean Hendrix was visually—and orally, sound-wise—probably one of the most innovative guitar players ever, at the time he came out. The feedback and the effects he would get on guitar was just amazing. I picked up visual things from everybody that I saw, obviously, and then I looked to their records numerous, numerous times until I ended up learning their guitar solos. Like I said in the past, I’ve never taken guitar lessons, but those were my teachers (laughs).”

Central to the album on a conceptual level is “Space Truckin’,” for which Ace has done a nifty animated video. “If you listen to my guitar solos, I don’t really playing anything like Ritchie Blackmore,” notes Frehley. “I’m more of a blues-based guitar player. I had recorded that several years ago at my friend’s studio, Matt Swanson, the Creation Lab, and I just basically Ace-ified it and put my stamp on the solo. I redid the solos, you know, from the original track, which we cut several years ago and redid some of the vocals and just tuned it up and I think we edited it a little. We definitely edited it a lot for the video, if you note the length of the video and the album cut. But my good friend Rob Sabino did a great job on keyboards; it all just came together this record.”

Another highlight is “Jumpin’ Jack Flash,” where Ace cedes the microphone to Lita Ford. “We didn’t do an extensive tour, but they opened up a couple of shows for us,” replies Ace, on his memories of The Runaways. “We knew them from the New York scene. I think Joan was the first one of the Runaways that I met. And then once we got on the road we became friends with all of them. I was dating Jackie Fox for a short time. I think she’s a lawyer now. From bass player to lawyer—whatever. I actually bumped into her about a year-and-a-half ago, when we were doing a listening party at the Rainbow in Los Angeles for Spaceman. And she’s still looking good. All the girls in the Runaways are still doing their thing, except for, obviously, Sandy, rest in peace, the drummer.”

“Musically they were a good band, but what they had was attitude,” continues Frehley, enjoying the memory. “And look, I think they had a lot of guts to get up there pretty much in underwear (laughs). Guys would just go crazy for them. And it really didn’t matter what they were playing. The guys were there to look at them and watch them move and shake their butts (laughs). But they were just, you know, a one-of-a-kind girl band, one of the first of several girl bands to evolve over the years. And Lita had always kept in touch over the years. She’s opened several shows for me over the last five years, playing with my Ace Frehley band. She did ‘Wild Thing’ on Origins Vol. 1, and when I invited her to do these new songs, we came up with ‘Jumpin’ Jack Flash.’ I really didn’t want to sing it, because I’d sung several Mick Jagger songs and I wanted a different spin on it. So I figured a girl singing ‘Jumpin’ Jack Flash’ would be great. And Lita killed the vocal on that. Spent two days with her working on that, and coaching her on the vocals. She spent the weekend at my house in San Diego and we just had a blast.”

Another special guest is Robin Zander, taking control on “30 Days in the Hole.”

“Cheap Trick used to open for KISS in the ‘70s,” explains Ace. “We did 75 to 100 shows together. I used to hang out with those guys after the show and they were a bundle of laughs, to be around. And we’ve remained in contact with each other over the years—we’re all good friends. And I bumped into Robin. Robin came with his family to an autograph session several years ago, when I was doing an autograph session at one of the crazy conventions that we do. He expressed interest in singing on one of my records and I never forgot that. And when I wanted to do a Humble Pie song, I knew I wasn’t going to be able to sing like Steve Marriott. Not many people can (laughs). Steve was a little guy, but boy did he have a voice. I remember meeting Steve Marriott at a loft party in Manhattan. He was playing an acoustic guitar, and he started singing, and I looked at my friend Bob and I said, ‘He sounds like he’s got an amplifier in his throat.’ I mean, the way his voice would project was unbelievable. And he smoked on top of it. I don’t know how he did it. But he could really belt it out, and there’s no way I could’ve sung a Humble Pie song. So I thought of Robin, and Robin just killed it on that song. He did a great job. But it’s a great song.”

“Everything you hear rubs off on you,” answers Ace, asked if Cheap Trick’s success in the late ‘70s had anything to do with KISS’s left turns for Dynasty and Unmasked. “Everything goes into your subconscious and everybody steals and borrows. I mean, I’m a combination of Jimmy Page, Jeff Beck, Eric Clapton, the Beatles and the Stones. Like I said, those are the guys who taught me how to play guitar. Everybody steals a little from everybody else and gets ideas or puts a twist on them. And that’s the fun of doing these Origins records. I just take a song that’s already written. I don’t have to worry about writing it. I just kind of make it my own.”

Deep into the record, after a trip into the ‘60s for three songs, Origins Vol. 2 ends with Kiss classic “She,” from 1975’s Dressed To Kill.

“We had been performing it live before the pandemic hit,” explains Ace, on the choice of “She.” “We were on the road, and it was a lot of fun to perform live, and of course there were the early memories of KISS in the early ‘70s. Plus the guys in my band did a great vocal on that song. And so when the record company asked for a bonus track, a KISS track, I said, ‘Well, what about “She?”’ I was gonna try to get Peter Criss to play drums on it, but he had injured his shoulder. So he wasn’t able to perform drums on it. But I was able to get my touring band on the record, and let them showcase their vocal ability. Because everybody in the band sings.”

And whenever I ponder Dressed To Kill, I always think about acoustic guitar, which is used deftly on this record on Ace’s cover of “Lola,” by The Kinks. Tony Iommi famously doesn’t like acoustic guitar, but what about Ace?

“Well, I learned to play guitar on my brother’s acoustic guitar. He taught me, you know, just remedial chords, E, D, and A, and I started learning on an acoustic guitar. And then a good friend of mine got an electric guitar, and once I picked up an electric… number one, it was lighter and smaller, but number two, you could plug it into an amp, and all of a sudden you got all this volume at your fingertips. So I hit an E chord with the amp on ten, and I said, ‘This is it. This is what I want to do.’ ‘Rock Bottom’ was done on a 12-string. If you remember, I had a cherry sunburst SG doubleneck that I used on the reunion tour, when we decided to revive ‘Rock Bottom,’ for the show. And funny story behind that, I have the only cherry sunburst doubleneck that the Gibson custom shop made in the world. Because all their doublenecks are made out of mahogany, which is a darker wood than maple. So I got a phone call from the head of the custom shop; he goes, ‘Ace, we can’t make a cherry sunburst out of this because the wood is too dark. So we’re not going to be able to get that light yellow in the centre.’ And I told him, ‘Bleach the wood with Clorox’ (laughs). And it worked! And that’s what happened. Just a little trick I knew.”