ALCATRAZZ – “The Direction Was Nailed” 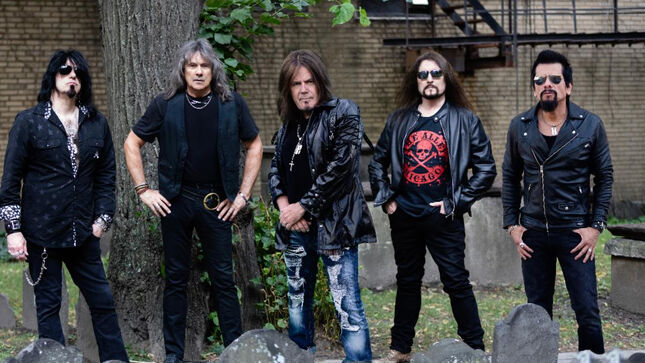 Alcatrazz have been through the ringer as of late, breaking ties with singer and lyricist Graham Bonnet rather publically over the last year-and-a-half. But it seems like it’s a Band-Aid that had to be ripped off a wound eventually and now it is done. More on that from founding member and keyboardist Jimmy Waldo in a bit, but the story is basically this: the band wanted to go in a rip-roarin’ no-holds-barred neoclassical direction that is in fact a couple of quantum leaps beyond even the legendary debut album with Yngwie Malmsteen, namely 1983’s No Parole For Rock ‘n’ Roll, and Graham’s tastes just don’t go there. And that’s where the band’s fifth record, V, most definitely goes, with Waldo promising, “The direction was nailed.”

The band now consists of founding members Waldo and bassist Gary Shea, along with Joe Stump on guitars, Mark Benquechea on drums and pedigreed Englishman Doogie White on good singin’ and words of wisdom.

“It’s a more cohesive record in that it’s a real band,” begins Waldo, comparing V to the band’s last record, Born Innocent, which this writer voted his favourite album of 2020. “These members in this band are solid, whereas with Born Innocent, we had to start that record with no guitar player. Joe Stump was not in the band. So we started that record thinking, well, we’ll do this with people from our past. Bob Kulick and I and Graham had a band called Blackthorne, so we thought let’s bring Bob in for a couple songs (note: Kulick has since died, passing on May 28, 2020). Chris Impellitteri came in, because of Graham’s past with Chris, and I’ve known Chris forever; we’re good friends. And Dario Mollo, Italian guy that Graham had worked with who’s a super-talented guy, producer, guitar player, writer, blah blah blah. So we just thought, let’s get going, let’s make a record with these guys.”

“And then Joe got involved about halfway through. So the writing wasn’t as solid on that record. I think there’s really good songs and I’m proud of that record, but it’s just not as consistent as V. Whereas this record was written by all the people in the band. Joe wrote the bulk of the material, Giles Lavery, our manager, wrote a thing, he and I wrote another thing together. I wrote a couple of things. Doogie wrote all the lyrics and melodies, except for one song with Giles. And so it’s all with our group of people here. This time it’s very consistent. The direction was nailed. We knew exactly what we wanted to do and just went for it.” 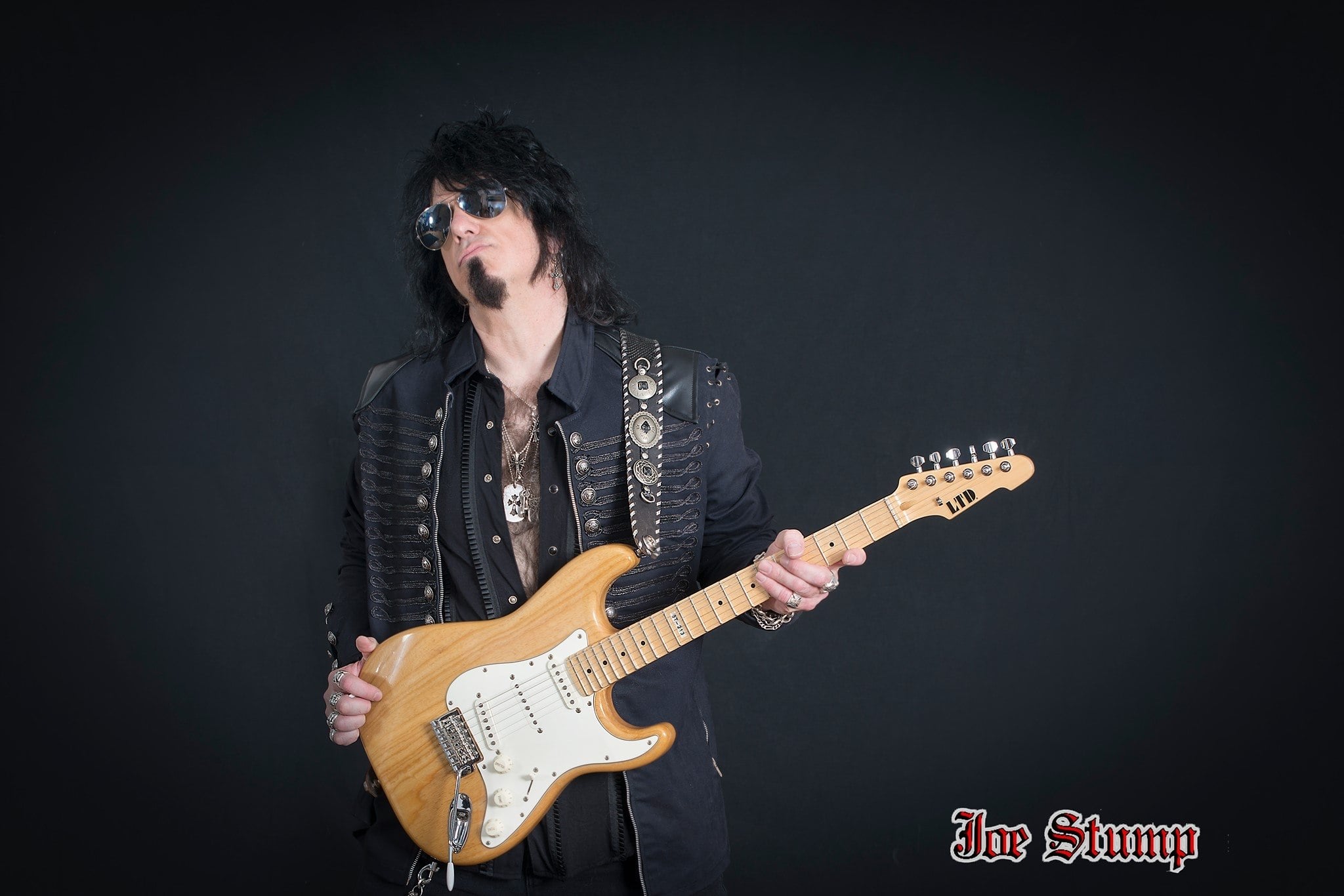 Central to the situation is Joe Stump, who indeed points the ship towards its original premise.

“Right,” begins Jimmy. “He’s influenced by Ritchie Blackmore and Yngwie and all that. He’s the neoclassical guy. Joe really sounds more like a European guitar player than an American guy. But he is from New York. He teaches at Berklee in Boston. Joe is a neoclassical shredder with an incredible depth of music because of his teaching background. Joe can play anything, really, but what I really enjoy about Joe is his, what I call the reckless abandon. It’s that thing that Cheap Trick has got. Rick Nielsen, he’s not up there trying to impress any guitar players. He’s going for it, you know what I mean? I toured with Cheap Trick and I love those guys. Pete Townsend is like that too. And Yngwie was that way. Yngwie just played his ass off; he went for it. And Joe is like that. Joe is a very impressive player and has fun and that’s what I like about him. A lot of guys who play that fast and do that kind of music are very concerned with, ‘Oh, I gotta play perfect for the guitar players that are watching me.’ Joe is not like that. Joe plays the stuff great and accurately, but boy, he is going for it every time he walks on stage (laughs). So that’s what I really enjoy about him. Plus just as a person he’s fun to work with.”

Doogie is a great addition to the fold, the perfect choice given his past with late-period Rainbow and even later-period Michael Schenker. Plus he’s part of the same generation as the Alcatrazz guys and thinks the same way, especially with respect to how to compose vocal melodies that interface regally, royally and timelessly with the maestro-strosity of Joe Stump.

“Doogie writes about real life experiences although he’s also written about dreams,” answers Jimmy, asked about Doogie’s hot buttons when it comes to lyrics. “‘Alice’s Eyes;’ that was a dream. But it was a real experience for Doogie, so it wasn’t something he made up. It’s not like, ‘Oh, I read about this fantasy’ that he didn’t know anything about. ‘Sword of Deliverance’ references history, which I love. Some of it is kind of dark, but dark in a good way, where he makes you appreciate something that happened in the past or whatever. It’s not dark like, ‘Oh boy, the singer’s kind of dark; he’s got problems,’ that kind of thing. A lot of guys write from there and hey, that’s fine too, but that wouldn’t be my first choice of lyrics. And Giles is a big horror movie fan. So ‘Nightwatch’ was written about werewolves, basically. Thinking about a movie. Which is just a fun topic. He and I have watched a lot of movies together and we’ve gone to some filming locations around LA where they filmed some of those classic horror B-movies and stuff.”

“But Doogie is a pretty deep thinker,” continues Waldo. “I mean, the stuff he writes… and the funny thing is, if you ask him, he’ll definitely take it apart and tell you exactly what it’s about in detail. He can explain. If you ask him point-blank, he’ll explain it in great detail. So I find him to be a very, very interesting writer. It always amazes me. You really gotta be a wordsmith to do that stuff. It’s not like the old days where guys would just pull stuff out of mid air, and be like, I don’t know, that sounds cool, let’s write some heavy stuff, you know, blood, guts and gore or about girls or whatever. Doogie is not like that. And Graham wasn’t either. Graham is a good writer, interesting writer.”

“He was not pleased with this direction,” reflects Jimmy, asked for a little more on the split with Bonnet. “And I love this direction. And everybody in the band, that’s what we wanted to do. One problem we had touring in the past was that a lot of promoters… we want to play the big festivals. And a lot of the promoters would say, well, you know, we love the band, but you’re not really heavy enough. And a lot of the music doesn’t have enough energy. It’s not consistently energetic, driving music. That’s just what you need for festivals. People come there to rock. You don’t come there to… That’s what they’re there for. So we wanted to be able to do that. We were missing out on a lot of that because the direction of the band was not 100% committed to that.”

With respect to some of the highlights on V, Jimmy says, “Well, ‘Grace of God’ is one of them. ‘Sword of Deliverance” I love. I like ‘Dark Day for My Soul’ because I wrote that music. I love that because it’s so different. When I sent that to Doogie, I didn’t know if it was going to fit the album or not. I just wrote a piece of music and had a concept in my head, sent it to Doogie and he loved it and came back with some scratch vocals immediately. And I love ‘Nightwatch;’ I love that kind of in-your-face, slamming kind of stuff. We had a lot of material to pick from. Joe had written a lot of stuff.”

“A lot of this music that we do is a lot of fun to play as a keyboard player, real challenging,” muses Jimmy in closing. “Joe writes and plays scales. I’m not a trained musician. I have no formal schooling at all. So like a Byzantine scale, for instance. Joe really likes the Byzantine thing. I never really thought much about it. Well, when Joe played it, I investigated, I got my books out, well, what is this Byzantine thing? And I love it. So I’ve written a couple of pieces based around that. He’s brought a lot of really cool things to the band musically. It’s way different than… it’s not blues-based; it’s a whole different thing and I love that. I like growing. When I worked with Steve Vai on Disturbing the Peace, same thing with Steve. Steve is in a whole ‘nother world. That took me in a whole different direction as a keyboard player, which I loved. And we started off with Yngwie and that was a whole different thing that made me think differently. So each guitar player has been a journey, and a really cool learning experience for me, because I’ve always loved playing with people that are above my skill set. Joe’s got chops that I don’t have and I love that because it pulls me up as a player and a writer and as a thinker.”