Between A Rock And A Prog Place: NICK D’VIRGILIO Retraces The Steps Of Studio Drumming For GENESIS 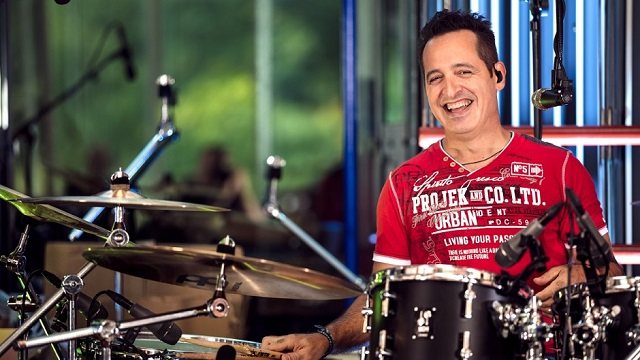 How does one get the gig of serving as a studio drummer for Genesis? Big Big Train’s Nick D’Virgilio recalls how he got the gig for the prog legend’s 1997 album, Calling All Stations.

“Surreal…crazy dream come true…weird – put all the different adjectives in one pot sort of experience. Because I never in my life would expect to be in that position. But once I was there, it was cool. It was pretty easygoing, actually. Mellow and fun. They’re nice guys. They were my favorite band as a kid, so that’s why I never expected to be there, because they were such a huge, iconic band. I saw an ad for the gig they played at Wembley Stadium back in the ‘80s – Phil Collins had long hair – and there was probably 120,000 people. They were a huge, massive band. So, to be in the studio and sit in Phil Collins’ drum room and play songs for Tony Banks and Mike Rutherford on the other side of the recording glass…it was incredible. It wasn’t really intimidating. I had to go into it thinking, ‘I have to do my own thing.’ Because you can’t compare yourself to Phil – he’s one of the most iconic drummers of all-time. He’s my favorite drummer of all-time, really. Still, to this day. And the guys didn’t really want me to play like Phil. They said that in a matter of speaking – ‘Don’t do what Phil would do. Just do your thing.’ So, they were really cool about that. And I think they meant it – I just went in and did what I did. I played to his drumming and to their music for so many years, it rubbed off in my style, anyway. So, I think that’s kind of how it may have even helped me get the gig a little bit, too. Because I had a lot of that sort of ‘DNA’ in my playing. I was on the road with Tears For Fears. And a buddy of mine that I played music with – Kevin Gilbert, who has long since passed away – was the guy who gave me my break in the music business, he heard that Phil had quit the band, and they might be auditioning drummers. I happened to be in London, and he said, ‘You should go find the management company’s office, Hit And Run, and see if you can get an audition.’ I just went for it. I found their offices, and I invited them to the Tears For Fears gig we were doing that night in London, and I had the very first Spock’s Beard CD that was the only recording I had by that time in my career. I gave them the CD and I didn’t hear back for a really long time. And randomly on a Sunday morning, Nick Davis – the producer and engineer – called and asked if I could send more stuff that I’d played on. I cobbled together some other recordings, sent them that, and then they flew me over to audition. From there, I got the gig. It was one of those things that after all of those years – and not having Phil in the band anymore – they were fighting an uphill battle. I think because he was such an icon and the face of the band and the voice, it was going to be tough no matter what they did. It’s a cool record. I know some Genesis fans hate it, some Genesis fans really like it. It just is what it is. I think Ray Wilson has a great voice – I think he’s a really cool singer. All I know is that I’m happy to have been a part of it.”

Trans-Siberian Orchestra/Savatage drummer Jeff Plate, has a new band, alta reign, which is releasing their debut album, Mother's Day, on January 8 via Rat Pak Records, and can be ordered here.

Austrian symphonic metal act Edenbridge will release a best of album, The Chronicles Of Eden Part 2, on January 15. A video for a song from the collection, ‘Tauerngold,’ can be viewed here. Also on January 15, Austrian symphonic power metal outfit Dragony will issue their new epic full-length, Viribus Unitis, via Napalm Records. A lyric video has been issued for the track ”Golden Dawn”. Also on the same date, Canadian orchestral avant doom collective, GATES, will release a limited-edition seven-inch, ‘Threads Bound In Lapis.’ The track serves as the first single and sampler from the band's forthcoming new full-length, Vas, coming this spring. Check out the video for the aforementioned tune here.

Texas power-prog metallists Immortal Guardian are set to issue their new album, Psychosomatic, due out from M-Theory Audio on February 12. The album follows their 2018 debut full-length, Age Of Revolution, also released on M-Theory Audio. The video for the group’s new single, “Lockdown,” can be viewed below:

Also on February 12, a new progressive rock supergroup, Arc Of Life (which features three members of the current YES line-up, vocalist Jon Davison bassist/vocalist Billy Sherwood, and drummer Jay Schellen), will issue their self-titled debut. A video for the track “You Make It Real” can be viewed here. And on the same date, symphonic metallists Sirenia will release their tenth album, Riddles, Ruins & Revelations, via Napalm Records. A video for the track “Addiction No. 1” can be viewed here.

Dutch symphonic metallists Epica will release their new album, Omega, on February 26 via Nuclear Blast (the band’s first studio album in five years). A music video has been issued for their second single, “Freedom - The Wolves Within,” which can be viewed here. Also on February 26, Swedish prog metallists, Evergrey, will release their twelfth album, Escape Of The Phoenix, via AFM Records. A video for the track “Forever Outsider” can be viewed here.

A pair of Finnish symphonic metallists have issued performance updates. First, Apocalyptica have postponed their Cell-0 World Tour North American headlining dates (with special guests Lacuna Coil) until fall 2021 due to ongoing COVID-19 restrictions. Secondly, Nightwish will start the Human. :II: Nature. World Tour In virtual reality – offering fans a unique experience by inviting them to a shared adventure at The Islanders Arms (a tavern built in virtual reality) on March 12 and 13, Tickets to both shows are available for purchase via the band’s website.

Canadian progressive instrumental quartet The Night Watch has released a limited-edition vinyl release of their 2019 release, An Embarrassment Of Riches (limited to 300 copies), and can be purchased here.

Tying in with Nick D'Virgilio’s recollections of recording with the short-lived Ray Wilson era of Genesis, how about this acoustic-mini set from 1997 (including one then-new tune, and a trio of classics)?