Between A Rock And A Prog Place: STEVE HACKETT On The Term “Prog Rock” – “It Covers A Wide Range Of Styles...Constantly Evolving And Appeals To An Intelligent Audience.” 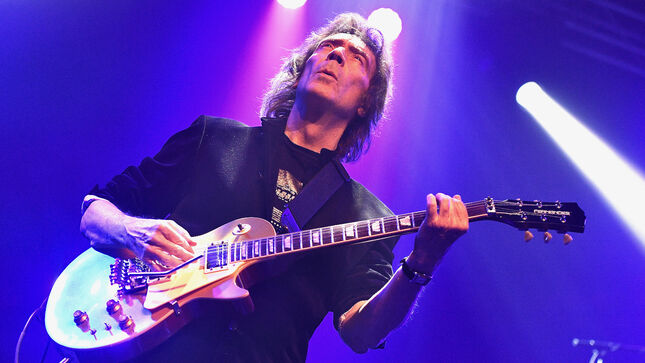 In this month’s column, Steve Hackett discusses his Seconds Out + More! Tour (which will be hitting North America next spring), his favorite work with Genesis, and future plans.

How did the idea to perform Seconds Out in its entirety come to be?

“After the success of Selling England By The Pound Live, I knew Seconds Out was also a favorite for Genesis fans. Plus, my band were very enthusiastic about the idea of playing it.”

Which tracks are you looking forward to performing the most and why?

“I always love playing the guitar solo in ‘Firth Of Fifth’ and it’s wonderful to play the epic ‘Supper’s Ready’.”

Seconds Out was recorded on one of Genesis’ first tours after the exit of Peter Gabriel. At the time, were you concerned or were you confident with the band carrying on as Phil Collins as the lead vocalist?

“Seconds Out was recorded on the second tour after Peter left. By the time Phil became the singer, we were no longer worried as he was so obviously great in the front man role.”

What are your thoughts on the term “prog rock”?

“It covers a wide range of styles...constantly evolving and appeals to an intelligent audience.”

What is your favorite Genesis album that you played on, and why?

“My favorite is Selling England By The Pound. I love it for its wealth of ideas and its breadth of sound and genres.”

What are your thoughts on Genesis continuing to play shows, despite Phil Collins’ health problems?

“Genesis’ material always works live and people are enjoying the shows. I wish them every success.”

Future plans beyond this tour?

“We’re touring the world again now, and I intend to continue. It feels terrific to be back in the saddle with such great audience response and fronting a fantastic band.”

BETWEEN A ROCK AND A PROG PLACE NEWS BLAST

Mandoki Soulmates (an all-star prog outfit featuring contributions by Ian Anderson, Jack Bruce, and Tony Carey among others, and led by Hungarian singer, drummer, songwriter, and producer Leslie Mandoki) has issued a new video, ‘The Torch,’ which can be viewed below. The song comes from their recently-released album, Utopia For Realists: Hungarian Pictures. Although Finnish folk metallists Korpiklaani released their 11th studio album Jylhä way back in February, drummer Samuli Mikkonen is now featured on a drum playthrough for the song “Mylly.” And another prog artist has released a new video, Jinjer, for their tune ‘Disclosure’.

The Moody Blues’ John Lodge has issued his latest single/video from his new live album, The Royal Affair and After, entitled ‘Gemini Dream’. Italian symphonic metallists Rhapsody Of Fire returned in late November with their latest album, Glory for Salvation, and have issued a new video for "Chains of Destiny".

The Flower Kings have announced the release of their 15th studio album By Royal Decree, set for March 4, 2022. The band have also confirmed the first live dates in support of the album, taking place in Sweden beginning at the end of March 2022.

Just in time for the holiday season, Majestica have issued A Christmas Carol - Extended Version, and unveiled a studio video for the album’s second single “This Christmas,” that you can gaze at below.

Prog legends Jethro Tull return on January 28, 2022 with a brand new album, The Zealot Gene, which can be pre-ordered, and its first video, ‘Shoshana Sleeping,’ can be viewed here. Swedish prog metallists Sabaton recently issued limited-edition, live-in-concert, double-DVD/Blu-Rays, The Great Show and The 20th Anniversary Show, which can indeed be ordered. EPICA have issued many different configurations of their latest offering, Ωmega Alive – you can decide which format best suits your needs here. Blind Guardian have unveiled a new 7” EP, Deliver Us from Evil, which also can be ordered (while their next full-length is slated for release in September 2022).

New York progressive metal act October Thorns recently paid tribute to bassist David Z (who was tragically killed in a vehicle crash while on tour with Adrenaline Mob in 2017) with ‘Circle Game’ single, which can be heard here. Saudi instrumental prog metallists Dusk have issued a sophomore EP, To Where I Belong, and the title track is available for listening. Symphonic metallists Temperance have released a music video for the title track off their latest album, Diamanti.

French proggers Lalu have announced that their next album, Paint the Sky, will be released on January 21, 2022, and you can watch the video for The Chosen Ones - featuring Jordan Rudess (Dream Theater) and Simone Mularoni (DGM) below. Extreme progressive metal unit Persefone is set to release their Napalm Records debut, metanoia, on February 4, 2022, and the video for the first single, “Markabah,” is already viewable. Symphonic melodic death metallists Aephanemer have issued a lyric video for their ditty "Le Radeau de La Méduse" - off their new album, A Dream Of Wilderness.

Although this space is usually reserved for a vintage clip…how about we break away from it for this month? And it’s for good reason - one of Canada’s most promising prog acts, the two-man band Crown Lands recently performed an hour-long virtual concert for LouderSound, which was issued this month on vinyl and can be purchased via this link. But, the duo were kind enough to post the audio and video on YouTube of the entire performance here, for all to enjoy. Thank you, lads!