CHEAP TRICK – “We Didn’t Want To Be A Canadian Band Or FOREIGNER Or AEROSMITH... We Laughed At Almost Everything"

Bang Zoom Crazy... Hello, indeed. Rockford, Illinois classic rockers Cheap Trick are having a heck of a year, returning with their first album in seven years, issued just as the band found themselves inducted into the Rock And Roll Hall Of Fame, along with BraveWords favourites Deep Purple and a few others we don’t care about.

We caught up with guitarist Rick Nielsen and bassist Tom Petersson one afternoon in the Pantages Hotel in downtown Toronto. Zooming around doing press since 7:00 AM on no food, Rick and Tom had been running on fumes, and yet keeping up with their quick minds took a bit of effort, partly, though, due to the beers graciously being plied to myself and three other press buddies by Ron, Charlotte and the band’s label Big Machine.

And so a question about that curious title quickly went off the rails, which makes sense, given how off the rails this record title goes all on its own.

“Well, that was a title Rick had,” begins Petersson, “a working title for a song that ended up on the record, ‘Long Time No See Ya.’ And Robin (Zander; the band is completed by drummer Daxx Nielsen, yes, Rick’s son!) liked the title, and he suggested us using it as an album title. But we usually use one of the song titles as the title of the record because you can’t think of anything else.”

“You know, Dream Police, that worked,” adds Rick. “It was like, oh boy, the song, you can work into a concept, blah blah blah. Anyway, a lot of them, it’s kind of a stretch. Let’s see, how can we turn this into meaning more than it means? But ‘Long Time No See Ya,’ it turned into that. And then we had the four impact words: bang, zoom, crazy, hello, which, you know, what does each one mean? It’s like, just impact. You say bang... what?!”

Is it how swift life goes by?

At this point Rick fishes around in his pockets to provide for me a full set of the four. Apparently, he’d been tossing them out all day, whilst getting spotted in the street for numerous selfies.

“Oh good, there’s all of them—there’s zoom. I’m going to sell them to you.
You know, it’s like, hello? You can’t say, well, that’s Rick, that’s this, or that’s the songs, or that’s the retrospect, well, here we are starting over. It’s like, what does it mean to you? They’re impact words that can either mean a whole bunch or nothing.” 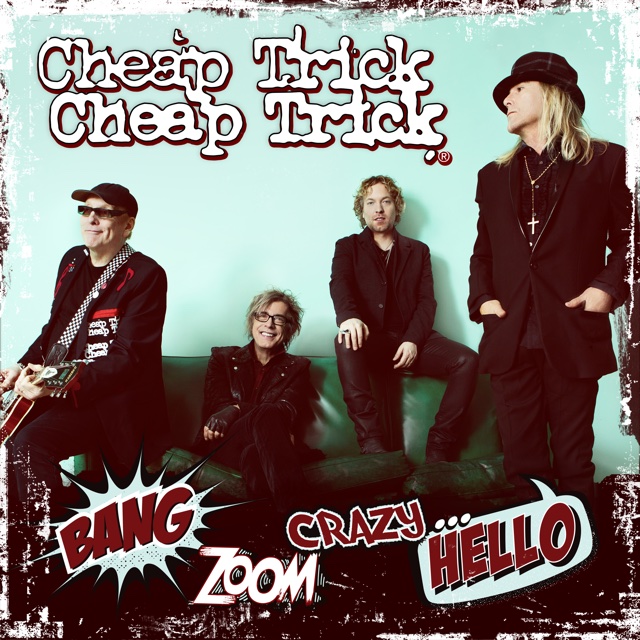 Do you arrive at the last one, hello, in your 60s?

“Yeah, why not? Yeah, we did a song a couple years ago, ‘Welcome to the World.’ I wrote it for my first grandkid. But not lovey-dovey, I love you, and all that kind of stuff: ‘Welcome to the world, it’s a brand-new day, it’s a better place.’ Since you’re here. What is he talking about? Are you talking about the fans? Sometimes you have to make a little stretch. But it’s like, it’s better than just typical love songs. Or, you listen to the lyrics on the opening song, ‘Heart on the Line:’ ‘My heart’s playing bumper pool, silly game, one thing led to another.’ Bang, well, with anything, ‘Then I took a shot, my heart was on the line, I was working overtime, then along came a beat, knocked me off my feet.’ I’m trying to remember... ‘My heart was on the line.’ It’s kind of dumb, but it’s kind of not dumb. It’s prophetic compared to a lot of songs. But, you know, we don’t say ‘rock ‘n’ roll’ too much.”

And that’s the magic of Cheap Trick: smart, sometimes oblique songs lyrically, sugared with Beatles pop, cooked up raucous like The Who, which can describe almost everything on this very focused record.

“It seems like a continuation,” notes Petersson, asked about the band’s production, always lively, and this time sod-bustingly aided and abetted by Daxx and his drastic drums. “I don’t see it as that much different than the last few albums. Our producer, Julian Raymond, understands us. We’ve been working with him for several years, many years. He understands it, and he kind of brings out the best in us. And he’s into the same kind of thing as us. It’s always a combination of the Beatles, the Stones, Slade, T Rex; it kind of goes all over the place. Punk. It’s just got all these different elements to it. We do whatever we think is right for the songs. Someone just asked me, ‘Oh, how would you describe your bass sound?’ Well, it’s different on every song. It depends on what the song is. I don’t want the same sound on ‘Voices’ that I do on ‘Sick Man in Europe’ or ‘Auf Wiedersehen.’

“The song dictates almost everything,” adds Rick, “how it’s sung, how it’s played, the tempo, the bass, the solo, everything.”

“Yeah, a certain bass sound may be cool for you personally,” laughs Tom. “‘Yeah, I’m gonna use this great bass sound on every song! I’m gonna play everything! Yeah, and me and my bass buddies will be like, cool!’

Rick: “Billy Sheehan—we can out-do him!”

Tom: “And it doesn’t fit. So it’s laid-back if it needs it, and so I’ll just do something real simple. Like, what did I play on ‘The Flame,’ for example? Nothing? Maybe I should hear it more often (laughs).”

Lead single on the album is the hypnotic “When I Wake Up Tomorrow,” which feels almost random, set against five or more other potential singles on the album. Not that it matters... for a number of reasons.

Says Rick, “’When I Wake Up Tomorrow,’ like the first time I heard that, when Robin brought the thing into the room, we played it a hundred times from F to E minor and boy, the way it was played, it just sounded... it was an orchestra of silence and space.” 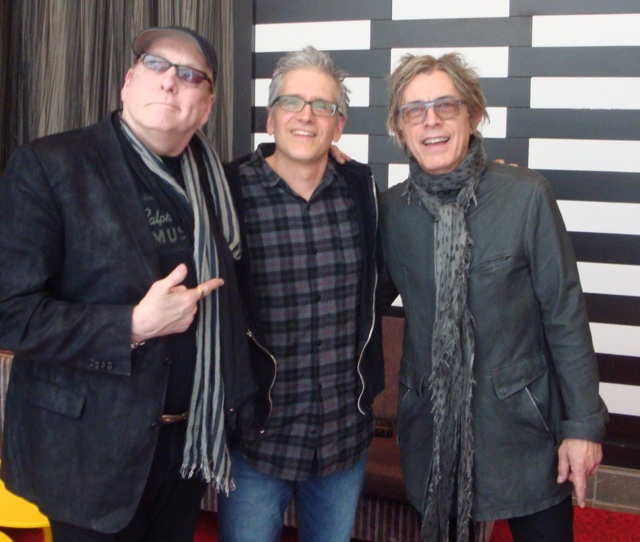 “It’s simple,” adds Tom, “but it doesn’t go where you think it’s supposed to go, even to the point where we get confused ourselves. It’s like, oh, we’re going to go wrong here. It sounds much simpler than it really is. And there’s really nothing going on. Same thing, I didn’t really play much. I kind of knew what I played in there, but it’s just single, simple notes—that works for that song.”

On the subject of picking singles from such an embarrassment of riches, Rick says the guys have no idea what should be made into a little 45 RPM record and what shouldn’t. “We don’t. We’ve had so much trouble with that throughout our whole career. People say, ‘Oh, I like this one, I like that one. This one’s neat. I want to start the whole album over.’ ‘Well, we can’t decide what to have as a single—we’re not going to have any.’ ‘What?! You can’t expect people to listen to everything.’ It’s like, what song do you think is more important?”

“I mean, we’re not the ones to do that,” agrees Tom. “We’re out there promoting an album now, but we’re not the ones in the business of selling the record. That’s the record label. That’s where Scott Borchetta comes in. And even the producer would have a better voice on that kind of thing. All four of us have a different idea about it. I don’t know if all four of us would’ve picked ‘When I Wake Up Tomorrow.’ Not that we don’t like it. What is radio? Who’s it for? I don’t know, are we trying to sell this to people that like Britney Spears or Beyoncé or Bieber? Who is it?”

Rick: “Who wants to hear us? That’s their job.”

“So I don’t even know what the market is,” continues Tom. “I personally don’t listen to the radio. I can’t stand it. And we don’t write with that in mind, ever. We don’t put the record together like that. We didn’t know the single was ‘When I Wake Up Tomorrow.’ We were doing a photo shoot for the cover, and at the very end, we were doing this thing where we were rolling along. We had a rolling camera where they were gonna walk slow, and they were going to film something for these shots. And right during it, the guy who’s filming it goes, ‘Wow, I hope this song is the single; this would make a great video!’ ‘No Direction Home’ or something was playing in the background. It’s like, uh... get a hold of Scott real quick, like, ‘What’s the single gonna be?’ We had no idea. ‘When I Wake Up Tomorrow.’ ‘Okay, put that on.’ So we put that on in the background, and we kept walking, and in some 30 minutes we were done, and we had the video from the photo shoot. ‘What’s our single?’ ‘I don’t know.’ ‘But that seems like a good idea. Can we shoot the video now?’ And so it’s like one of those things.”

“Yeah, so again, it’s not planned out, it takes on its own life,” reflects Tom. “It’s like, well, that’s cool. Everything’s all-natural, or as natural as we can make it. I don’t think any of us consider that we’re actually in the music business. We’re musicians. We have nothing really to do with the business. It’s like the most cutthroat business, probably on earth. And it’s craziness. It’s just not something we do.”

“We just did Jonesy’s Jukebox, Steve Jones, Pistols,” laughs Rick. “We’ve known him forever, never see him, really, and it’s like, I had to think about it, how many record did they have? They only had one album. And he’s talking about the Rock and Roll Hall of Fame, and saying, ‘We just left our shit there; we didn’t even go—fuck them.’ And he says, ‘Yeah, I tell ya, I was shooting junk in London and I used to listen to Cheap Trick and Journey.’ And I go, ‘What?!’ This is a guy from the Sex Pistols. It’s cool he liked us; Journey... they had good anthems, good songs—he likes melody. And as crass as it is, you think about it, I thought they did more records! You know, we loved the first record. I mean, it wasn’t just that we liked it because it was crummy. It was cool, it had attitude.” 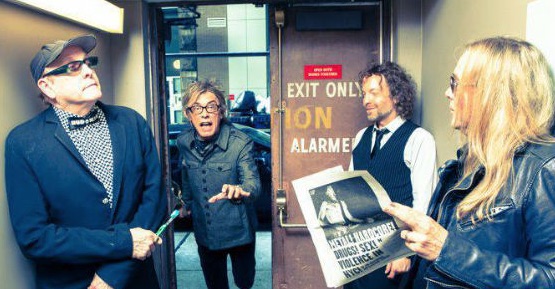 “Great, oh, brilliant. I don’t know what they could’ve followed that up with. Nothing! Nothing, especially with their whole look and the whole thing that just made people crazy. And the happy song about abortion. Wow! Bo oh boy, this is some cool shit they got going here.”

Rick: “We liked it, but you know, we weren’t saying, ‘We better get some safety pins.’”

Tom: “Better take our disco suits off and put some safety pins on.”