CRISIX - Healing The World With Mosh 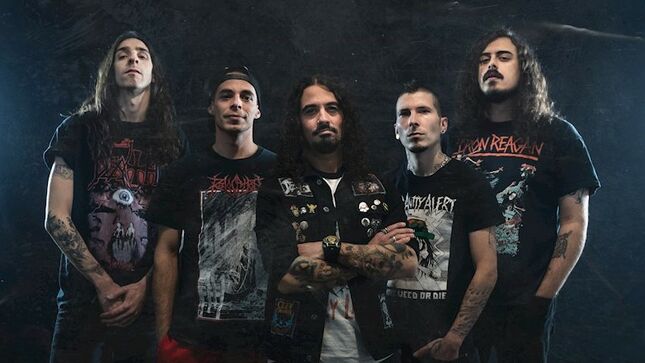 Crisix just may be the unsung heroes at the head of the new wave of thrash metal, and the uncrowned flag bearers of Spain’s bubbling heavy metal scene.

The Barcelona based demolition artists have put their collective foot on the proverbial gas during the pandemic, for a ridiculous output of music, branding like no one’s business (Crisix pizza and beer anyone?!) and level-up status as the heir-apparent to the global thrash crown.

Bassist Pla Vinseiro caught up with BraveWords for a deep dive into their new album Full HD (out April 15th through Listenable Records), collaboration with the best of the new wave of thrash metal movement (“W.N.M United”), growing in Spain and beyond, and healing the world with mosh!

BraveWords: You guys have been so active throughout the pandemic. Just nonstop. A lot of bands have taken time to recharge from the road or get back in the studio. But you've managed to cram so much into this span of time. It's absolutely crazy.

Pla: “I mean, that was the idea, you know? Because the pandemic thing got us in the midst of kind of the greatest year for the band. And it was like, ‘No, fuck it. We will just find a way to reach people with whatever we can do’. And I think it turned out great. Yeah, we could have stopped, but it wasn't in us. We just needed to keep going.”

BraveWords: I really dig what you guys are doing here, some of the ways you guys have been branching out in recent years with the cookbook, the pizza, the beer. You guys are branding like crazy. And I think that's awesome because there are so many bands, particularly in heavy metal, that just want to play shows. They could put out the best album possible, but if you're not out there, if you're not in people's faces, it's a crowded marketplace. You have to compete and you guys are definitely pushing your brand.

Pla: “Yeah, thank you. I mean, we just love to do things a bit different sometimes. And now it's more than music. If you want to get to people and you can't even play live shows, what are you going to do?” 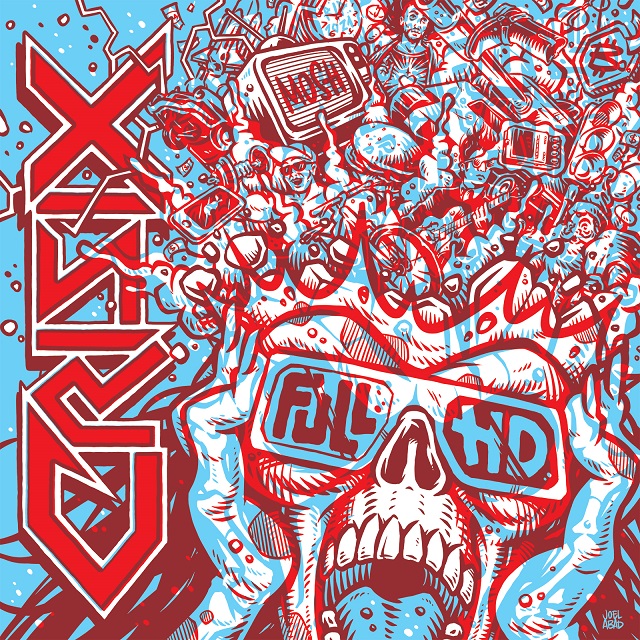 BraveWords: Your output for actual music has been crazy these past four years. Three albums and an EP. Has it kind of been a conscious decision that when you guys have material ready to go, you're going for it? You're not staggering things out. You're going to keep the momentum going.

Pla: “Yeah, that's what you got to do when you come to this mindset of this band is the center of my life, this is where I will develop all these crazy ideas with my friends and everything. What else do you want to do, man? Just get your ass to fucking rehearsal and write some songs, just fucking play. And it's this mood. You know how many ideas we got there just hanging in waiting for the moment. But yeah, it's always in our minds that we gotta keep going, keep offering everything because we've got a lot to offer I think and the ideas never end.

“We didn't plan the EP, the EP just came to us. And then from the EP, the cookbook, the pizza, the sauces, the game, everything just came naturally during this horrible moment where we couldn't play and we just had to put our psycho minds into something. So it was just too much riffs. This was the original problem. Too many riffs, too many songs. So what do we do? Okay, let's do an EP. OK Let's do a crazy culinary EP. OK, let's do a cookbook and you connect the points and this is how it ends.”

BraveWords: There's so much to be said about this kind of new wave of thrash that you guys are part of. I think about the single “W.N.M United” and it really kind of hammered that home to me. There's so many fucking awesome thrash bands worldwide right now.

Pla: “Yeah! I mean, in the end that was the main goal. We were talking about this for some time now. We wanted to do something like this because Crisix came by during this original new wave of thrash era, but we were not the first. When the band was writing the songs, they were already hearing the first record from Violator, the first record from Evile. All these bands, we felt them as part of our generation. But you know, this music was around when the Crisix sound began to take form. So this made a lot of sense to us now that OK, now after pandemic thrash is the answer to all this evil that is inside of us because it's contact. Moshing is contact, you know?

“We were in rehearsal. We were like, ‘Yeah, mosh is fucking love. Mosh is the answer’. And then it gave me the idea. Just call some friends. Everybody was super into it. It was kind of easy. Then we even got Chuck Billy, who was super nice and was also part of the video. So everything came out great. And we just want this to be this reminder to everyone that the new wave of thrash is here, it's alive and it's kicking and it's time to take the venues back. That's the idea.”

BraveWords: I loved in the beginning of the video when you guys had Chuck and it was almost like this deity or this overlord of thrash sending you down to find these other thrashers.

Pla: “In the end, it's like fan fiction done by these thrashers. It's like ‘Yeah, that Chuck BIlly is the galactic chief!’ We don't care, man. We just do this stuff and we're laughing and having the greatest time.” 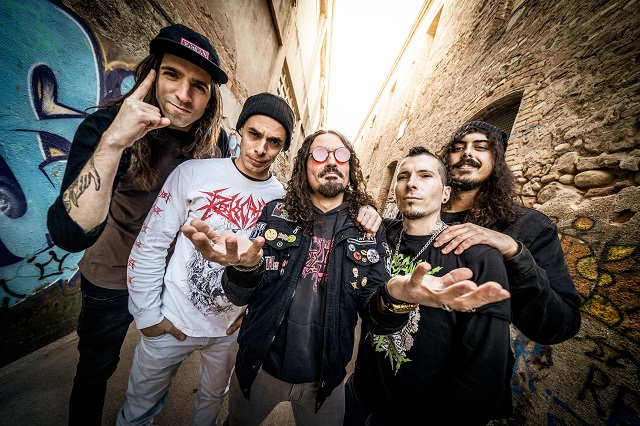 BraveWords: That's one thing I like about this record in particular. It's not just straight up thrash. You guys have a ton of different stuff going on here. There's heavier, almost death metal influences. You got some Municipal Waste almost comedy elements in different spots. It's really all over the map and you're getting a ton of your different influences in this record, and it's not copy and paste.

Pla: “I think it’s part of the DNA in Crisix to be a colorful thrash band. It’s a thrash band before everything else, but it's a colorful one. We all love punk so much. We listen to a lot of different punk styles and bands, new and old. We love heavy metal. We have this funky part in a song. We just put these little pieces over the thrash thing and we really have a great time with that.

“And with this album I think we really went into all the things that worked out on previous albums and built over it. But absolutely, death metal is a part of the band and the lighter elements like more comedy kind of register. It's a fundamental part of this band. We may sometimes go more serious. We may get a bit more of a modern thrash kind of feeling. But the old school and the funny side of Crisix, I think it's just one of the most important parts of it.”

BraveWords: It feels like it's taken a while, and I could be totally off on this being in North America, for a band to really rise up to be the flag bearer for metal in Spain. It feels like you guys are really on the cusp of doing that. For you personally, does it feel like there is almost this void for a band to come up and be the big international metal band representing Spain?

Pla: “Yes. You know, for Crisix it was always like we are not aiming for Spain ... Crisix was always the band that we just wanted to go. We just want to tour outside. In a way, even if the band got big in Spain, the band was always striving for this outer part of the scene out of Spain. And I think it's not really what you usually see in the Spanish scene. We've been a bit out of the global scene. Maybe if you go into more underground stuff, there's always people that are coming and going, but there was never this band yet, an English speaking Spanish band that would go to all the main festivals that would represent the Spanish scene. And of course we would love to reach this. I mean, we're breaking a lot of barriers here. But Crisix always wanted to take the world by storm.”

Pla: “I feel a lot of pride and a lot of support everywhere I go here in Spain. You know, you will always have people that don't like you and it's part of it. It's part of life. But I think people really understand in Spain what we are trying to do, and they understand how hard it is, how we are crossing to these unexplored parts for the older Spanish fans. And I don't see a problem, really.

“Sometimes it would be so much easier for this band to just stay in Spain for a while. This is like the easy route, really, I can tell you. But we always take the decision to go farther and reach new places, and I think a lot of people really understand this about Crisix. I don't see a problem.” 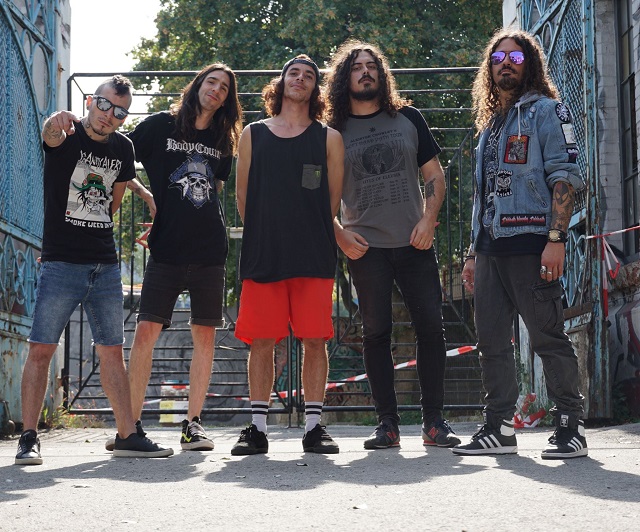 BraveWords: Obviously there's a ton of influences we can feel on this record. But for you coming up as a young man, was there a particular band or album that really drew you into heavy metal?

“But after that and coming into metal, I think for me Rust in Peace by Megadeth was the album, because it had all these little jazzy passing notes and a bit of progressive structures that really let me into the more aggressive sound because I think the prog part of it was kind of a bridge for me to go into the aggressive. I would say Rust in Peace is maybe the album that I listened to the most, maybe that and also Kreator. I got into Kreator, when I went into the more and more aggressive thrash. And it was all Pleasure to Kill, Extreme Aggression. I love that stuff too.”

BraveWords: It really feels like momentum is on your side now. You rode this wave of the pandemic. You're playing some of the biggest shows of your career. Are you guys feeling that momentum now? Is it like, ‘OK, we're getting ready to level up here’?

“I remember the other day in Eindhoven in Dynamo, which was one of the first places where Exodus played when they came to Europe. So there's a lot of old school guys there when thrash came to Europe and some of these guys were like ‘man, this is my first show in two years. But the best part is I've never been to this kind of energy thrash show since I was here in 87 seeing Exodus!’ And this kind of stuff, how you come back home feeling. It's not about ego, but just about man. If this guy that was there felt that again, we are onto something right now.

“People just have a lot of fun at our shows. They go out and they are smiling. I'm 100 percent sure that we have something going on, but not because I think high of myself or anything. It's just what I see in people after the show, how they feel. They just feel great. And yeah, I think we've got some momentum going.”