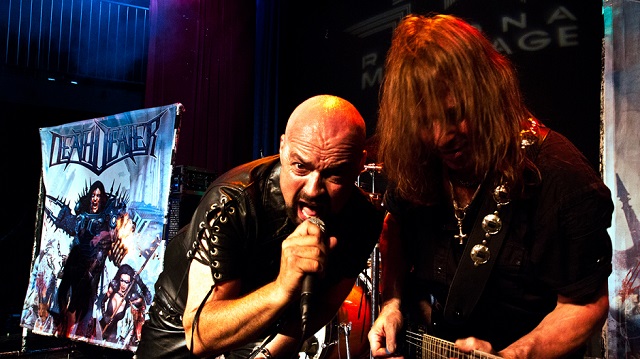 The ever personable and screamster Peck explains, “We released three singles for this album and that’s all you’ll be able to hear digitally. Once the album is out, you can’t just click a button, push play and listen to it. You won’t be able to download the album; the only way is to buy the CD or vinyl. You can go on Armored Saint’s homepage and right there you can listen to their new album (Punching The Sky) and I just don’t get it. There’s no link to buy the album or purchase a t-shirt.”

It’s a clear business sense to gain value out of their work and more importantly, the music must deliver the goods. Conquered Lands is ripping metal complete with stellar guitar work from Ross The Boss and Marshall and the most interesting aspect is 80 percent of the album was written 4 years ago.

“Two Death Dealer albums are on the horizon! The fourth one is already done and we have ten songs ready for the fifth one, so I had to get my mind back into the zone for Conquered Lands and I was listening back to the songs and I was like, ‘man, this record is really fucking good’,” laughs Peck. 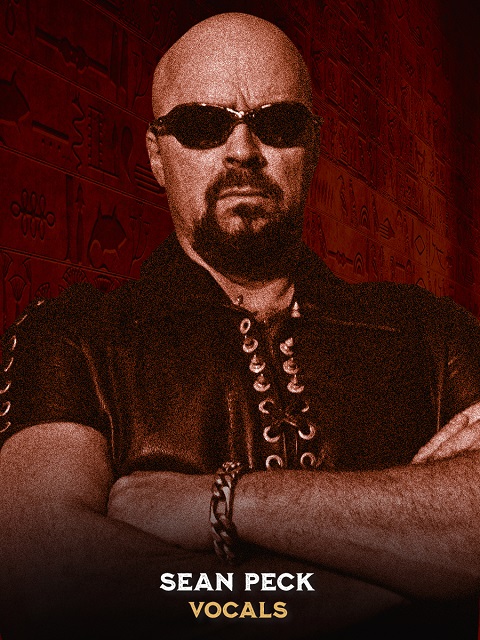 Added to the lineup for Conquered Lands and mostly known for his work with Symphony X, is bassist Mike LePond.

As Peck divulges, “Well, when we built Death Dealer, I wanted it to be an actual band, not some one-off supergroup that records an album and then disappears. We would play shows together, build the band and that’s exactly what’s happened. We’ve had the same lineup for a while, but Mike is awesome and has been a great addition to the fold. Once things can get going again, we will play shows.”

With the world being thrown topsy-turvy due to Covid-19, there was no set backs to the recordings being finished and as Peck reveals, the guys in Death Dealer always work on their songs through online means.

“We usually record over the internet anyways,” he explains. We each live in different parts of the world and we’ll get on camera and work out the parts that way. It’s not like Stu sends me a guitar file and I listen to it; we work out the tracks together and make a song out of it.”

“Running With The Wolves” features one of the more amusing lines, “Don’t bring your girlfriend, or you’ll leave alone.” Peck dives into that ‘80s metal mindset for this track.

“That’s unleashing my sleazy side,” he laughs. “I just wanted to write a fun, heavy metal song. I have all these sleazy type lyrics for songs, but the guys in the band are like ‘no, man, you can’t write that.’ I have all this stuff that could make for a Steel Panther song. I could have a solo album with these type of songs.”

In these turbulent, divisive times, especially in the United States, “Every Nation” calls for unity through the power of metal.

Peck agrees, “I wrote that song 4 years ago, it was just about what if everyone in the world was a metalhead? I had no idea there would be all this division in 2020, but call me Nostradamus. If I’m at the grocery store and I see someone with a Judas Priest t-shirt on, I’ll call out to you and flash the horns. It doesn’t matter what your background is, metal is the great unifier. And the lyric video is set up with these propaganda posters with metal images on it. We were trying to figure out what to do with this thing, how to present it to the public and it came out great. Metal and music unites everybody and that’s why I don’t talk politics on my social media pages because all that does is divide people.”

“22 Gone” takes a different turn and presents itself as a ballad, but with dark subject matter.

“It’s a very deep song,” he remarks. “Ross said ‘it’s the most depressing song in heavy metal history.’ I saw something that said 22 soldiers commit suicide every day and I took that and made a song out of it. I’m very proud of those lyrics.”

The cover art features this zombie pharaoh type creature on the cover. Peck is highly involved in the creation and ideas behind the art, mostly due in his interest in comic books. Opening track, “Sorcerer Supreme”, is about the Marvel character Dr. Strange.

Peck dives inside the cover art, “The artist is Dusan Markovic and we got a killer cover out of him! He doesn’t do Egyptian designs and I like getting something different and go out of their comfort zone, but he did a killer with this and it looks killer on the vinyl.”

Besides Death Dealer, Peck is involved in numerous other bands including Cage, The Three Tremors with Tim “Ripper” Owens and Harry Conklin, and fronted Denner / Sherman, which featured both Mercyful Fate guitarists Michael Denner and Hank Sherman.

Peck has been working nonstop and is working on new Cage music, a new The Three Tremors record and a special project with former Mercyful Fate/King Diamond members.

“I can’t say all the info,” Peck teases, “but you’ll be blown away once it’s revealed and shown to the world.”