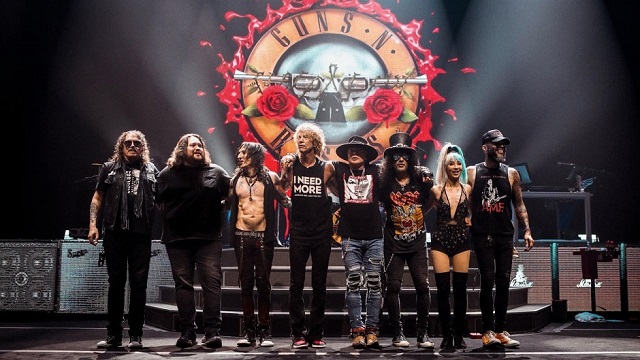 It’s been five years since three founding members of Guns N’ Roses resurrected the band and started trekking the world’s stages in what was called the “Not On this Lifetime” Tour, and this past weekend South Florida had the opportunity to host not one, but the last two consecutive nights of the “Guns N’ Roses Are F’N’ Back 2021 US Tour”, a massive tour production that started on July 31. These tour dates came with an enticing perk: Wolfgang Van Halen’s band Mammoth WVH made their live debut as they were chosen to open for the mighty GnR.

Despite being Sunday the second night, the theater was filling up with concertgoers at a steady pace, a multitude of them dressed up in red bandanas, blonde mullet wigs, wrapped themselves in flags, wearing bullet belts, and any other imaginable way to pay homage to a band that definitely stamped the rock n’ roll sound of the late ‘80s and early ‘90s with an indelible mark. But before incombustible front-man Axl Rose, guitarist extraordinaire Slash and bassist Duff McKagan took the stage, we were treated to a delightfully crafted modern-rock appetizer via Mammoth WVH’s performance. 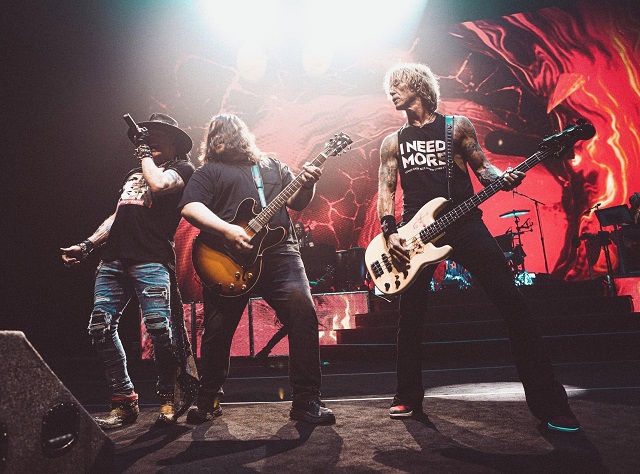 Now, there’s no definitive answer as to whether talent is inherited or learnt. Our DNA is pretty much like a software which has all the codes written for smooth working. Talent as such it's a collection of characters, and while certain skills might have a genetic component, I don’t believe one is going to be good at something just because their father is. Some people are born with greater potential, but without hard work and practicing their talent will come to nothing.

Wolfgang Van Halen is arguably the best case-study of above. A 30-year-old multi-instrumentalist who recently released his lauded debut album under the Mammoth WVH moniker, Wolfie is hell-bent on a task of making a name for himself, even if being the only son of a legend – a man who changed rock guitar forever, and who’s band became America’s answer to Led Zeppelin – will always be attached to anything he does via his unique last name. Many would argue that such ancestor’s royal cognomen – and undeniable place in the history of music – is the key to open many doors, yet they forget the bitter side of that equation: Being a son of a famous musician, and trying to make a career as one, also brings an almost insuperable – and certainly unfair – challenge: almost as second nature you’ll be compared, judged and measured against your predecessor’s achievements.

Fortunately for those in the audience like this writer, who certainly has never expected anything from Mammoth WVH that remotely sounds like Van Halen, Wolfie’s compositions consciously steer away from riding on his father’s coattails, and having the courage to forge his own path – let’s make it clear one more time, he’s not f**ing playing ‘Panama’ for anyone – is what made his debut record so fresh, dynamic, emotionally charged and plainly rocking for my ears. But honestly, I wasn’t expecting the live presentation of the Mammoth WVH to be so bloody good. And believe me when I say, it was revealing. 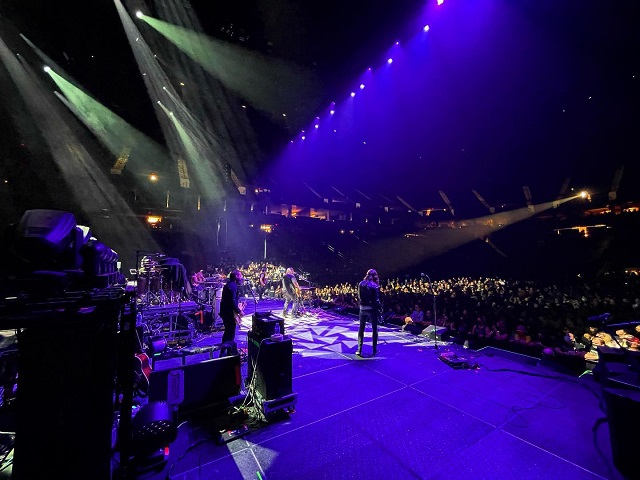 Wolf and company took the stage amidst a roaring ovation, as aforementioned it was the second night in a row at the Hard Rock Live Event Center, but also the last show of the Guns N’ Roses 2021 tour. Without much hesitation they launched into the blistering and layered “Don’t Back Down,” a cleverly chosen opened that categorically set the tone of their entire set. Now, if you’ve listened to the album – and if you haven’t, what’s wrong with you – it’s no secret it exudes freshness and heaviness, with grunge and pop elements sprinkled throughout. However, the arrangements of this songs for the live setting are certainly much more compelling, the muscular guitar tone between Wolfgang’s leads and the rhythm guitar playing of both Jon Jourdan and Frank Sidoris taking the spotlight, while the bassist Ronnie Ficarro and drummer Garret Whitlock held the backbone rhythm section tastefully and precisely. In numerous occasions the guitar riffs emanating from Wolf’s guitar reminded me of Jerry Cantrell’s style, but with an added flavor that felt familiar yet diverse, topped off with his melodic and pleasing singing. The catchy hooks, uplifting and infectious melodies of cuts like “Horribly Right,” “Mammoth,” and “Think it Over” – which Wolfie introduced as his dad’s favorite song from the record – sounded colossal and somehow drenched in a grandeur aura, one that climaxed with “Epiphany,” whose middle guitar section, seamlessly executed by Wolfie definitely resembles Eddie Van Halen’s technique; the poignant and heartfelt “Distance,” and the six-minute guitar work-out of “Stone” which served as the picture-perfect set closer.

With set that unquestionably flew too fast, Mammoth WVH’s presentation radiated professional sheen, virtuosity and a rewarding sense of energy, and was the live testament to the sound of a young musician carving his own career path. The future is bright for Wolfie, and we are absolutely along for the ride with him.

After the electrifying musical spell described above, the scene was set for Axl and company to bring us back in time. And while they took almost another hour to step in front of the crowd, when they did, it was a sight to behold. I mean, it’s effing Guns N’ Roses we are talking about here, what else could we expect? Since the first note broke into the airwaves, anyone in attendance was reminded as to why this band ruled the rock scene in their heyday. Sporting a sense of camaraderie on stage that most likely has solidified through the course of the last 6 years touring together, Axl, Slash and Duff truly seemed to be enjoying themselves, overpowering the thunderous cheers coming from the audience with the opening salvo “It’s so Easy.” Axl’s voice sounded a little muffle during the first part of the track, but kicked into normal gear half-way through it, getting even stronger as the 2 and half hour set progressed. 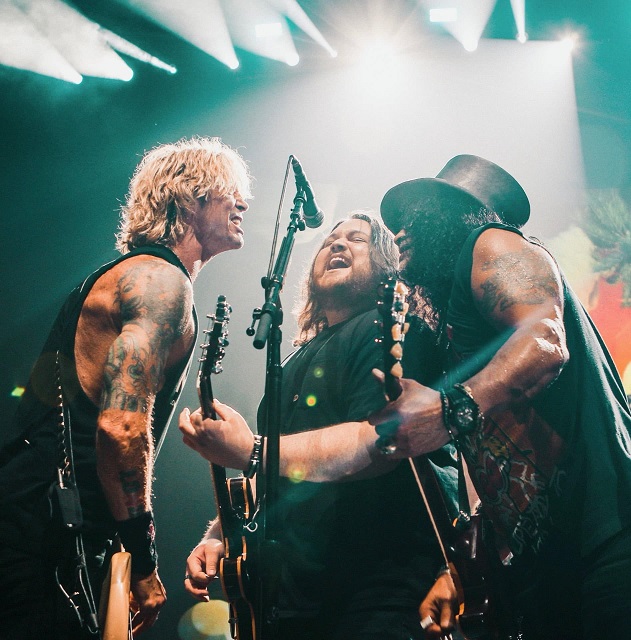 The 29 songs setlist had something for every fan, even those who followed Slash and Duff short-lived band Velvet Revolver, present with the excellent “Slither,” or those who liked the band’s infamous “Chinese Democracy” record, also represented with its titled track. Besides tearing up staples like “Mr. Brownstone,” “You Could Be Mine,” “Nightrain,” “Sweet Child O’ Mine” and “Welcome To The Jungle” - which Slash teased by playing the initial chords standing on the drum riser, causing almost every soul to stand up and sing at the top of their lungs – there were some highlights spread throughout: a courageous rendition of the Soundgarden’s iconic “Black Hole Sun,” never played before in the tour, and where Axl had to stretch out his upper register; a blistering rendition of The Stooges’ “I Wanna Be Your Dog” classily sang by McKagan, a slightly modified version of “Civil War” with an outro comprised by Jimi Hendrix's classic "Voodoo Child ( Slight Return)," a spotlight-stealing guitar solo by Slash where he revered the legacy of the Chicago blues legend Muddy Waters by playing “Mannish Boy,” and the energetic cover of The Who’s “The Seeker” as part of an extended encore also including a breathtaking execution of “Coma.”

Nonetheless the utter highlight of the night came when Wolfgang Van Halen jumped on stage – for the second consecutive night – to play guitars and sing alongside Slash and McKagan at the rhythm of the evening’s closing track and the greatest hit Guns N’ Roses ever composed: “Paradise City”. It felt like a meant-to-be moment: the synergy of past and present colliding in time, seasoned and veteran rock 'n’ roll stars sharing stage with an up-and-coming musician who honors the legacy of his father by defying stereotypes and putting out music from his heart. We witnessed a truly remarkable evening of music, topped-off in true unforgettable fashion with that history-worthy jam. Certainly one to add to the list of the best ever live performances I’ve been to.