Happy 60th VENOM’s Cronos - We Wanted To Be "Heavier Than KISS, Heavier Than MOTÖRHEAD And More Satanic Than BLACK SABBATH"

Legendary Venom frontman Cronos (real name Conrad Thomas Lant) turned 60 yesterday (January 15th, 1963) and to celebrate the occasion we are dusting off a classic interview we did on 70000 Tons Of Metal 2015! Nobody shoved metal up our ass like the Newcastle Upon Tyne trio rounded off by Jeffrey “Mantas” Dunn and Anthony “Abaddon” Bray. So you can point the (middle) finger at Welcome To Hell (1981), Black Metal (1982) and At War With Satan (1984) for pushing the music to the extreme and playing a key role in the invention of thrash, death and black metal. Every band in the ‘80s were watching and taking notes. We’re they the greatest players on the planet? Hell no. But they were artists with a vision and a helluva sense of humour that you will see. And looking back at the NWOBHM (New Wave Of British Heavy Metal), they turned heads like none other. Venom milked it for everything that it was worth. But amidst the glory, there was inner turmoil and plenty of music industry bullshit that eventually tore the original band apart. There have been many incarnations of Venom, a Cronos solo career and enough reissues, compilations and live albums to make Satan spew on his throne.

Lay down your soul to the gods rock and roll…

BraveWords: Venom are one of the biggest inspirations in metal, how do you go onstage and deal with that?

Cronos: “This band is about the music, and it's always been about the music. We created something back in the day that I thought was the best of all the bands that I love. It was all the cliches - heavier than KISS, heavier than Motörhead more satanic than Black Sabbath - all these bands that I loved and grew up with, and they just weren't quite extreme enough. Our intention wasn't to make this band special and different than anything else; it was more about creating something that would last, with quality, not just something throw-away. It has to be quality. I just formed the band when everybody told me this music was done. I was a teenager. Everyone told me that rock music was done. I was listening to Deep Purple, Sabbath, Bad Company, Zeppelin - I was in the prime of my life, and I had just left school. I was also a big punk fan as well, and I just wanted to create the music that I love. It wasn't unusual for that time that the bands that were out at that time seemed to be the ones that succeeded because they were playing a style that was already tried and tested. It was tough relating back in the day because people used to say that they couldn't understand what we were playing and singing, and that they were scared because it was so fucking satanic. It was hard. The record companies didn't understand it. It could have quite easily ended very quickly. Luckily, the studio that I worked provided an opportunity to explain that we wanted to put some discs out - that we were serious. If it wasn't for that, I don't think any label would have signed us.” 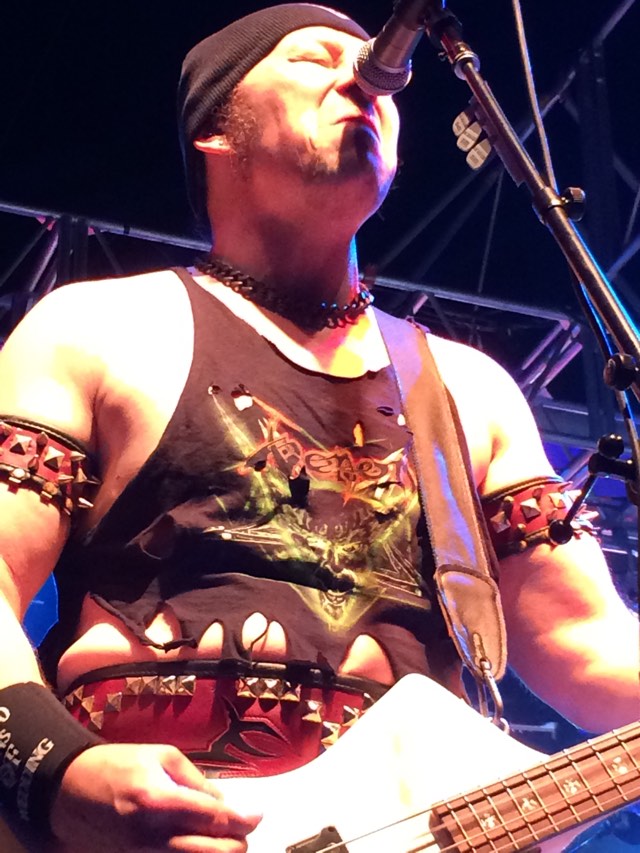 BraveWords: You know what did it for me, being based in Canada? It was the videos. That's what spread the word of Venom. There was a block of one hour dedicated to heavy metal videos.

Cronos: “’Bloodlust' and 'Witching Hour' were the two first videos that we did. The reason we did those was to show promoters what they were going to get for their buck. I mean, why would they take a chance on us when all they had was the album to go off of? So, we decided to stage a show and record two songs to show everyone what Venom is. That was money well spent, and it was all the money we had at that time. Really, it was either make or break. We either pay for this video to get done and maybe make a career out of it, or we'll pack up and get a job as a plumber (laughs). I'm blown away by how inspiring it was to so many bands. In fact, back in the day, I used to say that I wanted a satanic song in every book of hymns in every church - I wanted ten thousand metal songs for every one hymn. Funny thing is, I think my wish came true because there are so many bands now (laughs).”


BraveWords: What kind of inspiration did you get from the ‘60s and ‘70s.

Cronos: “Actually, I was a guitarist. I grew up playing guitar. The bass for me was an accident. I joined Venom - which was called Guillotine at the time - and we were a five piece. We had one gig, and it was literally a week before the gig that the bass player fucked up. I asked one of the session players from the studio I was working at if he would lend me his bass. So, I got the bass and told the other guys in the band that I didn't know how to play the damn thing, but I'd learn the root notes. I plugged it into my Marshall stack and unleashed mayhem... I fell in love with it. After that I really started to look into other bass players and their various styles. I mean, the way I stand now, people are usually reminded of Gene Simmons, but they are all wrong. I've never been a fan of KISS and never really gave a shit about them. The way I stand is from Status Quo (Alan Lancaster).”

BraveWords: I would have said Jack Bruce, but the Status Quo connection makes complete sense. Have you met them?

Cronos: “I almost met them once at a BBC documentary on rock. They were getting in before me but I went to the toilet and when I came back they were gone. I was devastated (laughs). For me, Quo were inspiring not only as musicians, but in their ability to handle the ups and the downs. That, to me, is something I've always wondered - how do you get to such highs from such lows? We can all ride the high, but when your career goes down the toilet how do you keep the drive going? Quo are the literal master of it.”

BraveWords: That's a question for you, then. How do you keep it going? How do you maintain the longevity?

Cronos: “I feel like I would just let everybody down. There are so many people who sing praises. When you meet people like the Dave Grohl's and the Phil Anselmo's who say they bought Venom albums in high school, how the fuck can I let all these people down?”

BraveWords: You couldn't live with that disappointment?

Cronos: “No. Not after hearing so many people tell me they wouldn't be in a band if it wasn't for Venom. That's just great. For me, the satisfaction is the music, but to hear stuff like this keeps you humble - keeps you from getting a big head. You really keep your perspective, and you realize that you do have a responsibility.”

'Black Metal”:  “’Black Metal' is about the Venom live show. That was the original idea behind it. It was describing 'black', being the night, and 'metal' was the power set to explode. That was us onstage. It's kind of what goes on in our minds - creating that mayhem. You know, you have all your other rock bands - your Deep Purple's, etc - and you sit back and tap your feet, and it's great, but we wanted to have people freaking out; people moshing, diving, jumping around and going crazy.”

'Witching Hour”: “I used to read a lot of horror comics as a kid, which was sort of where the inspiration started. But, really, it's about how the church depicts satanism. I wanted to do something based off exactly that ideal the church has of it. It's exactly as the title says - all the witches flying around on their broomsticks and dancing with the devil.”

“Die Hard”: “That's about the legions... the fans. It's about their dedication to the music.”

“Manitou”: “I’m fifth generation Cherokee Indian, so I wanted to write a song about the spirit of the Indians. I wanted to create a song that was a little more about me than just the devil.”

“At War With Satan”: “That song is about a book I've written. I just took the lyrics from the story. It starts kind of where the bible ends, and depicts the war against heaven and hell. I'd really love to finish the book one day. And we were going to set up a show which would have bits of it incorporated and run about two hours long. I'm a big Rush fan, especially 2112... The other thing, from a musicians point of view, I've got thousands of riffs, bass lines, drum beats, and lyrics I've never used, and it was a chance to use up some of this riffage. I thought it would be great to have a song where you have the themes - using a riff there, there, and there - and all these riffs here and here, but they never get repeated. So, as each section leaves, and it moves into another part of the song, you never hear those riffs repeated. So, it just creates something different. For someone hearing that album for the first time, it must be hard to absorb it because there is nothing really to hook onto - as opposed to a commercial song.”

“Possessed”: “It was written at the same time as the Welcome To Hell tracks. It's funny you mentioned 'Manitou' and 'Possessed' as they used to be each other's riffs and lyrics.”

“Live Like An Angel”: “Wow! I co-wrote this with the guitarist. He had a lot of rock songs, like Motörhead and other bands, who kind of write songs about just getting out there and partying. So, 'Angel' is kind of like that, a bit more carefree - going out and getting laid, getting drunk. A party song. Not being so scared to live.”

“In League With Satan”: “I wanted those songs to be controversial - a massive middle-finger at the church. I knew they would fucking hate it and it would scare the living shit out of them. Being a big Sabbath fan, I used to always get frustrated at Ozzy stopping before he had something big to say - so I wanted to take that much further.”

The rejection letter EMI records sent to Venom when they were shopping for a record deal in 1980. 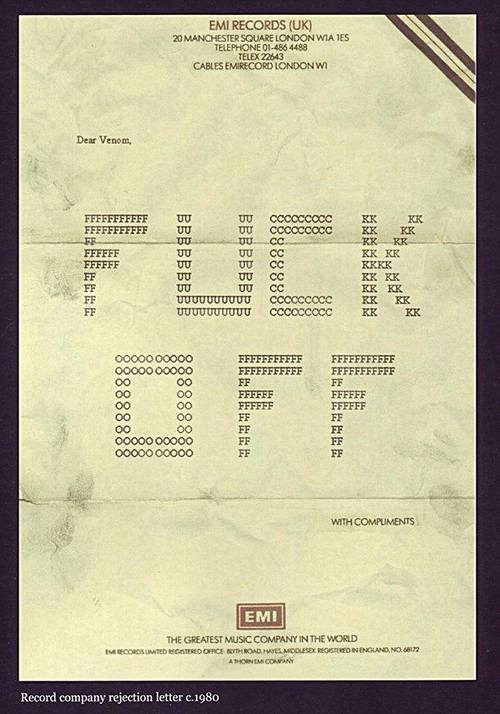