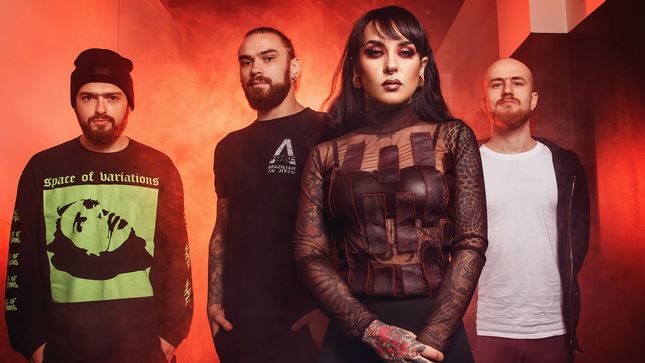 One of the Ukraine’s top metal exports, Jinjer, were set earlier this year to premiere a pro-shot/recorded live performance from Australia as part of the Knotfest.com weekly concert streaming series. But due to a glitch on YouTube, the stream…failed! Which turned out to be a blessing in disguise, because on November 20th, the band – Tatiana Shmailyuk (vocals), Roman Ibramkhalilov (guitars), Eugene Abdiukhanov (bass), and Vladislav Ulasevich (drums) - will release this largely-unseen performance as their first-ever live album, Live from Melbourne. Eugene spoke with BraveWords correspondent Greg Prato about the concert set, as well as Jinjer’s homeland and future plans.

BraveWords: What made the band decide to issue their first-ever live album, Alive In Melbourne?

Eugene Abdukhanov: “We never planned to record the Melbourne show. And the decision was absolutely spontaneous. We decided to record the show during the soundcheck – before the show. It just happened that a few weeks after…the whole world stopped. The pandemic and everything – we know what happened. And we were lucky to have the whole gig in Melbourne recorded – both on video and audio. This content is worth gold now – because there are no more shows. And we had it. But there was a lot of work. The guy who filmed it didn’t want to give us the raw files, and wanted to do the editing himself. And man…it was a real disaster. I spent months working with him – trying to make corrections, trying to make him work in the right way. And it didn’t work. We had a deadline, where we didn’t plan to release that show as a live album – we just wanted to do it as a stream through Knotfest. We had a deadline, and I was extremely stressed out – because the time was coming, and we didn’t have the video. A week before the deadline, he sent me the final copy…and it was impossible to watch. My eyes – literally – ached, while watching it. Somehow, I just persuaded him to give us the raw files – just six days before the deadline! Our friends from Twelve Foot Ninja helped us a lot – they came to his house, took the files on a flash hard drive, then send it to us in parts. There were I think 500 gigabytes of raw material. And in the meantime, we were working hard on the audio, and that went very smooth – because we played well that night. There wasn’t much editing, and most of the work was on mixing. We had a couple of options how to mix it, and we found the best one. Then we did the mastering, and we actually met the deadline. We had everything in our hands for the Knotfest stream. And imagine this – everything failed!”

BraveWords: What do you mean, “everything failed?”

Eugene Abdukhanov: “On the day of the stream, YouTube’s algo rhythms banned the video. People didn’t see it on YouTube. Some people saw it on Facebook – but Facebook is not that platform. You can’t get as much interest as you can on YouTube. I personally was devastated. And that very night, our European manager told me that the label wanted to release this live album. I don’t know why we didn’t think of this before. But that was like a bolt of lightning coming from the sky – why not? Especially here in the time of the pandemic, where there are no real shows anymore – for a very long time. Having something like this out…it’s a good move in many respects. First of all, it will remind people what it was like before the pandemic. The show was in a stuffed room – one thousand Australian fans for the first time listening to Jinjer live on stage. The energy was…extreme. The whole room was electrified. This is what can be heard on the record. It is important. Secondly, we released Macro – our latest album – a year ago, and we never really had the chance to support it properly with tours. Because the pandemic just killed all our plans. We had around 100 shows booked for this year. And all of them were cancelled or rescheduled. Now, having the live album, half of the songs on this live album come from Macro. I think it’s a good way to support our latest official release. The combination of reasons just made us think it is a good idea.”

BraveWords: Which songs took on a new dimension being played live?

Eugene Abdukhanov: “Honestly, I think all the songs took on a new dimension being played live, because we are that kind of band that actually play live. We use almost no backing tracks. 90% of what you hear at our shows and what you hear on the album is played live. There are some backing tracks a little bit – just here and there – but mostly what you hear is pure live sound. And that was why it is clearly and aversely different than the studio record – because you are not a machine, you cannot play the same thing two times in the same way. You are not a computer – you are a human being. And all songs have their own live vibe. Most of the songs, we go from extremely heavy stuff to melodic stuff. A song like ‘Retrospection’ is one of my favorite songs from Macro. But at the same time, the live version from Melbourne is something that is magical. If you ask me to pick one song form Live form Melbourne, I will pick ‘Retrospection’.”

BraveWords: How did the band first cross paths with Slipknot, and get involved with Knotfest?

Eugene Abdukhanov: “We were playing in Kraków, Poland last summer. And we had Clown [Shawn Crahan] in our dressing room after the show. He was watching the show on the side of the stage when we played there – they were playing the same stage that night, as headliners. When we finished the set, his personal assistant came and told us, ‘Clown is going to come and visit you in your dressing room. Be prepared.’ We had a very good chat together. This is how we got into that camp. I’m extremely happy about cooperating with Slipknot and Knotfest – it’s a great team. Of course, bad things happen sometimes – like that thing with YouTube’s algo rhythm. But it’s nobody’s fault. But you see, even bad things lead to good things – now, we have a live album. It’s great to have Knotfest on our side, because they help us a lot with promotion. They regularly publish news items about us. They like us and we like them. So, I’m quite happy about this.”

BraveWords: Is the band still based in the Ukraine?

Eugene Abdukhanov: “In the most way. Tatiana and I, we spent a lot of time in the US this year. When the pandemic started, she went to Los Angeles and I went to Los Angeles, too. I was there from March through mid-August. She came back to the Ukraine a few weeks after me. We are still based here in the Ukraine. I like the States – I like being there on holidays and I love touring in the States. I love the American audience. But, if you ask me if I’d want to move to the States, I don’t think so. I’m just European. [Laughs] I’m just European for place of residence. But as soon as the world gets back on its rails and gets back to normality, I hope that we will be back – and America is one of the first places to tour. Actually, the spring tour is still on – it is not cancelled. Its status is rescheduled and we are planning to announce new dates as soon as possible. And again, as soon as the pandemic is over, as soon as it safe, we will be back to the States.”