In a run-down part of the state capital, City Gardens had a history all its own (so much so, there's a documentary about it: check online). Saw several shows there, most notably Coroner, The Cramps, and the rising (at the time) sons of Japanese metal: Loudness, fresh of their Thunder In The East success. Already a known entity, thanks to college radio spinning albums in their native tongue, the Anglicized lyrics and slick packaging began opening doors in the Western world. Early, non-alcoholic Sunday show. Kicking off the evening was South Jersey's own Krank (released Hideous, on Metal Blade in '86), who were always more dangerous live, than on record. A mix of glam imagery (inhabited the same same club, The Galaxy, which spawned major label signees Cinderella and Tangier, along with a host of teased hair wannabees) and pre-MTV Twisted Sister NJ/NYC aggression. The mainstays were/are Kevin Mercer (guitar) and hulking singer Frank Tyson, then quite the figure in two-tone hair, spandex pants, a tri-pronged spike protruding from his groin. Ouch! 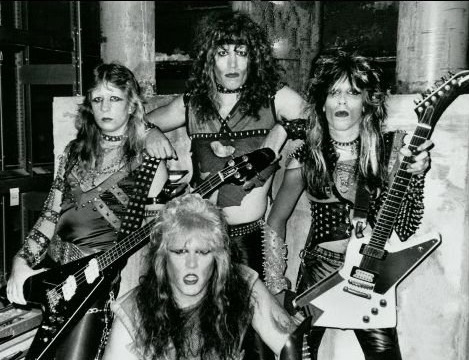 Ah, the old Coliseum... original home to the NBA's Cavaliers (No, LeBron James didn't play there), since plowed under. Was located in the middle of nowhere, halfway between Cleveland and Akron, cities with plenty of college kids and hopping bar scenes. Fresh from graduating college, as metal took a turn for the heavier (increased prominence of thrash, doom, proto-death, etc. especially those of us in the underground circuit: reading fanzines, listening to college DJs, or experimental satellite radio, like Z-Rock), the stylings of Turbo were unwelcome in our circle. Bristled at the poppy, guitar synth anthems (which would hopefully be minimized, onstage) and exalted in the classics, but attended JP show anyway, mostly out of deference to their status/history. Snobbishly, our eyes/ears were already trained on the Bay Area and continental Europe, rather than the English masters, who were no longer the exclusive province of diehard headbangers, having been embraced by the general population and FM radio. Seeking newer, more existing sounds, the lure of Priest, Maiden, Sabbath, Ozzy and Dio paled, in comparison to bands with members (like us) in their early twenties. Believe it or not, such hipster/elitist views had already begun to creep into our jaded view of Metallica, circa Master Of Puppets. Must admit, had had enough of tour aired tracks "Metal Gods", "Breaking The Law", even "Living After Midnight", by then. The dearth of quality metal throughout the Nineties and into the early part of the new millennium made me reappreciate the parts of the Priest catalog that had fallen out of favor, even the pariah "Turbo Lover".

June 3, 1987 - MEGADETH and OVERKILL at Phantasy Theater in Lakewood, OH

So imagine the underground mindset, a year removed from the above. The healthy club scene in Cleveland enabled Overkill to play the city three times, in little more than a year, as they criss-crossed the country, solo and opening for both Slayer and Megadeth. This particular night has been released, as live albums, from both acts: Mega Dave including the entire show on the 25th anniversary edition of Peace Sells. Can still remember standing near the front (years later would self-relegate myself to the back of most halls, for the performances), periodically sticking my head into the massive, stage-side amplification unit, as the band blasted away. Ah, the stupidity of youth! Instead of waiting a couple of decades, Blitz & Co. commemorated the beastly hot event by issuing the The Fuck You Ep the next month. Reportedly 115 degrees, indoors, everything and everyone was dripping sweat, even the walls of the old, Vaudeville era theater. Inadvertently, thus began my presence at Overkill live recordings. We returned to Cleveland, in '95 for Wrecking Your Neck (my blurred photo was used for the back page of the CD booklet, as well as for the cover of the single). My mug can be seen repeatedly in the photo pit at the '02 Asbury Park show that became the DVD and accompanying Wrecking Everything: Live. The Wacken show, in '07, our paths crossed again, but I didn't make a conscious effort to attend BECAUSE of Overkill, had been an annual pilgrimage to Germany since '00, but when they announced their intent to play the debut and Horrorscope, back-to-back, DID make the trip, exclusively to Oberhausen (Overhausen!) for the show.