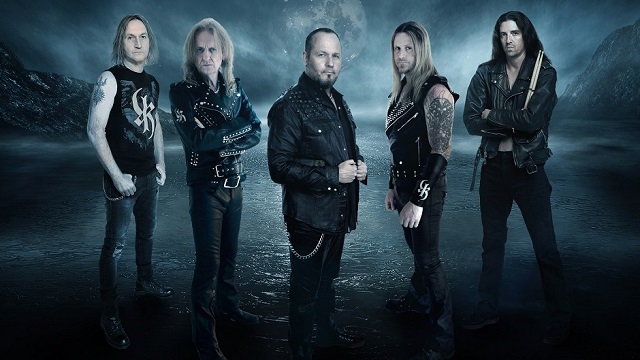 Screaming for vengeance, K.K. Downing is.

But he’s letting his guitar—and his words right there on the record—do the talking, Finally it’s here, his first solo(-ish) album, Sermons Of The Sinner, using the band moniker KK’s Priest—perfect. Crucial to the band is a second Priest alumnus, Tim “Ripper” Owens, whose performance on this record is one of the most emotive and thespian of his career. Joining the guys on this shoot-‘em-up metalfest is guitarist A.J. Mills, bassist Tony Newton and drummer Sean Elg, who replaces the sidelined Les Binks (sounds like he’s sidelined for good).

Some of Sermons Of The Sinner was recorded on site at K.K.’s estate, some at Steve Harris’ Barnyard Studios, with Ripper doing his vocals at home in the US. What they’ve come up with is a rich collection of songs, from the unapologetically purist metal to the proggy and dark, with loads and loads of killer K.K. guitar work everywhere. All told, it’s the perfect strategy for a guitarist’s solo album, with Ken writing all the music and lyrics, playing a lot, and then, the tough part, having right in front of him the perfect singer, an element that is always the hard part in making anyone care about a guitarist’s album. In other words, lucky for him, Judas Priest had a singer to spare, with Ripper Owens being a consummate heavy metal treasure to boot.

“It’s definitely mission accomplished,” explains a relived K.K., “because I feel it was enjoyable, fulfilling and I really like the final product. I guess if I don’t have the good sense or the feeling now as to what classic and true metal fans want, you know, from KK’s Priest, then I need to go back to the drawing board (laughs). It’s been a great journey, with great relationships. So yeah, hopefully the album, Sermons Of The Sinner, where the sermons are the songs, putting it all together, there is so much more to rejoice and to celebrate in these sermons, so many sentiments and emotions and just everything in one package.”

Asked about the album cover image, K.K. says, “Obviously it’s quite ambiguous. Is it me in the cloak? Could it be me in the cloak in the past? Could it be me in the present or it could be me in the cloak in the future, or, indeed, could it be another entity? But I would like the story to unfold, Martin, because there’s a long way to go yet. I’ve already got some preconceived ideas for the next album, including the artwork and some titles and, in actual fact, the music for the songs. So I want the story to continue, kind of flowing on from the same premise here, so the whole thing will unravel as we go along.”

“Not really too much,” answers Ken, asked how he’s changed as a guitarist since his last Priest record, Nostradamus. “I probably started to change as a guitar player some time during Ram It Down maybe, if not just before. But I didn’t get to do, guitar-wise, as much as I wanted to and should have done, and I think that that was obviously an error of mine, really, not to really push forward in that way. So what you see now is really me doing what I should have and could have done, throughout my life in albums, throughout the 2000s up until 2010 and really now. I get to speak a lot more guitar-wise and show people what I should have always done.”

“He’s writing what he’s always written,” adds Ripper, who echoes what K.K. is alluding to, this idea that Glenn Tipton sort of crowded him out in Priest as the years added up. “But I think the big thing is he’s doing what he wants. When you do something like this, you go, hey, this is how I’m going to do it. I don’t have you to tell me this can’t be done. When you’re in a band you always hear, well, I don’t like that or this isn’t you or you can’t do that. He finally gets to go, ‘I can do whatever I want whether it’s right or wrong.’ I mean, when you hear the songs, it sounds like K.K. Downing.”

“What I always tell people is that this shows K.K.’s life,” continues Owens. “Basically he wanted to write songs about fans and write songs about being on the road and songs that have a connection with his career. He just wanted to connect with people. He’s not out there to write about politics or what’s going on in the world. He’s writing about everyday life, what’s going on with him. So yeah, I think it’s cool that he’s thinking about his career and what he does for a living and the fans and musicians and everything connected to him.”

As for the second record… “It’s gonna be different because he’s got a whole unit,” says Ripper. “We can put influence in from the start. A.J.’s been a friend of his and with A.J. in the band, A.J. has got a great voice and he can sing parts like me. See the best part was, Martin, is when Ken wrote this, he wrote it for me, thinking… that’s what the best part is. It’s not like he wrote a record thinking, ‘This is how I want the singer to do it.’ He was writing a record going, ‘Okay, Ripper can sing this, so this is how I’m going to write it. This is how he sings.’ I think once he found out that he wasn’t doing a 50th anniversary thing with Priest, that there was no doubt he wasn’t gonna be involved with the 50th anniversary tour, that’s when he just locked himself away and started writing.” 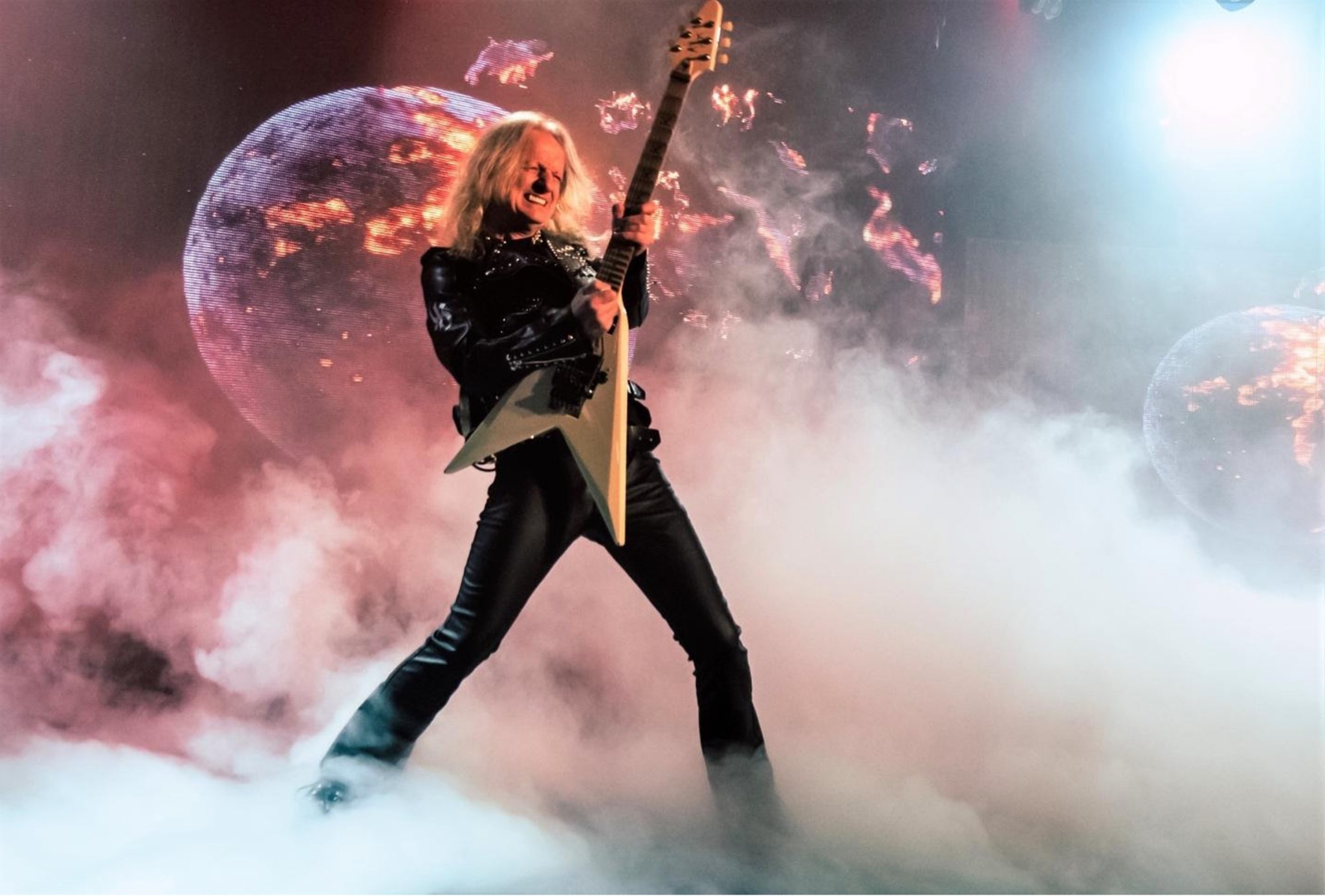 K.K. picks up the tale, explaining that, “Yeah, I just got into the lyrics because I was on my own at Christmas 2019 when I was putting everything together. And because I was so hungry and it was all coming together so fast, I was so hungry to hear how the album would sound and to make sure that the music was a good vehicle for lyrics. I couldn’t resist getting stuck into writing some melody lines, and then actual lyrics as well. I enjoyed doing that, because I’ve done that before and I can do that. So I just got on with it. I wanted to know that we had an album of songs and that it was an album of good songs. And only then I really got excited to give the guys a call and say, ‘Okay, I’m confident we’ve got a very good record; let’s… who’s in? Thumbs up?’ So I made the call and we just went on from there.”

“Irrespective of what, you know, some of the non-believers or even haters might want to portray, I think I’m really happy and proud of everything that’s on the album, because everything… all the songs have a meaning. There’s an explanation for everything and that’s a good thing. Because if people say, ‘Well, what’s that song about?,’ then I can elaborate on that. Some of the songs may be fairly simplistic in nature, but so much of the material… it’s about what I’ve done all of my life. From ‘Living After Midnight’ to ‘Breaking The Law’ to ‘You’ve Got Another Thing Comin’’ to ‘Heading Out To The Highway’ to ‘Parental Guidance’ or whatever, it’s pretty straightforward stuff. It’s kind of parking lot songs; you know, let’s get to the venue, crate a beer in the trunk of the car, let’s go meet our friends—we’re gonna rock out.” 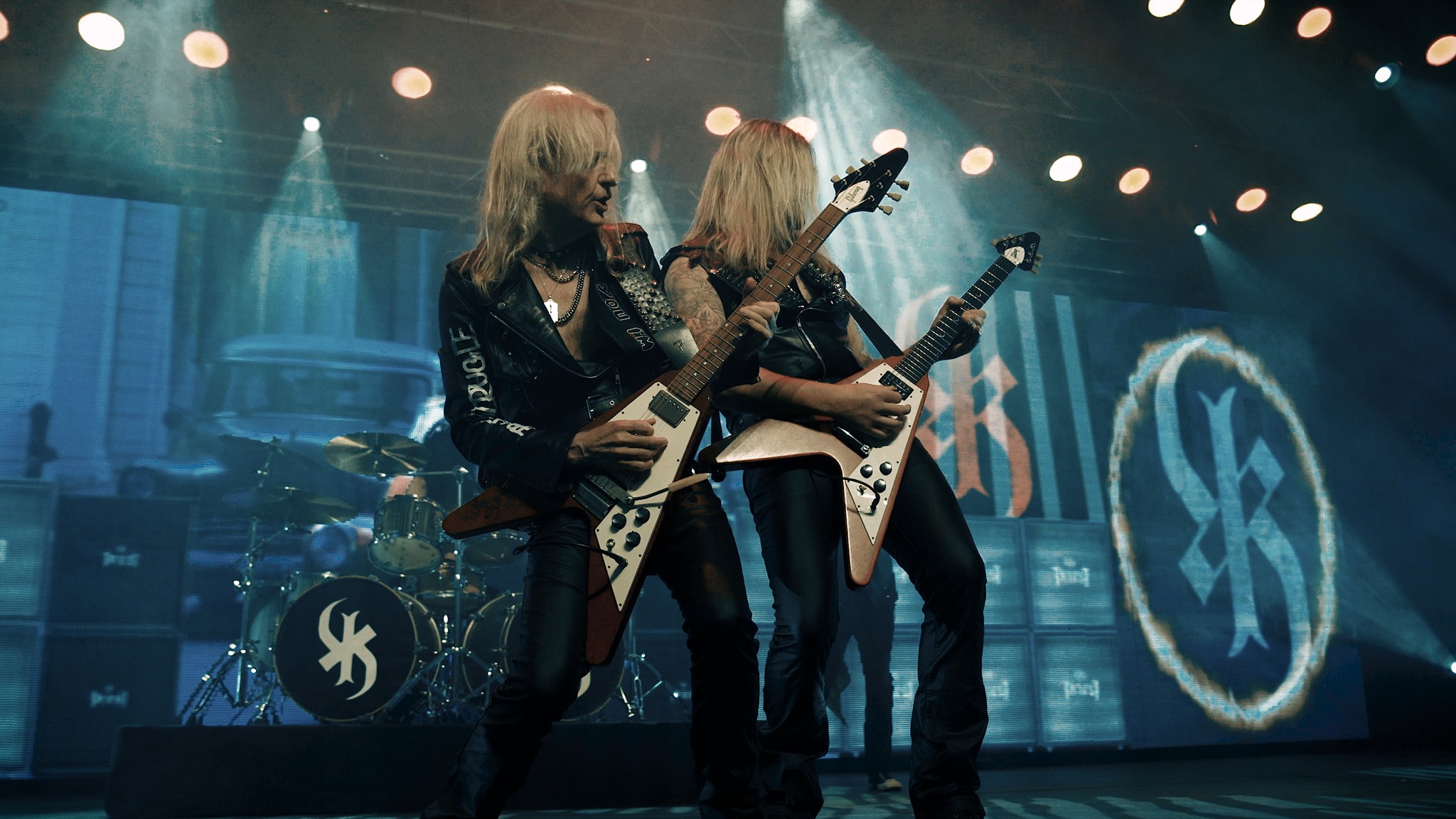 “And so songs like ‘Brothers Of The Road,’ ‘Raise Your Fists,’ ‘Wild And Free’… we have those typical kind of ‘what you’d expect from me’ songs in there, but they’re also a main and essential ingredient to a classic, what we’d call ‘true metal’ album—and I think that that’s what this is. Set against that, we’ve got other stuff that’s deeper and more emotional, more elaborate musically, with more orchestration on there, songs like ‘Return Of The Sentinel’ and ‘Sermons Of The Sinner.’ There’s a lot more meaning involved, more messaging in there, more poignant lyrics. But at the end of the day it’s all very similar to what I’ve done so many times in the past, where you’ve got all the Priest songs I mentioned before sitting very well alongside songs like ‘Blood Red Skies’ or ‘Victim Of Changes’ or ‘Beyond The Realms Of Death.’ So the composite is an album of a lot of colour, mixed tempos, mixed sentiments, mixed emotions and mixed song keys. Everything works very well together for the listener. That’s why I was so happy now that the album is finally out and everyone can listen to it from beginning to end as a piece of work, as it was meant to be listened to.”

Look for KK’s Priest, in conjunction with capable manager Andy Gould, to try put on a production that has them supporting in larger venues, rather than headlining clubs. In further discussions with Ken and Ripper, this seems to be a clear challenge that the band is embracing. As Ripper warns, “Ken’s not gonna play clubs. We either don’t play at all or it’s that. If it’s not done right, we’re just not gonna go do it. This is a big thing, with big stages and big production. Ken doesn’t have to do it. Basically he wants it to be done right. He wants the fans to have a good show. This has to be bigger than life.”